“The heart was meant to be broken,” Oscar Wilde said famously. Then again, he wasn’t on Facebook.

As if breakups weren’t bad enough, Facebook puts another nail in the coffin: A little red broken heart icon that advertises your new “single” status to 500 of your closest friends.

When 27-year-old Laura caught her boyfriend cheating, via Facebook no less, she promptly changed her status — online and in real life — to single. But it wasn’t as simple as checking another box.

“It was bad when people like your 53-year-old aunt have to see personal stuff,” says Laura. “They’re just there to keep in touch and see photos, not be witness to my drama.”

Worse was feedback from the peanut gallery. Convinced they were reveling in I-told-you-so’s, Laura received a handful of unwanted notes. “Married women from high school were telling me to not worry, someday I’ll find someone,” she fumes. “We haven’t talked in five years and now you decide to contact me?”

This story has all kinds of Facebook faux pas, says Karen Cleveland, an etiquette expert in Toronto. “There’s a handy little tool that removes your relationship status altogether, so you’d never have to contend with this issue,” she says. But if broadcasting your bedfellows is important to you—which for some people, particularly women, it is—follow this simple rule: “If you wouldn’t talk about it at a cocktail party, don’t post it online,” says Cleveland.

And for those sitting on the status fence, consider this: Starting in 2010, Facebook plugged your heartbreak into a large-scale study to analyze when your relationship is most likely to heat up and sizzle out.

For the romantics, expect a relationship spike on Valentine’s Day (with 49% more new relationships than breakups) and Christmas (at 34% more hookups). April Fool’s Day also sees an odd increase, though April 2nd sees an instant reversal (hilarious, you guys).

And for the cynics, some breakup stats: It seems Fridays and Saturdays are peak breakup days, as is the summer. So after a boozy long weekend in August, expect a slew of sad broken hearts in your morning newsfeed.

“If you know the wounded well, respond offline. Call them up or send them flowers,” advises Cleveland. Otherwise,
zippit.

For those craving the silent treatment, try 25-year-old Briar’s breakup trick. “Because we had a hundred mutual friends, and I didn’t want to make a scene, I discreetly made my status private. Two months later, after a buffer to tell people myself, I was ready to be ‘single’ online,” she says. These days, she’s keeping her status private. “No one needs to know anything. It’s nobody’s business.”

Hear that, social media gossips? Even treading carefully, Briar still got awkward messages of people wanting dirty details (quit doing that, folks!). She resisted both the urge to vent and to tell people to butt out, as there’s good etiquette for dealing with Nosy Nancys too.

“Respond when you’re ready, as you feel comfortable. Appreciate their concerns, but don’t feel obligated to say more,” says Cleveland.

But if a genuine friend reaches out to you, by all means take up their offer for support. Breakups are always tough — even tougher in a public medium—and some in-person friend time might be just the thing. Over wine, just like Oscar Wilde would. 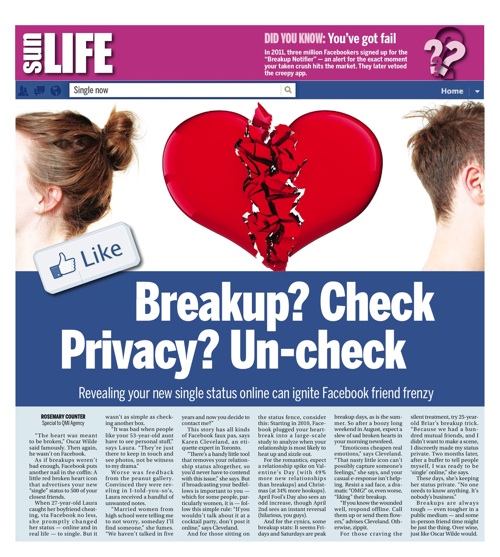