Dentists are now offering Botox for cosmetic purposes, blurring the line between beauty and medicine

Vancouverite Bonnie-Lynn Holter sees her dentist every six months, as you should. Like you, the 47-year-old project manager is examined, cleaned and polished, but then—probably unlike you—Holter gets an unlikely dental service: 70 units of Botox, plus maybe a dermabrasion or a laser treatment. “I’m already there, I don’t have to make another appointment, I don’t need to land on a wait-list,” says the busy mother of two. Two decades of competitive hockey goaltending left her all too familiar with reconstructive surgery—she’s had a rhinoplasty and a septoplasty. She’d been getting Botox for years, both at a clinic and through her GP, when she discovered dentist Warren Roberts’s A Smile Above.

It’s a medical specialty spa, according to Roberts. On top of general dentistry, skin care, laser hair removal and facial rejuvenation (including Botox and fillers) are on offer. There’s even an in-house photography studio. Since B.C.’s College of Dental Surgeons included Botox within the scope of dentistry in 2007, “medi spas” like Roberts’s have increasingly blurred the line between beauty and medicine.

It’s legal, but is it dentistry? For a decade, Canadian dentists used Botox medically—for teeth grinding, jaw pain and so on—but, unlike physicians, they couldn’t legally prescribe Botox to a patient for cosmetic purposes. B.C. has changed its position, and this June, the Royal College of Dental Surgeons of Ontario compiled a panel of five experts to review “what and who should be using Botulinum toxin—if at all,” says committee chairman and dentist David Mock. If the college decides cosmetic Botox falls within the scope of dentistry, the result could be a Botox boom in the province.

A more immediate result is a turf war between medical professionals now forced to share the market. “Any plastic surgeon or dermatologist is going to say ‘Of course dentists can’t do it,’ ” explains Louis Malcmacher, a dentist and president of the American Academy of Facial Aesthetics, who gives lectures on Botox and dermal fillers at the University of Toronto’s faculty of dentistry. (One course outline carefully notes that since those cosmetic treatments aren’t allowed by dentists, “The subject will be covered for information only.”) “A dermatologist will be in the same war with a physician,” says Malcmacher, “who’ll say that nurses shouldn’t be doing it either.” Of course, in Ontario, nurses are doing it, as are general physicians, dermatologists and even gynecologists.

And, by getting creative, so are dentists. Thousands of them advertise “cosmetic dentistry”—an unregulated and, for some, unethical term that merges dentistry with a plethora of other cosmetic improvements, including Botox, for a market that demands it.

If there is a turf war over Botox, some patients are benefiting from it. Rose, a 50-yearold management consultant from Toronto, is no stranger to Botox. She’s also a savvy shopper. “I’m not so sold on anything that I won’t go looking for a better experience,” says Rose, who didn’t want her last name used. “If I’m going to do anything, whether it’s Botox or buying a car, I do my research.”

When Rose’s preferred aesthetician retired, a sour experience with a plastic surgeon left her unimpressed. “All I could see were promotions and advertisements and posters bombarding me for cosmetic work,” she says. “There might as well have been a billboard.”

Her dentist’s office, in contrast, offered subtlety. After 18 months as a patient, Rose was asked by the friendly receptionist—herself looking very fresh these days—if she was interested in a little tweak. “Because I had absolute faith in the practice, because of their quality and professionalism, I said yes.”

The dentist, Carol Waldman, isn’t allowed to prescribe Botox. Nonetheless, her clinic offers the service. Once a month, Waldman brings in a local physician—who declined to participate in this article—into her practice to examine the patients and provide it. “So they’re not really seeing a dentist, they’re seeing a doctor in a dentist’s office,” explains Marion, the receptionist, who’s also treated by the visiting doctor. “Patients started saying, ‘Gee, you look great!’ And I said, ‘You can too.’ Then I made up a little sign.”

Of Waldman’s 1,500 patients, about 50 take advantage of the discreet offer. “I think there’s only one or two patients of ours whose husbands know,” laughs Marion. A biannual cleaning matches almost perfectly with the four to six months Botox usually lasts. And, while it’s not covered by insurance, a slightly larger dental bill (Rose spends $500 for a full-face treatment) lets some customers enjoy Botox on the sly.

Irwin Fefergrad, the registrar of the Royal College of Dental Surgeons of Ontario, has no problem with any of this. “It’s not a loophole,” he says. “I think it’s very responsible of the dentist to do a referral to someone’s who’s trained.” Waldman, however, thinks the distinction is arbitrary. “They believe they’re protecting the public by not letting us do Botox, but the public is no more protected with a physician,” she says.

The College of Physicians and Surgeons of Ontario requires no specific training or expertise to administer Botox. It’s considered by Health Canada to be a relatively safe procedure with rare side effects. “It’s caveat emptor,” says ophthalmologist Jean Carruthers, the plastic surgeon who brought Botox into Canada and remains at the forefront of research and development. To her, Botox is an art that requires talent and experience. “You’ve got to be able to read the face. It’s not enough to have a cookie cutter,” she says. “But if dentists are willing to learn to do it properly, then fair enough.”

Botox isn’t generally taught in dentistry school. A dozen Botox-for-dentists workshops are taught privately across the country, and the Pacific Training Institute for Facial Aesthetics in Vancouver, founded by Roberts, offers two-day intensive courses across North America to medical personnel, who Roberts says are desperate to learn the skill. Two days is ample, Roberts maintains. “The average dentist in his first year does more injections, on awake patients who move and squirm, than the average physician does in his whole life.”

“With a little bit of extra education, there’s no doubt the average dentist can do most Botox injections within his area of expertise,” says Mock, whose panel is expected to issue a final report by this fall. “What concerns me is the concentration of well-trained people—be they dermatologists, dentists or other medical professionals—doing Botox versus treating disease,” says Mock. “To me, cosmetic Botox isn’t a health issue, and it’s not something I’m proud to see my profession spending their time on.” 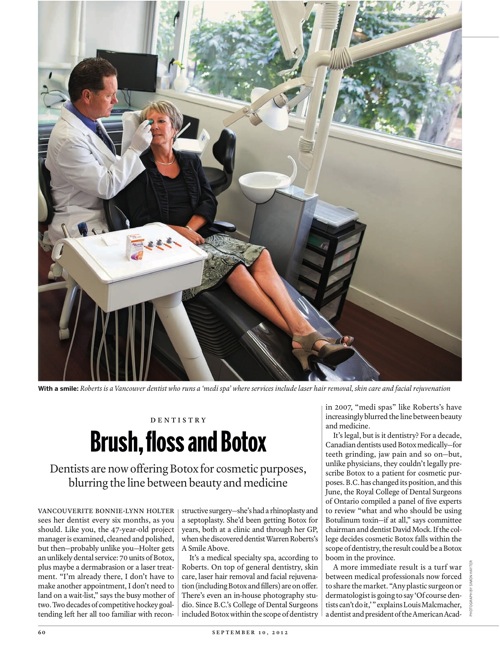 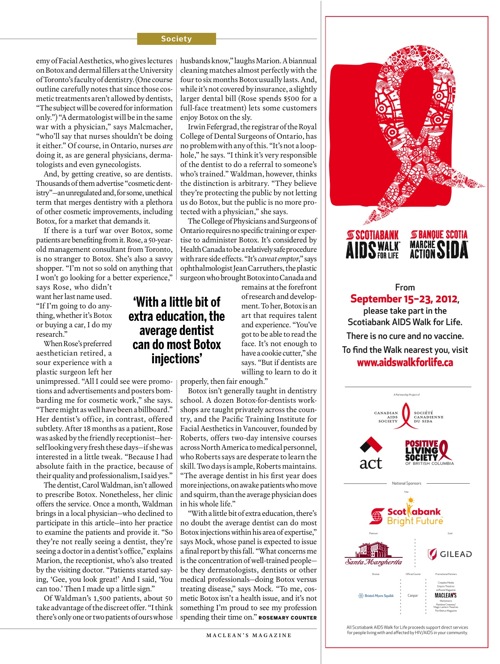