Enjoy a breath of fresh caffeine

After a couple of hits of the AeroShot, energy levels spike and the gym beckons

With a scaled-back but hardy three-cups-a-day coffee habit, I can’t deny the surge of excitement when I got my hands on my latest fix: an inhalable shot of caffeine. AeroShot Pure Energy comes in an unassuming little grey canister, small enough to slip into a pocket, and promises “breathable energy: anytime, anyplace” plus a hit of vitamin B.

After my first dose I got a mouthful of sour Splenda-esque powder, the manufacturer’s not-so-successful attempt to mask caffeine’s naturally bitter taste. But like any good addict, I was opening another 100-mg canister within the hour. Then I hit the gym harder than I had in months.

AeroShot joins Le Whif, inhalable chocolate without the calories, created by Harvard biomedical engineer David Edwards. He came up with Le Whif after a boozy lunch outside Bordeaux just as France was about to outlaw smoking in restaurants. When Le Whif sold out before it even launched, the next logical vice to satisfy was caffeine. Last week it went on sale at convenience stores in Boston and New York, including 7-Eleven. It’s also available from the Paris-based online shop the Lab Store.

Just like a coffee at Starbucks, AeroShot is available over the counter, with no age restrictions, for $2.99. But while you would usually have to wait 20 grumpy minutes to feel caffeine’s effects, this way, “absorption begins instantly in the mouth and isn’t degraded in the stomach,” explains Edwards.

Breathable Foods, the Massachusetts-based company that makes AeroShot, began marketing its cutting-edge product a few months ago on Twitter and Facebook. After it shipped 30,000 free samples around the globe, people were talking about it. “We’ve had dialogue with hundreds of thousands of users and the general reaction is it’s convenient, and it works,” says Edwards.

Though the product is not intended for people under 18, university students during mid-terms were fair game. AeroShot reps began the marketing campaign in January with a tweet: “Hey Columbia students! Team AeroShot is on campus today!” The students, of course, tweeted right back. Reviews tended to fall on either end of the spectrum, from the ecstatic (“I’m gonna go run 10 miles now!”) to the dismal (“Heads up to friends, never try @aeroshotenergy. Horrible and will make you nauseous”). Much like coffee, those who hate it really hate it, and those who love it, love it a lot.

New York Democratic Sen. Charles Schumer asked the Food and Drug Administration to review the safety of inhalable caffeine given the “likelihood” it will be used with alcohol by young people, much like they mix caffeinated beverages with booze. The FDA said it “will review information brought to our attention about this product.”

In October, Health Canada reclassified energy drinks from a “natural health product” to a food with labelling requirements for safety. The department also introduced new rules capping the amount of caffeine allowed at 180 mg per single-serve drink and requiring a warning not to mix them with alcohol.

But Edwards says AeroShot is well within the limit and contains a quarter of Health Canada’s recommended daily intake of no more than 400 mg, not to mention that it cannot physically be mixed with vodka. “Given that AeroShot is not a drink that can be poured into another drink, the device is then a barrier to use in this sense,” he explains.

Like anything, when it comes to caffeine, moderation is the key. But, as usual, moderation isn’t easy. Edwards advised against my strategy: overloading, exercising hard, then crashing out with a headache.

He argues AeroShot may support a healthier habit. “We normally overdose ourselves with a big hit that spikes caffeine in our blood much higher than we need it,” he says. “The right way is to take just enough to get into your therapeutic window, if you will, then take what you need when you need it. This product allows you to do just that.”

But there’s no right way to enjoy caffeine for serious addicts; for them, AeroShot is just one more way to down the world’s most popular stimulant. 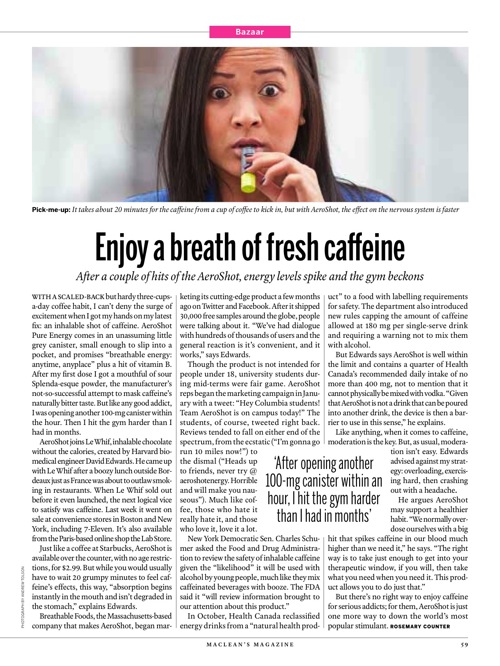