Imagine you’re a mid-twenties human with a partner named Alex. It’s Monday morning and you didn’t sleep well. You struggle with motivation issues at a boring job. By Friday you’re exhausted, but Alex wants to take you to a party. Your choices: 1) shake off your funk and go have a blast; 2) agree to go, reluctantly; 3) say you’re not feeling well and can’t make it. Positive thinkers might want to choose 1), but in the online game Depression Quest, you cannot. Since you haven’t been seeing a therapist or taking your meds, having a blast just isn’t an option.

Launched on Valentine’s Day—a hat tip to the most depressing day of the year—Depression Quest makes it clear it is not a game like most others. “This game is not meant to be a fun or lighthearted experience,” it begins, sad piano music playing over a grey background. Instead, it presents 150 unique encounters to the 200,000-odd gamers who’ve played it online. Content is generated by your decisions, which affect your depression level, which then limits your choices. Its creators, Boston-based developers Zoë Quinn and Patrick Lindsey, are both serious gamers who struggle with depression. Neither saw their experiences reflected in the community. “It’s a topic most games don’t explore, and those that do dress it up with layers of metaphor and imagery,” says 26-year-old Lindsey, a transplanted writer from Toronto.

Their game is one of a slew of recent ones aimed at exploring issues of identity and mental health. Richard Hofmeier’s Cart Life, an exploration of poverty among food-cart workers, won top prize last month at San Francisco’s Independent Game Festival. Dys4ia, developed by a gamer who calls herself Anna Anthropy, is an autobiographical game about the experiences of a transgender woman. And Actual Sunlight, from Toronto creator Will O’Neill, explores “depression and the corporation.”

The 32-year-old O’Neill is a creative director by day and “hardcore gamer” by night. Actual Sunlight is his “largely autobiographical” story of a “fat, boring loser” who takes transit to work, loiters around a filthy apartment and speaks to his imaginary therapist. As in Depression Quest, options are limited. “You control the player, but your agency diminishes over time as a reflection of his depressed state,” he says.

Gaming as therapy is a controversial idea. The pursuit is more often associated with increased risk of depression and anxiety—a 2012 Swedish study found computers in general and gaming in particular was associated with stress, sleep disturbances and depression in young adults. But in an Australian study, researchers found a fantasy game-based treatment called SPARX was as effective for treating adolescent depression as clinical counselling.

Championing the change is Jane McGonigal, a game designer and author of Reality is Broken: Why Games Make Us Better and How They Can Change the World. In her 2012 TED talk, McGonigal talked about a dark period in her life. “I spent three months in bed, wanting to die,” she said. Following complications after a concussion, she had “non-stop headaches, vertigo, memory loss and mental fog.” Doctors suggested she rest her brain—no reading, writing, work and especially no video games. Instead, after 34 days, McGonigal decided, “I’m either going to kill myself or turn this into a game.” She created a roleplaying recovery game, Jane the Concussion Slayer, avoiding her real-life symptom triggers (bright lights, crowded spaces) and rewarding good habits—taking a walk, cuddling a pet. “That fog of depression went away. I still had the symptoms, but I stopped suffering.” The game is now sold as SuperBetter.

But don’t expect miracles, says Toronto psychiatrist Bruce Ballon from the Centre for Addiction and Mental Health. Ballon works in the simulation field, creating award-winning games dealing with mental health and addiction. Ideally, he’d take a blended approach. “I’d sit down and let the person play this game and discuss every step of the way.” Rethinking and reforming thought patterns is, after all, a slow process. Of Depression Quest, he says, “I don’t think it will help your depression, but it might help you understand your depression.” 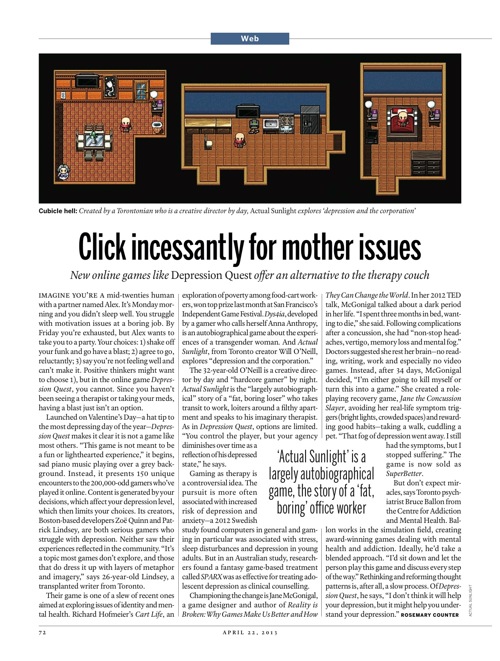