Previously dismissed as lesser or defective, new research is revealing that the teenage brain is just as powerful as any adult’s

Just a few years ago, the teen brain was largely dismissed as all gas and no brakes. Research dwelled on its immature prefrontal cortex—the executive-control centre that tells teens to, say, drive slower or wear a condom—and increased sensitivity to the rush that risk provides.

But new research is telling a different story. As advancing magnetic resonance imaging (MRI) technologies prove neuroplasticity is an ongoing phenomenon, the idea of the teen brain as lesser or defective is being challenged.

“There’s no deficit in capacity between the teenage and adult brain,” says Howard Sercombe, the sociology professor at the University of Strathclyde in Glasgow who uses the gas-and-brakes analogy. “In terms of computing power, the teenage brain is an adult brain.” Sercombe works alongside neurophysiologists in an effort to understand young brains, which are more agile when it comes to creating new neural pathways. “Teenagers have the unique combination of maximum computing power and maximum flexibility.”

Harnessing the power and potential of the teen brain has huge implications for mental health. Leading the way is the Saguenay Youth Study, a large, longitudinal study of teenagers in Quebec
that began almost 10 years ago.

Back in 2003, Guillaume Collard, now a 26-year-old student and sous-chef from Saguenay, noticed an ad at his high school for the study. Like many teenagers, Collard was driven by a mix of boredom and altruism. “I wasn’t involved in much of anything, and my social conscience made me want to get involved,” he says.

So, for modest compensation, Collard enrolled in the Saguenay study, which measured everything from memory and cognition to cardiovascular and metabolic health. “There were meetings at school, a test on the computer, a written test,” says Collard. “Then we had medical tests at the hospital, where we saw specialists.”

One of those specialists was neuroscience pioneer Dr. Tomás Paus, the director of the project. “We collected data over many years from more than 1,000 teenagers aged 12 to 18,” says Paus, a senior scientist with Baycrest Health Sciences’ Rotman Research Institute in Toronto. But his study, which explores gene-environment interactions, would never work in a genetically varied and
multicultural city like Toronto. “When you’re interested in genetics, you want less heterogeneity, both in genetics and cultural habits.”

Paus moved his work 200 km north of Quebec City to Saguenay, a picturesque region known for whale watching along its fjord, at the confluence of the St. Lawrence River. Here, the Founder Effect—a loss of genetic variation when a population remains relatively isolated—has created a “blank slate” for genetic testing.

With funding from the Canadian Institutes of Health Research and the Canadian Foundation for Innovation, Paus measured the blood pressure, heart rate, body compositions, lipid levels, glucose and sex hormones of the Saguenay teenagers. Each participant also did six hours of cognitive tests, including a self-reported lifestyle and mental-health questionnaire, and MRI scans. They’re now in the process of scanning and testing the participants’ parents.

The result is a scientist’s dream: a wealth of specific, intricate data with limitless potential for extraction. More than 30 studies have already been published using Dr. Paus’s research. One linked prenatal exposure to cigarette smoke to the accumulation of 33 per cent more abdominal fat in the children as teenagers. The teenagers whose mothers smoked while pregnant were also more likely to experiment with drugs and alcohol, suggesting smoking may interfere with the brain’s ability to evaluate rewards.

Another found adolescents with higher resistance to peer pressure showed more activity in the prefrontal cortex, suggesting stronger connections between decision-making parts of the brain. Chip Limeburner, 20, who participated in the study between the ages of 10 and 15, remembers his experience fondly. “So many of the tests—brainteasers, tangrams—were like games. And hey, it was a day off school.”

The Saguenay Youth Study reflects a new interest in the teen brain by experts in many fields. For Amir Levine, an adult and child psychologist studying adolescent brain development at the Centre for Addiction and Mental Health in Toronto, adolescence is a fork in the road. “People are starting to understand the period as a critical point in time where you can change the course of mental illness,” says Levine. Dramatic changes in white matter, depending on their trajectory, can make any situation much better or way worse.

Many mental illnesses are manifested in adolescence and early adulthood. “The majority of people who will become depressed will have symptoms in adolescence; most people who suffer from addiction begin experimenting in adolescence,” he says. Serious disorders such as schizophrenia often show up in young adults. Studies like Paus’s, says Levine, “are a huge undertaking and very expensive, but they enable people to ask many different questions. They can identify risk factors years in advance.”

Take, for example, dementia, which is only party genetic. “Fifty per cent of cases are attributable to modifiable conditions—midlife obesity, hypertension, diabetes,” says Paus. For anyone predisposed to the condition, controlling their environment (through physical activity, eating habits or restricting alcohol use) could prevent onset. “If you know your weak spot, if you know you’re genetically vulnerable to dementia, then you’ll know what risk factors to modify and how.”

This is what Paus calls “personalized prevention.” Others have called it “P4 medicine” (that is, predictive, personalized, preventative and participatory). “If you’re able to predict the risk for you, you’re also able to understand and intervene,” says Paus. Depression, addiction and anxiety, for example, could be pretreated with cognitive therapy, medications and modified risk factors. Nurture the teen brain, and you might mould it into a healthier one.

But, like all innovations, personalized prevention raises some concerns. “My only reservations about individual profiling is that it’s unlikely to be cheap,” says Sercombe. “This is a world where little kids don’t have clean water but a middle-class white man can pay to know he’s got a 70 per cent chance of dying early if he doesn’t keep an eye on his prostate.”

Then there’s the issue of practicality, says Levine. “With adolescence, which is already a very small window of time, you have to get their parents’ consent and you have to find kids to reliably come in and participate.” When it comes to habits and personality tests, teens are notorious for selective truths and wishful thinking. Or worse. “I remember falling asleep in the MRI machine once when I was supposed to be paying attention,” confesses Limeburner. “They had to re-do the test.”

Luckily, he’s much more interested now: Limeburner is a second-year McGill University student majoring in neuroscience. He’s even working with the leftover data from the very study he participated in. “I’ve obtained the images of my own brain,” he says. At 20, Limeburner’s no longer an adolescent, but he hasn’t lost his teenaged sense of humour: “I’m thinking of printing them on a T-shirt.

Young Turks:
Most of us are relieved to survive adolescence, but is that state of mind key to human survival? Possibly, says sociologist Howard Sercombe. “Maybe the human species survived because of the teenage brain, not in spite of it.” A desire for exploration and novelty, despite the accompanying dangers, is actually “a pushing into the world that’s necessary for emerging adults to project themselves out of the nest.” Adults see unnecessary risk and melodrama, but the combination of passion and bravado provides a way to challenge and change the status quo—ideologically, like the hippie or Occupy movement, but also physically. “Historically, communities without enough young men with capacity for explosive violence just don’t survive.” 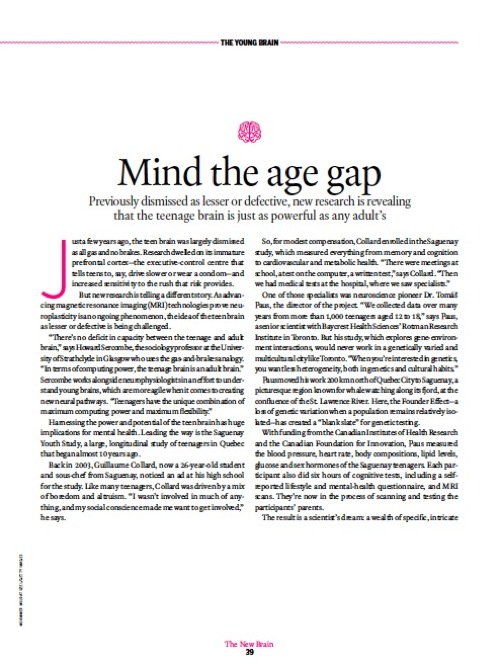 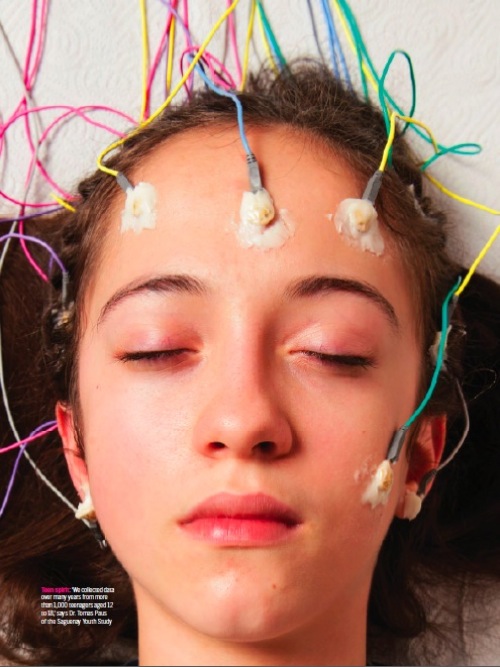 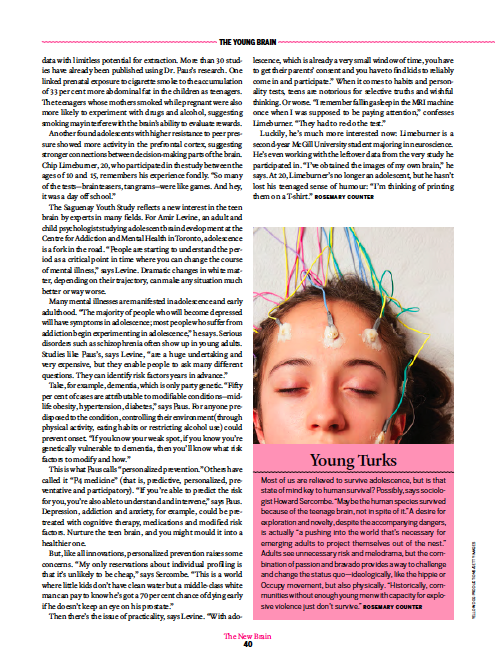