Colour therapy has been around for 5,000 years, since ancient Egyptians wore coloured sacred stones and Hindu healers linked the colour spectrum to the body’s seven vital chakras. The theory behind this type of therapy (also called chromotherapy, light therapy and colour healing) is that each colour’s unique wavelength has a corresponding vibration speed that works to harmonize the brain and body, easing symptoms from mood disorders to lethargy.

Some scientists believe our reactions to colours are ingrained by evolution for survival; others say it’s merely the result of ever-present powers of association (black may make you feel sad, for example, if it reminds you of funerals). Either way, colour therapy is practiced around the world. Says June McLeod, an international expert, author of Colours of the Soul and the U.K.’s leading colour consultant, “We use coloured lights pointed at specific parts of the body, colour visualizations, breathing, art therapy and colour silks to support wellbeing.” McLeod believes colour does transform lives—and studies may prove it.

Seeing Red: If this colour reminds you instantly of love and lust, thank your animal instincts. Much as a baboon’s red bottom becomes redder to encourage mating in the animal kingdom, a 2010 study in the European Journal of Social Psychology reported that men rated a “moderately attractive” woman more attractive if she happened to be wearing a red top. Ditto for women—another study found 288 female undergrads viewed men in red as more powerful (and therefore more sexually desirable). And when anthropologists at England’s University of Durham studied the 2004 Summer Olympics in Athens, Greece, they found that when sporting opponents were equally matched in fitness and skill, whoever was wearing the red jersey was more likely to win the event.

The flip side of this is that red can have negative effects. “Red releases adrenalin into the bloodstream,” according to McLeod, which isn’t always good: In 2007, researchers at the University of Rochester and the University of Munich found people shown red prior to writing IQ tests performed worse. The researchers hypothesized that red is “associated with the danger of failure in achievement contexts” and therefore causes anxiety.

Feeling Blue: Despite any gloomy connotations, research has long shown that when it comes to personal colour preference, blue is the clear international winner. (It’s favoured even in China, where red symbolizes luck and fortune.) There’s no surprise there—blue has an impressive reputation for producing feelings of relaxation and calmness, happiness and comfort, say researchers at the University of Georgia in their 2004 study Relationship Between Color and Emotion.

“Blue is restful and can give us feelings of peace and serenity,” says McLeod, claiming the colour can help balance the thyroid and lower blood pressure. Even governments have noticed blue’s calming effect: In 2000, after blue street lighting was introduced in Glasgow, Scotland, to improve the look of neighbourhoods, the number of crimes decreased. In 2005 when blue lights were introduced in areas of Nara, Japan, crime in the blue-illuminated neighbourhoods went down nine percent.

Who knows? Switching to a blue plate may even help you lose weight: Because the colour is rare in nature and often signifies something poisonous, blue is thought to be a natural appetite suppressant.

Not-so-Mellow Yellow: In a 2007 experiment in New York City dubbed the “cocktail party study,” researchers divided partygoers into red, blue or yellow rooms. Guests in the yellow room ate—get ready for this—twice as much as the others. As well as stimulating appetite, yellow also stimulates the mind and intellect, making it a good pick for offices and anywhere you do homework or study, says McLeod. A 2010 study in the journal BMC Medical Research Methodology found that yellow was the colour most often associated with a normal mood, and grey with an anxious or depressed mood. Add a dash of green, however, and you’ve got the colour a University of Georgia study found evoked the least positive responses in students: yellow-green was associated with vomit and disgust.

The Green Light: Even though blue is generally considered a favourite, the University of Georgia study found it was green that scored the highest levels of positive feelings. Why? “Because it reminds people of nature,” say researchers. McLeod agrees: “When you feel the need for calm, use green for good health, peace, space and harmony.” If you take on a greenish pallor, however, expect women to notice first. In 2007, researchers at Newcastle University in the U.K. found that women were better able to discern green because of a “robust sex difference in the red-green axis of human vision.” They suspect that women, as caregivers, may have evolved a particular sensitivity to changes in skin colours to detect illness in their offspring. 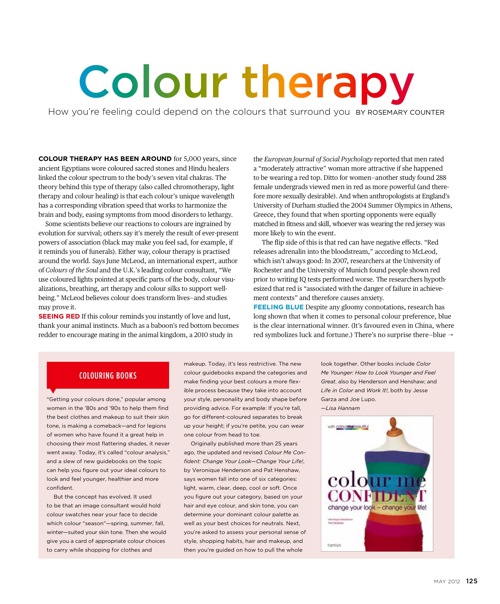 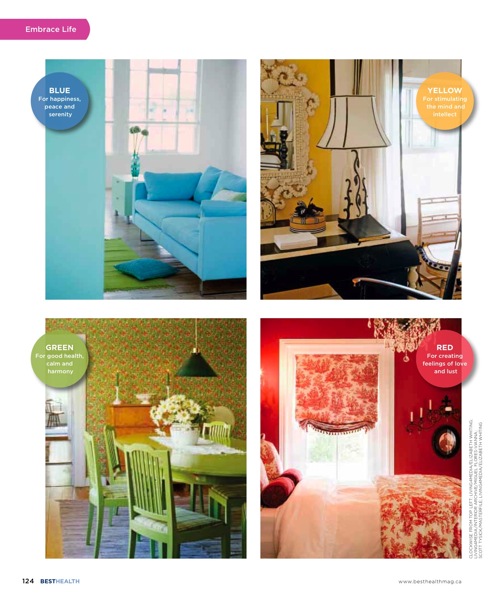 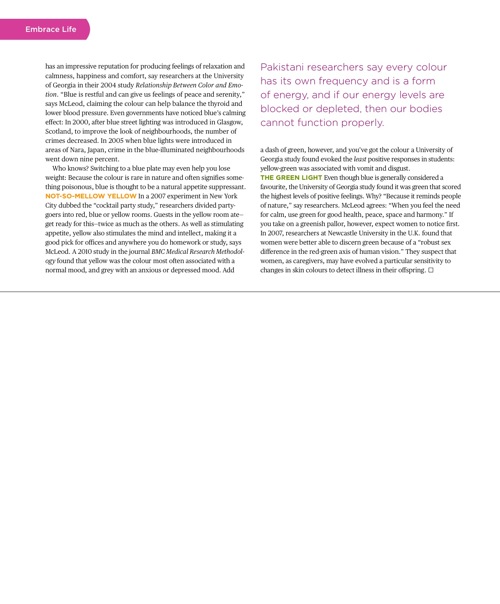