Since we were largely housebound with our televisions this year, the Emmy race feels especially thrilling leading up to the Sept. 19 awards – particularly since the women are outshining the men. Leading the charge for Best Actress is Kate Winslet as a Philly-accented, small- town detective in HBO’s Mare of Easttown, a twisty whodunit about the maybe-murders of three teenage girls. Dark and bleak, perhaps, but Jean Smart’s turn as Mare’s wise-cracking, opinionated – but ultimately loving and supportive – mother, warms the crime drama into unforeseen dramatic territory and makes her a serious candidate for Best Supporting Actress.

This isn’t Smart’s only shot at an Emmy this year: After three decades perfecting supporting roles on everything from Designing Women to Frasier, she moves into the leading-lady limelight in HBO’s Hacks. Smart shines as Deborah Vance, a 70-something, old- school stand-up comedian in Vegas (“Eat your heart out, Celine!” she wisecracks), mentoring Ava, an entitled millennial comedy writer who was cancelled by Hollywood for an off-colour joke. On Rotten Tomatoes, critics love Hacks 100 per cent.

Hacks and Easttown aside, the Best Actress competition is nothing short of fierce, with Anya Taylor-Joy as an orphaned chess prodigy in The Queen’s Gambit; Nicole Kidman perfecting her suspicious- wife face alongside ever-suspicious Hugh Grant in The Undoing; and Kaley Cuoco, rebounding from The Big Bang Theory as an alcoholic stewardess who wakes up next to a dead one-night stand in The Flight Attendant. Netflix’s critically acclaimed sensation The Crown, meanwhile, could easily take both top actress awards, thanks to Olivia Colman’s stoic Queen and Emma Corrin as the monarch’s emotional foil, Princess Diana, a notoriously difficult role to play. Where so many have tried and failed, Corrin’s portrayal of the princess is close to uncanny, thanks, no doubt, to the script from acclaimed playwright Peter Morgan.

Looking to turn your brain down with something a little less literary? Do try Bridgerton, Shonda Rhimes’ smutty historical romance that smashed records to become the surprise hit of the year. It probably won’t bank any Emmys, but as far as binge-watching goes, you really can’t do much better. 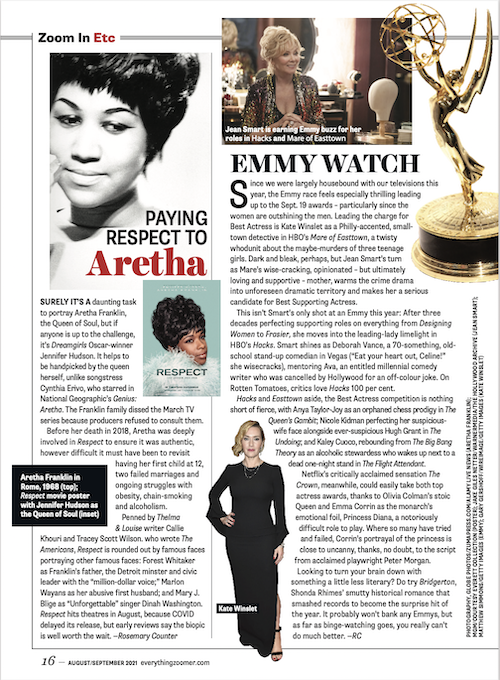