Every step you take, I’ll be avoiding you

The fitness-tracker ethos has created a new social media villain: the Fitbit bore

Laura Falsetto is des- perately trying to convince her boyfriend to hop on the fitness-tracking bandwagon. The 28-year-old resident of Surrey, B.C., got her Fitbit—the fitness-tracking device that logs your steps, flights of stairs, and even sleep patterns—last Christmas, and has since become an unapologetic fan. “I love my Fitbit, maybe too much,” she says, power-walking through this phone interview. “I didn’t know I was this competitive, but as soon as there was a competition, whether with family or friends, I just had to outstep them.”

But her boyfriend isn’t interested, in the Fitbit itself or in Falsetto’s daily report. “I suffer through it, because I’m a nice guy, but I don’t want to hear it all the time,” says Kevin Mark, 26. When his parents bought him one, Mark re-gifted it. Since he doesn’t count his own steps, he cares even less about others’. “There’s nothing worse than signing into social media to a pile of updates about how far people walked. I really don’t care.”

Falsetto and Mark have reached a familiar impasse: the mounting tension between Fitbit fanatics and their eye-rolling peers. Within hours of activating a Fitbit, a user gets her first of many congratulatory emails. “Nice! You’ve climbed 10 floors!” it reads, and prompts a social media share with a prewritten tweet that’s already been shared by thousands of users: “I climbed 10 floors today and got the Happy Hill badge with Fitbit!”

It’s the Fitbit way, and it may have led to the proliferation of a new social media villain: the Fitbit bore. A U.K. survey found “fitness boasters” were the most irksome of social media users—worse than food-sharers, event spammers and proud parents. Fitbit users know they walk a fine line. “I share my badges sometimes, but I don’t post my daily numbers,” says Danielle Donders, a Fitbit user in Ottawa. “I admit that’s a bit obnoxious.”

The trouble is, the fitness overshare isn’t entirely without merit. Just as the Journal of the American Medical Association published the discouraging finding that 42 per cent of people get bored and quit using fitness trackers within six months, Fitbit countered with its own numbers: Making even one Fitbit friend makes a user 27 per cent more active. Enrolling in a Fitbit challenge has average users automatically walking an extra mile. Participating in a competition with co-workers increases daily exercise by 31 per cent. The more interactive users are, it seems, the more calories they burn.

Keeping up with keeners isn’t easy, admits Krista Pawley, a 41-year-old mother in Toronto. Pawley’s no slouch; she participates in daily challenges and has been known to jog on the spot to get her last-chance numbers up, but she still finds the competition is heated. “There are too many runners in my feed,” she says, “and some generational divides, too. Anyone who goes to dance parties wipes everyone else off the map. No parent can dance until 4 a.m.” She’s been tempted to slip her Fitbit into her kid’s pocket, but has resisted so far.

Constant comparison can be a motivator, says psychologist Nathalie Nahai, but it can backfire. “It’s about healthy behaviour versus non-healthy behaviour—being able to post updates without alienating my friends by being narcissistic or self-aggrandizing,” says Nahai, author of Webs of Influence: The Psychology of Online Persuasion. Constant oversharing and validation-seeking behaviour becomes an inescapable Catch-22. “The more effort you put in, the more disappointed you’ll be if there’s no payoff,” says Nahai.

Then there’s the old adage: If you can’t beat ’em, join ’em. When Calgary-based writer Lisa Kadane’s Fitbit-fanatic husband bought her one, she embraced it. With the goal of climbing Mount Kilimanjaro in mind, Kadane dove in, and soon found herself going up and down stairs while brushing her teeth.

“It’s so annoying—until you get one,” says Kadane, who lost her Fitbit on a hike and has yet to get a new one (though she did make the Kilimanjaro goal). Her husband now has a new model with new features. “My goal today is 508 flights,” reads a recent text message to his wife. Kadane tries her best to be supportive. “Good luck!” she writes, adding, “Don’t croak.” 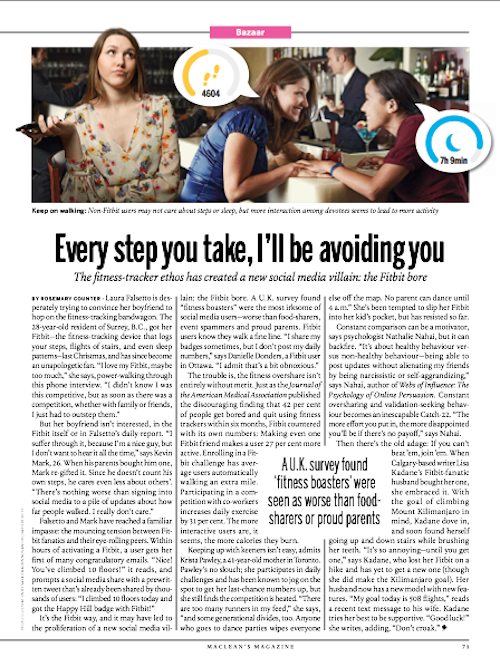