An insatiable appetite for everything in the fridge, hiding you eating habits and out-of-control weight fluctuations are hallmarks of a serious problem with food

It was the first date in nearly a decade for 30-year-old Michelle*. At more than 300 pounds, she was excited that someone found her attractive. But the guy turned out to be a complete jerk, and the night a total disaster. “Halfway through dinner, he started asking about my friend,” she recalls. But it was what he said next that is burned into her memory. “He said, ‘I saw a picture of you when you were thin and beautiful. What happened?’” Michelle snuck out while he was in the bathroom and took a cab home, humiliated and devastated.

Soon afterwards, Michelle joined Overeaters Anonymous to make sense of a lifetime of food habits gone wrong: At the age of eight, she ate stolen food in her cottage bedroom as other children splashed outside; in her 20s, she’d order takeout from two places and pray they didn’t arrive at once.

But it was around age 27, when a private detective tracked down her biological family, also obese, that Michelle learned where her insatiable appetite came from. “I didn’t inherit the fat, because when I eat normally I weigh normally, but inherited something else,” she says. “The stop mechanism that lives inside of normal people doesn’t live inside of me.”

If Michelle’s thinking sounds familiar, it’s because it’s a classic description of addiction. If Michelle were guzzling vodka or gambling compulsively, doctors would call it a “disease” and offer specific support. If she were to confess all of the above to her doctor, though, she’d likely be diagnosed with binge eating disorder or compulsive overeating, but not an addiction.

Dr. Vera Tarman, author of Food Junkies: The Truth About Food Addiction, says, “Generally, the medical profession disregards this and says it’s doesn’t even exist.” Many doctors consider it a psychological compulsion rather than a physical addiction, she says. But recognizing it for what it is would go a long way to treating it, says Dr. Tarman, who has dealt with addiction from both sides as a recovering food addict herself, and as the medical director of Renascent, an addictions treatment centre in Toronto. “Binge eating disorder and addiction are fundamentally different, and treatment is fundamentally different,” says Dr. Tarman. In this case, labels matter in a big way.

Studies on food addiction, meanwhile, are as split as they are sensational: “Oreos May Be As Addictive As Cocaine” read a 2013 Time headline, after one study found that cookies activated significantly more neurons than cocaine or morphine in the pleasure centre of the brains of rats. Another study, reported in The American Journal of Clinical Nutrition, revealed that human brains behaved similarly when reward centres went into overdrive for high-sugar chocolate milk (compared to less sweet, calorically identical milkshakes).

On the other hand, newer research from an international team of scientists studying the neurobiology of eating behaviour, addiction and stress has not shown strong evidence for a chemical addiction to food. These researchers propose that “food addiction” is a misnomer and “eating addiction” is a better description of a behavioural compulsion to eat.

Still, anecdotal evidence to the contrary is convincing. In food recovery since 2004, Dr. Tarman believes her addiction to sugar and white flour is no different than others’ to crack cocaine. Chemically, the brain is performing the same balancing act: when it comes to dopamine, the feel-good hormone associated with anticipation that surges when you think of love or your favourite song or cheeseburgers, and serotonin, the neurochemical that makes you calm, satisfied and content enough to put down your fork. Excess dopamine or insufficient serotonin causes insatiable cravings – wants are too great and rewards are too few.

And then there’s the story of Mike MacKinnon, a 48-year-old, health-conscious, personal trainer from Mississauga, ON. “I’m a recovered alcoholic and addict in general, and I promise you my food addiction was way worse than anything else,” he says. “When I ingest wheat, flour or sugar, it creates this phenomenon of craving that I can’t stop.”

MacKinnon was “clean,” as he calls it, for one year and three months when he succumbed to a bite of sourdough bread at The Keg. He finished the bread, ordered another basket and ate that, too, plus three desserts. “Then, at two in the morning, I snuck out of bed and went to 7-Eleven for junk food. At the end, my typical binges included a 12-slice pizza, a bag of cookies and eight chocolate bars.” Anyone who doesn’t believe in food addiction, he says, “just hasn’t been addicted to food or they’re in denial about their own food addiction.”

Without a term for diagnosis, experts can only speculate the scope of this problem. We can look to obesity rates (about 6.3 million Canadians, based on 2012 data), but that doesn’t provide an accurate picture since not all obese people are food addicts, nor are all addicts obese. (Like MacKinnon, some go through a continuous cycle of gaining and losing weight.) Dr. Tarman estimates that “five percent of the general population are food addicts, and 30 to 40 percent of the obese population are.” As with all eating disorders, women are disproportionately affected. “Men tend to go for alcohol, women for food,” says Dr. Tarman. Already largely the domain of women, food is a very acceptable addiction. It’s also legal, affordable, available and conveniently delivered to your doorstep.

But we all overeat sometimes – Thanksgiving, anyone? – and most of us eat emotionally, too. Should we be worried we’re on the path to addiction?

“For me, food addiction is when you start to display addictive behaviours,” says Dr. Tarman. “If you become secretive about food, if you hide food for later, if you eat differently in public than you do in private. It’s a problem when it starts to control your life.”

For Canadians looking for more information or guidance, Dr. Tarman recommends reading up on the issue, investigating a local chapter of Overeaters Anonymous, or seeking a private counsellor or reputable online community such as GreySheeters.

“We have more information about this than we ever have,” says Martha Peirce, a private counsellor and therapist in Hagersville, ON, who specializes in food addiction. And Peirce believes healthcare practitioners are slowly coming around, pointing to the 1st Annual Food Addic- tion Conference, sponsored by the University of Massachusetts Medical School, where substance abuse treatment professionals, mental health counsellors, physicians and psychologists met to learn the latest science on food addiction, discussing proper diagnosis and treatment options for patients. With new learning and awareness comes solutions and, more importantly, support for tough life choices such as abstinence, which is key to kicking any addiction. This is the path that both Dr. Tarman and Mike MacKinnon find themselves on, practising an abstinence model by avoiding all sugar, wheat and trigger foods.

It’s Michelle’s journey, too. Now down 160 pounds, Michelle is committed to a strict 1,800-calorie-a-day diet. But every day is a struggle. Unlike other addictions, such as alcohol or cigarettes, you can’t walk away from food completely. Your body requires it, every few hours of every day. That means you’re always dancing with the devil, always being tempted. If there were more research and recognition of food addiction, there could be more support for those addicts who risk relapse at every breakfast, lunch and dinner. 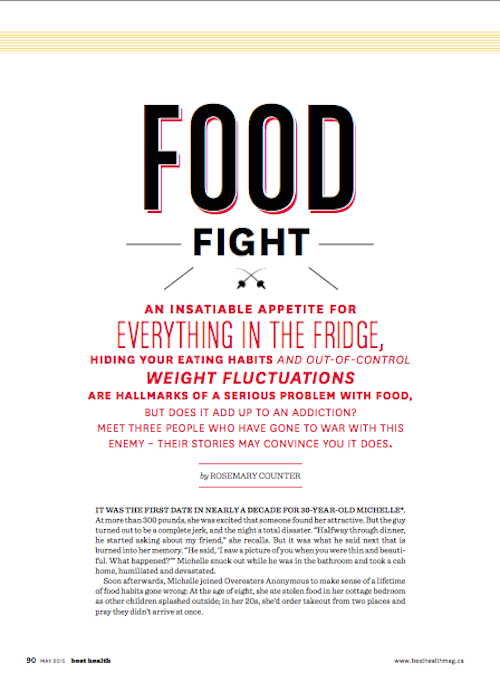 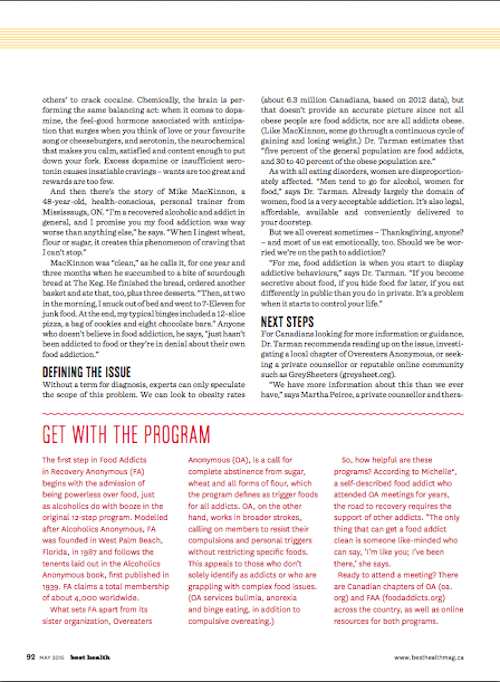 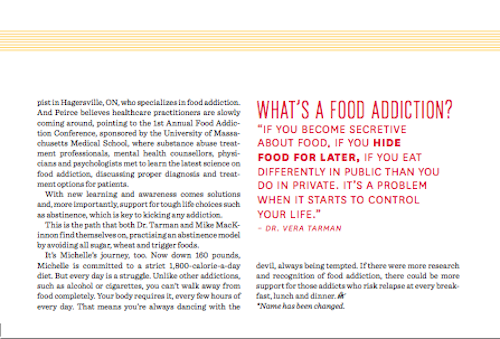