To make an omelette, you have to break a few eggs

It was a scene like the denouement of a young-adult novel: as the school day ended, a University of Manitoba class of 50 environmental design students—most of them the sensitive, impassioned age of 20— were distracted as usual by happenings outside.

Most days, the diversion was a pair of nesting Canada geese who had laid eggs beside the basement studio window. “The students had been watching for weeks and taking photos,” says instructor Maria Mavridis of the animals she calls unofficial “studio mascots.” But on that day a few weeks ago, two strange men strode past. “Each had a baseball bat in one hand and an umbrella in the other. They were on a mission to destroy.”

And destroy they did—or, more euphemistically, they “culled” the eggs by smashing them—while the horrified students banged on the window and begged the men to stop. They did not, and Mavridis’s room of “shocked, appalled and slightly traumatized” class members were left only with questions: what were the men doing, and why? Was this even allowed?

Not only was it allowed, it turned out the university had actually commissioned and paid for the service. A surfeit of geese on campus had led to “two incidents, at least, that raised concerns,” says John Danakas, U of M public affairs director, the unfortunate official who had to explain this optics nightmare.

The first incident involved a staffer who tripped while fleeing an aggressive goose and injured a wrist; the second arose from parental complaints of nests being too close to the university’s child care centre. “Especially with regard to the children at the facility, out of an abundance of caution, the university thought it best to relocate the nests,” says Danakas. They obtained a permit from the federal wildlife service and outsourced the job to an unnamed private company.

Here, says Danakas, some kind of miscommunication took place. Rather than performing the nicer-sounding “relocation” that U of M had ordered, he says, company workers picked up their bats and set about “culling” (carrying the umbrellas to use as shields against angry parent geese, presumably). Their method, Danakas stresses, “was not one the university is comfortable with and didn’t suit the university community.”

But it was too late. The sensational thugs-with-bats narrative spread quickly across campus. “I wasn’t in the classroom but I heard about it immediately,” says Delica Leboe-McGowan, a 17-year-old freshman, animal activist and school-newspaper contributor. “I imagined just how the parent geese must have felt and I knew I had to do something.”

“We, the undersigned, insist on the cessation of all culling of Canada goose eggs,” reads Leboe-McGowan’s Change.org petition, which already has nearly 1,000 signatures. Since the university had already vowed to stop culling, Leboe-McGowan broadened her mission and called for the end of “all other harmful (physical, psychological, or otherwise) methods being used to manage [the goose] population.”

How exactly to manage the number of geese on campus, or even whether it needs managing, depends on whom you ask. Considered extirpated in many parts of southern Canada just half a century ago, the goose population is now considered stable and increasing. “Numbers have been going up for 60 years or so, especially here on the Prairies,” says Jim Leafloor, population management biologist with the Canadian Wildlife Service. They’ve not yet been designated overabundant, says Leafloor, so “whether they’re overpopulated or not is a matter of opinion.”

Some, like Leboe-McGowan, see an iconic bird adding nature and beauty to campus. Others see aggression, loud squawking and feces on lawns. Competition for space is fierce, observes Leafloor, since the geese “like just what we like—green space, grass, fresh water,” making golf courses, parks, cemeteries and university campuses ideal habitats.

Numbers fluctuate, but about 50,000 (migratory and resident) geese called Winnipeg home last year. Their numbers are indeed up, but so are the survey areas, notes Winnipeg city naturalist Rodney Penner. A population problem at U of M, he explains, could be area-specific: “We do see some spots increasing year to year, so it’s possible that the university has more geese than before. It could be reality, or it could be perception.” Complicating matters, says Leafloor, is that problems are also bird-specific. “For some, thousands of geese on a property is no issue,” he says. “For others, a single aggressive pair is enough to cause concern.”

Population control is therefore conducted case by case, monitored by the wildlife service, and could involve removing, relocating and, in some cases, culling eggs. In this particular “high-profile situation,” says Leafloor, “smashing eggs was probably not the right choice. It tends to invoke a visceral response” (his 23-year-old daughter, a U of M student, is among those having a passionate one).

The university agrees wholeheartedly and, with the help of Leafloor and other wildlife officials, is working on a comprehensive plan focusing on, in Danakas’s words, “education and awareness as the best way to co-exist with the geese.” Namely: keep a respectful distance (especially from a nesting mother) and back away slowly at any display of aggression. For anyone still concerned, know that goose attacks remain so rare that they’re not even monitored. 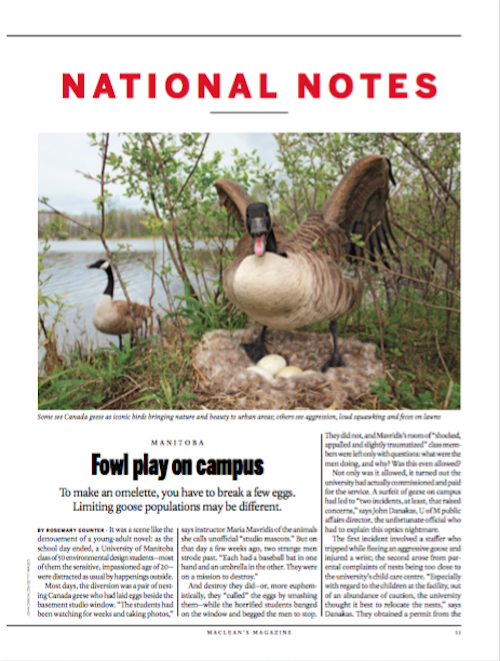 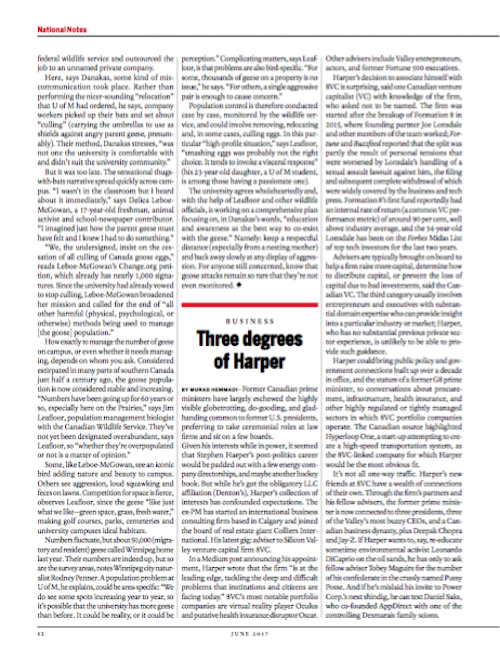