From Cupcake Craze to Puffy Phase

The lowly marshmallow becomes a vehicle for bacon and peanut butter.

When Mai Ha went camping a few years ago, the Torontonian was deeply disappointed by the marshmallows in her s’mores. “They were flavourless, spongy, and full of preservatives,” she says. Inspired by Subway’s sandwich artists, Ha transformed herself into a “mallow artist” and launched an online business called I Love Puffy Love in 2010. She believes handmade gourmet marshmallows are the new must-have trendy treat. “First there was the cupcake craze, then it was macaroons, and marshmallows are next.”

Since a New York food blogger suggested the same in January, foodies have fiercely debated whether marshmallows can live up to the hype. To be fair, this generation is more familiar with the Kraft Jet-Puffed kind.

“Marshmallows are the quintessential store-bought thing,” says Shauna Sever, author of the new cookbook Marshmallow Madness!: Dozens of Puffalicious Recipes, but it wasn’t always that way. Sever traces the marshmallow’s birth back to ancient Egypt—where the gelatinous juice of the marsh mallow root made an early cough drop—through to a European makeover many centuries later. “French confectioners added sugar and egg whites, also known as meringue,” she says. In the 1940s, American inventors turned the delicacy into the mass-produced commercial variety we know today.

“Now we’ve come to this interesting time in the culinary world where people are making things from scratch that they’d typically just buy,” says Sever. That said, if making marshmallows never occurred to you, you’re not alone: “Most people don’t even know what’s in a marshmallow.”

With just a handful of ingredients and no baking required, marshmallows are deliciously simplistic—after some practice. “It’s finicky and kind of messy, but quite easy once you get the hang of it,” says Tina Bacon, a Mission, B.C., pastry instructor and founder of marshmallow-making company The Pink Spatula. She begins with corn syrup, sugar, water and a pinch of salt over medium heat. When it reaches the right temperature, she adds the bubbly sugar mixture to water and gelatin (used today in place of mallow root) in the bowl of an electric mixer. It’s whipped into a “beautiful ﬂuffy confection” and spread on a cookie sheet to set overnight.

The fun part, however, is the endless variety of textures and ﬂavours. Bacon’s summer collection includes berry blush, vanilla bean, peanut butter ripple and toasted coconut. Inspired by the seasons, her past fall collections served holiday spice, Irish cream, and peppermint. Sever’s book includes recipes for maple bacon, pineapple rosemary and sea salt caramel. “I’m trying to get people to think of the marshmallow as a blank canvas,” Sever says.

Kimberley’s Kitchen in Telkwa, B.C., launched 18 months ago and specializes in gourmet marshmallows and old-fashioned candy made with fair-trade and organic ingredients. While it wasn’t her original intention, weddings soon fell into Kimberley Mulla’s lap. “People started requesting custom creations to match their colour scheme,” she says, recalling skewered chocolate and mint marshmallow flowers she made for one brown and green wedding. Mulla is booked for the 2012 season and is taking orders for 2013.

Comparing last season’s cupcake with today’s marshmallow, it’s easy to see the appeal. Handmade gourmet marshmallows retail at about a dollar a pop; cupcakes are at least $3. Two berry blush marshmallows from Pink Spatula contain 130 calories and no fat; one chocolate cupcake with icing can hide almost 700 calories and 30 g of fat. “Of course they’re not a health food,” Sever says, “but as far as treats go, they’re really not bad.”

But the airy squares offer more than a hit of sugar, says Mulla. “There’s a real trend toward nostalgia and comfort food. When I eat a marshmallow, I’m reminded of a time when things were simpler.” Bacon agrees: “I see a lot of seniors who say, ‘Omigosh, my mom used to make coconut marshmallows!’ It reminds people of their childhood, but with a more refined palate.” 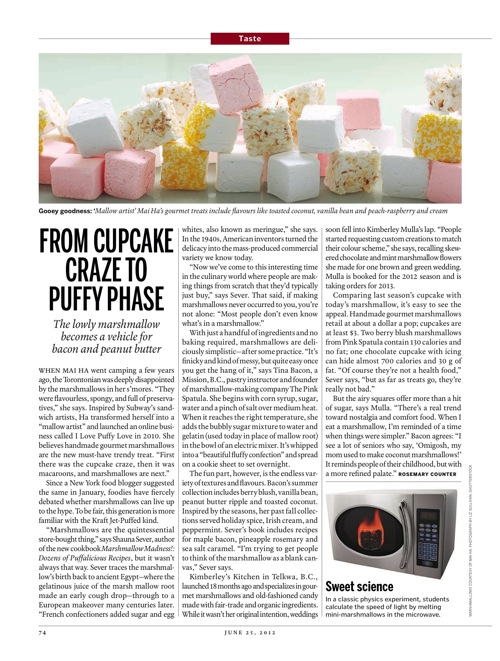