Plagued by insomnia? Spending the night being observed in a sleep lab can get to the root of the problem.

Imagine this: You’re in a sterile clinical laboratory, surrounded by strangers. One of them leads you into a little room and asks you to lie down while he applies electrodes to your head and body. “Will you be able to read my dreams?” you ask, only half-joking. He smiles at your naïveté as he heads out the door. “Just try to sleep,” he says, clicking off the light.

This isn’t a post-Inception nightmare. This is a true story—two of them, actually—of what it’s really like to spend the night in one of the more than 100 sleep labs in Canada. I’ll tell you how it went for me, and the story of my friend Nikki’s experience.

A 29-year-old television production coordinator, Nikki is an insomniac who dreads sleep: “I lie there—waiting, waiting, waiting—watching the clock,” she says. Then there’s me, a 28-year-old freelance writer on a distinctly freelance sleep schedule: needing lots of sleep for some reason, and sometimes even afternoon naps, but unexplained headaches and fatigue nonetheless.

Of the five million Canadians who have problems sleeping, there are just two kinds of people who visit the sleep lab, says Dr. Charles Samuels, medical director at Calgary’s Centre for Sleep and Human Performance. “There are desperate people who come in begging to get into the lab,” he says, “and then there are the people in the other group, who don’t know anything about sleep labs and are completely taken aback [by the whole idea].” Nikki, who hasn’t felt rested since high school, is the first kind. I, so nervous that I reschedule twice, fall into the second.

Most sleep labs have limited access and long waiting lists because there are only so many of them in each city and province. Some provinces use a blended model of hospital labs and community sleep centres, explains Samuels. The fee for a test in a hospital setting is covered by the government. A night at a community sleep centre may or may not be funded by the government and/or your private insurance plan—which means you may have to pay something for the service, but can expect excellent support and a comfy room, more like a hotel.

Either way, the procedure remains the same. Following referral from our doctors, both Nikki (at a centre) and I (at a hospital) arrive around 7 p.m. With reading materials in hand (people bring in everything from snacks to their own pillow), each of us is taken immediately to similarly small rooms with single beds and given a long survey to complete: Do you ever fall asleep while reading? Do you snore? Has anything traumatic happened to you recently? What adjectives would you use to describe yourself? What did you do today?

We had followed the lab prepping instructions, so on the night before arrival we both ate and slept as we normally would, and didn’t do anything—like run a marathon, for example—that would have exhausted us beyond normal levels. “The goal is to observe a typical night’s sleep,” says Thom Russell, a polysomnographic technologist at Royal Jubilee Hospital in Victoria. It’s Russell’s job to produce a viable polysomnogram, a test that captures your brain waves. Six hours of sleep—which even poor or light sleepers usually get during their visit—gives a good reading, and one night in the lab is almost always enough.

And then comes the part nightmares are made of: A clinician, or technologist, attaches electrodes with adhesive (to hold your sensors in place if you roll around) all over your body. “There are usually 10 sensors on your head, two on each leg, two on your chest to see the heart rate, two sensors in your nose to monitor airflow, a band around your chest and one around your abdomen, an oximeter [to measure blood oxygen] on your finger and a microphone on your neck for sound,” says Russell. Lightsleeper Nikki found her twin bed and all the sensors beyond uncomfortable; I felt just slightly awkward, but did enjoy my crisp white sheets.

Once you’re plugged into the monitoring machines like a robot, the camera is turned on, and at 10 p.m. your light is turned off. Since the goal is to measure your natural sleep onset, you can forget any regular routine: Reading yourself to sleep isn’t allowed, nor is a glass and a half of red wine, or the Late Show with David Letterman. Instead, Nikki hears an official-sounding voice over the P.A. ordering her to “Go to sleep!” At least my technician wishes me good night (yeah, right).

“The reality is, it doesn’t matter if you get a great sleep” at the lab, says Samuels. For me, it’s a very foreign idea to sleep anywhere but home, and even more so to be watched and monitored. It’s best that you abandon both the fantasy you’ll sleep like a baby and the worry you won’t catch any zzzs at all. As for your mood, it can plummet quickly in a tiny room all alone. “I got really beaten down and depressed,” says Nikki. “I almost felt like I was in a mental institution in the 1920s.” At my lab, I’m not quite so bummed, but am very bored. It takes me a full hour and a half, but like most patients at the lab, I do eventually sleep.

And as soon as I do, the experts can get to work. Even though the most common complaint that brings people to the sleep lab is insomnia, Russell says the most common diagnosis is a breathing disorder. Doctors are also on the lookout for restless leg syndrome, bruxism (teeth grinding), narcolepsy and worse: “Just yesterday I saw a woman who had fallen down an elevator shaft while sleepwalking,” says Samuels. Then again, sometimes he finds absolutely nothing: “We’re also ruling out sleep disorders, and there’s value there, too.”

Nikki and I are lucky enough not to sleepwalk, but when the results land back at our family doctors, we are not given a clean bill of health, either. With eight measurable sleep disturbances during the night (meaning you wake up for less than three seconds and don’t remember the arousal the next day), I’m diagnosed with mild sleep apnea—abnormal pauses in breathing caused by my over-relaxed airway. I’ll try to manage that with lifestyle modifications, but may also need a CPAP (continuous positive airway pressure) machine, which helps prevent upper airway collapse while you sleep. And I may need a dental appliance to help me breathe properly at night.

Nikki beats me hands-down with an average of 14 sleep disturbances and seven full awakenings per hour during her night in the lab; she’s prescribed a sleep aid. More importantly, she’s gained some reassurance for a decade-old complaint. “I now have validation that I’m not making it all up.”

Much like going to the dentist, both Nikki and I are glad—in retrospect—to have gone to the lab, despite any unpleasantness. “Time and time again, the patient wakes up and leaves saying it wasn’t as bad as they thought it would be,” says Russell. The 6 a.m. wake-up call wasn’t fun, but in 10 minutes I’m unplugged, dressed and in a taxi taking me back to my own bed—for which I have a new appreciation. 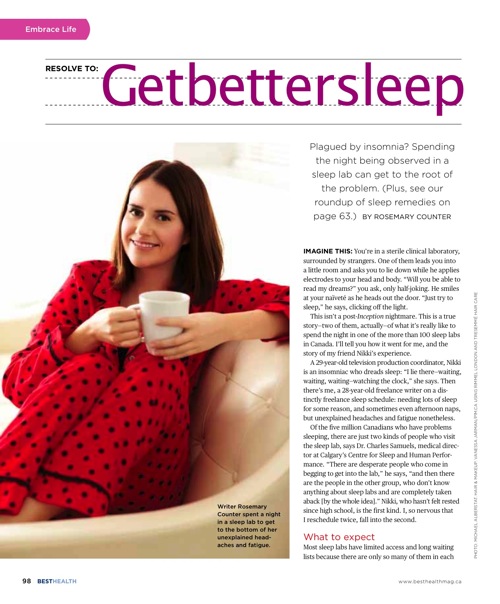 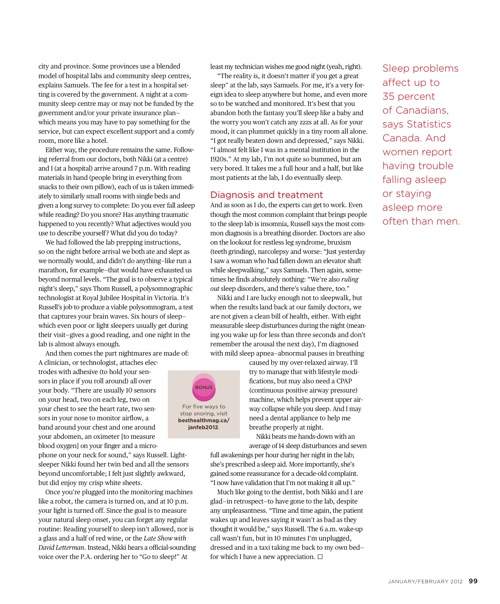