Getting slap-happy with labels

From retirement homes to daycare, people are putting their names out there

Like most moms, Donna Ng is a slave to labels—and not the designer kind. The 32-year-old stay-at-home mom from Ajax, Ont., once sent her seven-year-old son to school with his labelled lunch bag, only to have it come back with a request to label the plastic containers inside. “Like, really? Not everything needs a label. It’s just not worth the irritation for me.”

For moms like Ng, excessive labelling is a grind. “My kid knows what’s his and what’s not,” she says. “I get it: schools are not responsible for lost or stolen stuff.”

The push to label is everywhere, from retirement homes to daycare, schools to summer camps. At Camp Summit in B.C.’s Squamish Valley, they “really, really encourage” them. “It’s the difference between going home with all your stuff and not,” says associate director Vanessa Marcotte.

One year, a nine-year-old left his unlabelled clothes at camp and went home with a bag of rocks. “He wanted to take camp home with him,” she says. Adorable, unless you’re his parents. They had to come back, sift through piles of dirty clothing, and bring it all home again. It’s a similarly gross gig for whomever sorts through the lost and found. From the inevitable heap of ownerless clothing, the camp tosses the underwear, keeps anything useful, and donates the rest.

To avoid this fate, labelling is catching on, especially because children have more expensive stuff now. “If the kid is dressed in MEC and carrying an iPod, parents want those things back,” says Marcotte.

Slap a label on it, and this could happen to you: A few years ago, in the bush near Chapleau, Ont., some campers found a sweater. This would usually be the end of a boring non-story. But it had a label in it, and the label was from Mabel’s Labels, a small Hamilton business with a good memory.

“By the name and style of the label, we were able to track down the owner and say, ‘Guess what? We’ve found your sweater,’” says Julie Cole, one of four Mabel’s Labels founders. Needless to say, the owner was impressed. So was Wal-Mart, where Mabel’s Labels landed on shelves this month.

“We were going to play dates and the park and daycare, afterwards asking, ‘Is this your cup? Is that my container? Whose lid is that?’” says Cole, a former lawyer with six kids between three and 12. With three other young moms, all alumni from the University of Waterloo, she formed Mabel’s Labels 10 years ago. “People were still labelling then,” explains Cole, “but with masking tape and permanent marker—very unattractive and not very effective.” Mabel’s Labels now sells a dozen varieties of pre-ordered customized dishwasher- and microwave-safe labels; it also has 40 employees in Hamilton and millions of dollars in sales.

Similar companies, including Lovable Labels, based in Oakville, Ont., serve the same busy-mom market. “Gone are the days when moms sew their kid’s name in a baseball cap,” says founder Laura Porreca, who has seen more and more rivals enter the market since her 2003 launch. But more daycares, schools and camps are insisting on labels, and a boom in the seniors’ population beckons. “This is another niche market, but not something we have tapped into yet,” says Porreca. “It is something we are considering for the future.”

Mabel’s Labels has a new product for not-so-supermoms without the foresight to order online in advance. “There are people who call in an absolute panic, ‘My kid is going to camp tomorrow.’” Write Away! labels allow you to write a name on the sticker with marker and cover it with a clear, waterproof overlay. It was this product that caught the eye of Wal-Mart execs. The 50 million Mabel’s Labels sold in 97 countries helped, not to mention free press on suitcases of the celebrity kids of Gwyneth Paltrow and Rachel Weisz.

The off-the-shelves labels cost $10.47 for a package of 30, and Cole guarantees they’re worth every penny. “Your kids’ pants will be long outgrown, with holes in the knees, and as you’re throwing the item in the garbage or donating them to charity, the label will still be going strong.” 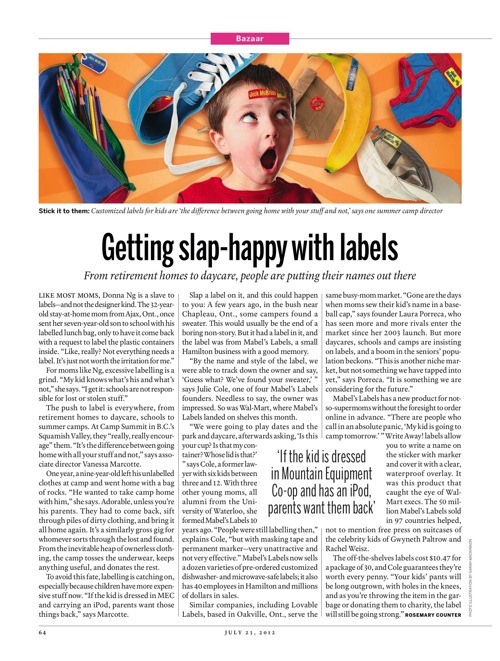