Get Your Game On

Is “techercise” the next-gen solution for shedding layers by spring?

My 30-minute spin on the elliptical—which, admittedly, is only happening if Oprah is on—is getting blander than bland; I need a change of scene. Enter “exergaming”—the inevitable multi-billion dollar fusion of exercise and video games—which has a slew of active games that claim to slim and tone your body without you ever leaving your living room. I’m intrigued, but, as a non-gamer whose knowledge is limited to hazy memories of Super Mario Bros., I’m also skeptical.

Though exergaming may seem like gaming’s newest thing, it’s not: Nintendo’s Power Pad in the late ’80s and Dance Dance Revolution a decade later were both classics that got gamers off the couch. “Today’s games have more sophisticated equipment, but there’s a mindset change more than anything else,” says Dr. Larry Katz, co-director of the Canadian Exergaming Research Centre in Calgary. With so much time spent sedentary behind a computer or TV screen, he says we need exercise wherever we can get it, and exergaming may be a viable alternative. Studies show that children are six times more likely to exercise if it comes in game form, men are almost twice as likely to stick to an e-regimen, and even senior citizens showed reduced depression rates after exergaming. But the jury is still out on the holy grail of gaming demographics: young women.

So, whether my boyfriend likes it or not, I’ll be hijacking his Xbox 360 three times a week and begrudgingly moving the furniture—I need a yoga mat’s worth of space two metres from the TV—to play Your Shape Fitness Evolved on Kinect. Weights are good if you have them (I’ll be using cans of peaches), and there’s no need for stylish Lululemons to impress intimidating gym bunnies. “You do it at home, on your own time and in your underwear if you want—or even naked,” says Nicola Godin, one of the game designers. (A nice sentiment, ladies, but unless you want to see your naked self in a flying jog, wear a sports bra.)

Things start like a scene from Total Recall: A camera that’s hardly as cute as WALL•E scans me up and down, measuring my height and weight as I input my activity level and fitness goals (reduce stress, have more energy, improve my appearance). Though a hot male trainer would be much appreciated, instead I’m guided through my fitness test by a croptopped spiky-haired gal in Converse shoes. Like a real trainer, she’s mildly annoying but encouraging enough (“Get a nice low lunge!”) as she leads me through six sets of three sculpting exercises, including squats, presses and pliés. There’s a very convenient “calories burned” counter in the corner, and it’s all punctuated with inspirational workout tidbits like “People who exercise are more likely to stick to their diets.” The more workouts completed, the more levels I unlock—as well as downloadable extras available online.

Confession time: Maybe it was the reward brie—or perhaps the ringing phone and gossip sites had me too distracted at home—but after about a month on the “Skinny Jeans Workout,” my thighs measure only half an inch skinnier. Because as great as this technology is, admits Godin, “If you’re not motivated, it won’t work.” As such, exergaming has hardly given me a bikini body, but I have freed myself from my fitness funk. I’ve tried tai chi, a Zen energy class and even Bollywood belly dancing—none of which I’d ever dare in public due to the high risk of humiliation—and I haven’t been bored once. I’ve decided to keep exergaming in the rotation as part of an active lifestyle—once Oprah is in syndication, of course. 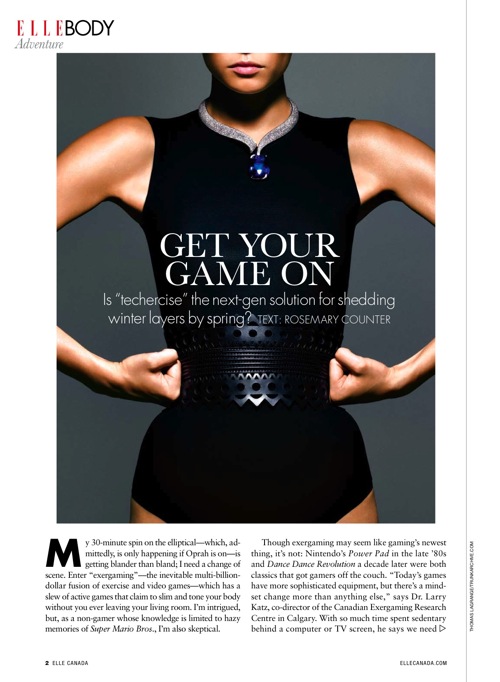 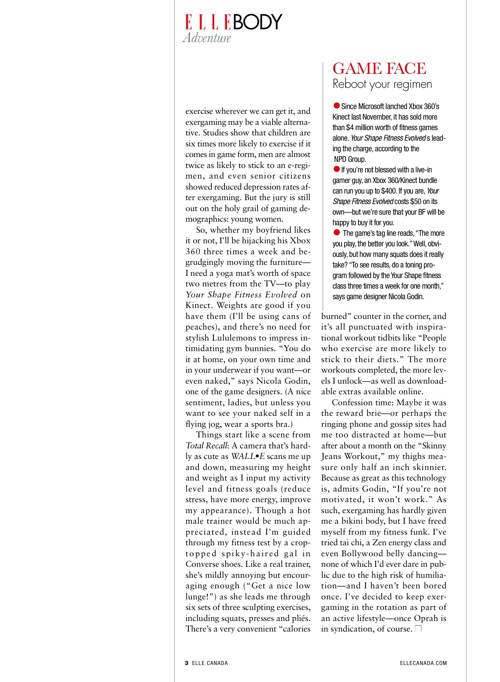