I have an ovarian cyst. Now what?

My feet were in stirrups, lady-parts on full display. The ultrasound technician was checking me out after a routine Pap smear had revealed I had an enlarged uterus. I watched the screen as she methodically measured a dark blob.

“What is it?” I asked, holding back nervous tears. She silently pointed to a paper sign on the wall. Questions to the technicians won’t be answered, it read. But when my tears began to flow freely, she reluctantly called a doctor into the room. “Relax,” the doctor said. “It’s just a cyst.”

Now I’d heard of cysts in the same way I’d heard of jock itch: probably common, definitely gross, but something I’d never had to worry about before. In reality, women are just as likely to have a cyst—a fluid-filled sac that can pop up just about anywhere in the body—as we are to have a pimple in our lifetimes. But unlike the honker that appeared on your nose on prom night, you will probably never even notice an ovarian cyst.

Technically, if you’re an ovulating woman, you have a cyst every month. A quick biology lesson: The egg is encased in a sac called a follicle, which should rupture to release the egg. But if the follicle misses the hormonal signal to do so, or if it reseals with fluid inside, you’ve got yourself a functional cyst. “They’re completely normal, benign, and can happen pretty much every month,” says Dr. Jessica Shepherd, an OB/GYN based in Louisville, Kentucky. Like fibroids, which are also unwanted growths (though fibroids are solid masses located in or around the uterus), ovarian cysts are usually painless and unnoticeable. They will often dissolve on their own within several days.

But what if they don’t? When my cousin Michelle was just 14, she woke up in “the most pain I’ve ever felt, ever.” Her father, convinced Michelle’s appendix had burst, took her to the emergency room, where an ultrasound—she thinks; she was too woozy to recall—found that she had many ovarian cysts, and one had burst. The pain from a burst cyst, say some unlucky women who have experienced it, can be akin to passing a kidney stone.

“There’s no rhyme or reason as to why they rupture,” says Shepherd. Michelle was promptly put on the birth control pill (standard in cases like hers), which suppresses ovulation to manage the formation and growth of new cysts. She is likely genetically inclined to develop cysts, and her immune system was also at play, but there’s no real “cause” to them. Pain meds can help with periodic soreness (which can feel like extra pressure or fullness in your uterus at different times during your cycle), as can a warm heating pad.

These symptoms and treatments are related only to functional cysts, which were not what I had. “It’s not that the other types of cysts are un-functional, they’re just not related to your menstrual cycle,” says Shepherd. She’s referring to the half-dozen other kinds of ovarian cysts, and countless differential diagnoses within them. These include cystadenomas, mucus-filled cysts that form on the outside of the ovary; endometriomas, known as “chocolate cysts” for the dark blood that fills them; and dermoid cysts, which aren’t the result of a failed pregnancy, but do originate from multiple layers of embryonic tissue and can have remnants of skin, hair and even teeth.

Ninety-five percent of cysts are benign, and as a 26-year-old woman with no family history of ovarian cancer, I had a relatively low risk of developing it—but the possibility was always on my mind. Not helping matters were my limited options: have surgery, or do nothing. “We try to wait it out and monitor a cyst before we do the surgery,” says Dr. Sony Singh, director of minimally invasive gynecology at The Ottawa Hospital. “But if they are more than four or five centimetres, getting bigger or causing problems, we may need to remove them surgically.” That made my decision easy: My cyst, nestled on my left ovary, was already a very impressive nine centimetres in diameter—the size of a regulation softball—and yet I had never felt a thing.

More than 21,000 ovarian cyst removals—called cystectomies—are performed across Canada each year. Many doctors still perform traditional surgery to remove cysts. But, says Singh: “almost all cases should be done laparoscopically”—that is, performed through small incisions with the aid of a tiny camera.

That’s what I had. After being put to sleep with a general anesthetic, my abdomen was inflated with carbon dioxide, making a tent of space for the doctors to work in. “We very delicately dissect the cyst wall from the ovary,” explains Shepherd, who completed her fellowship in advanced laparoscopic surgery. The cyst is drained and the surgeon drags its wall out like a deflated balloon. (Smaller cysts are not dealt with surgically; if they are found during laparoscopy, they are usually left alone.)

My surgery took an hour on the operating table and two more sleeping it off. They ran an immediate biopsy on the cyst, just to be sure, and it was gloriously benign. I could finally relax. I was sore, mostly from the CO2 moving up my chest cavity afterwards, but I was fully functional a few days later.

It’s been almost a year now since I had my cyst removed. The tiny scars on my stomach have faded and my ovaries are business as usual—but these days I insist on having an ultrasound along with my yearly Pap test. And this time, should another pesky cyst appear, I know there’s likely no reason to cry about it. 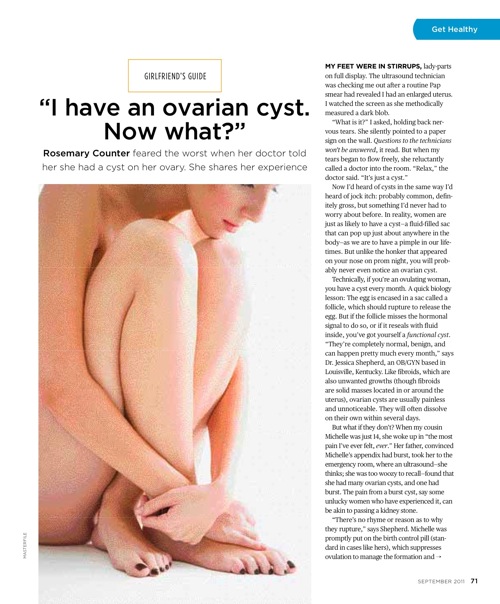 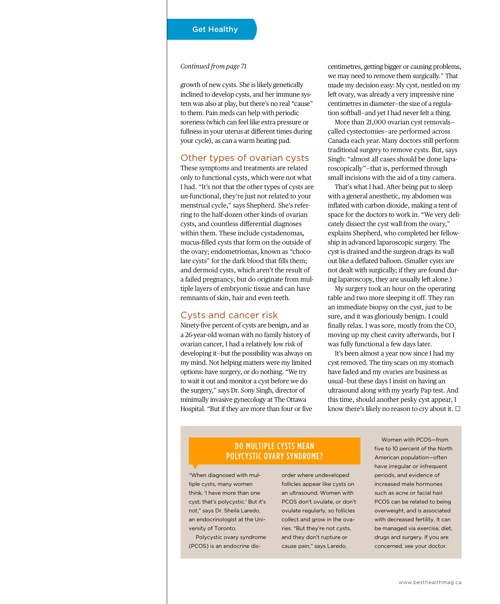