Forget the French manicure. Nails are the new canvases for visual art.

When Adele cleaned up at the Grammys this year, fashion bloggers went crazy. They weren’t gawking at her dress (sparkly black) or hair (newly blond), but the “Louboutin-inspired” manicure that matched her shoes: sparkly silver on top, tips filed into sharp points not unlike the iconic stilettos, and—of course—undersides painted red.

A new focus on the oft-overlooked manicure is exciting news to Sree Roy, managing editor at Nails Magazine in Los Angeles. Traditionally, there were two options for nails: too boring (French manicure, yawn) or too tacky (acrylic nails with piercings).

Now people see nail art on celebrities and rock stars, and “then it pops up on the runways, so it’s definitely becoming more mainstream,” says Roy. Serena Williams, known to rock sparkly rhinestones on the tennis court, gave Oprah an on-air pedicure while discussing plans to become a nail technician. Katy Perry hit the 2010 Video Music Awards with a different photo of then-fiancé Russell Brand on every nail. At New York Fashion Week this year, Kate Spade showed polka-dot nails and Nicole Miller did retro swirls.

Extreme nail art from the ancient Egyptians to modern-day Miami Beach is documented in Nailed: The History of Nail Culture and Dzine, by Chicago-based artist Carlos Rolon (aka Dzine). One design features 10 different Venetian masks on each finger, plus tiny circus performers on a couple of nails. Meticulously detailed 3D sculptures are “fantasy art,” explains Roy, fascinating to look at but “not wearable in regular life.”

Wearable or not, competition is fierce. In Canada, the top prize is the Contessa Award. “They’re considered the Oscars of the Canadian beauty industry,” says Jessica Ellison, a six-time winner and owner of Jolie Beauty Bar in Toronto. She is psyched for “the most amazing time I can remember in this industry.” The manicurist teaches at George Brown College in Toronto, where 10 years ago she told students in the nail technician course that creative nail art just wasn’t marketable. “But it’s just the opposite; we’ve got middle-aged women wearing the ombré to the office.”

From the French word for shadow, ombré nails change colour gradually—either from nail bed to tip or from thumb to pinky. Also huge at the moment is the magnetic mani, where compounds in the polish are attracted to a hovering magnet to create a chevron effect, and the caviar manicure, where pearlescent beads are sprinkled on top of wet polish.

From there, it’s a small leap to the Japanese-inspired designs that Ellison thought would never hit North America: 3-D nail art. “One year my team did Egyptian nails with 3-D acrylic tombs and King Tut on them. They were very cool, but seemed a little crazy.” Ellison’s never had so many requests for 3-D add-ons. “It’s not particularly practical, but people want the fantasy.”

All of these can be done at the salon—expect each nail to cost $2 to $5 on top of a regular $25 manicure—but there are do-it-yourself kits for just about everything (magnetic, caviar, stencilling, water marbling). For most people, it’s not about the money, it’s about the art—and sharing the creations with a burgeoning online community.

Brampton, Ont.’s Tammy Rex, the 44-year-old creator of Canadian Nail Fanatic, documents her own manicures five or six times a week. “Some people have a glass of wine every night. I do my nails,” she says. By profession, Rex is a condo property manager, but her passion is her blog, which now receives up to 1,000 hits a day.

“It started as a forum to keep track of my own art; I didn’t expect to have any followers.” Rex’s fans trade polishes and products from all over the world. “I’ve swapped to Australia, the UK, Singapore. Name a country and I’ve probably swapped there.” Her collection includes nearly 5,000 bottles of polish, and requires its own room.

It’s all relative, though. Unlike a closet of real Louboutins, nails are a more comfortable and affordable accessory, not to mention they’re temporary, too. “If you decide you don’t like your nail art, it’s not the end of the world,” says Roy. “You just get them done again.” 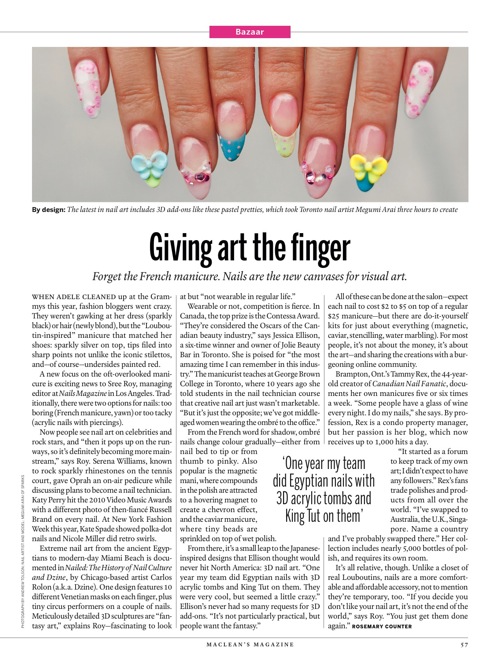