Haters are enjoying a technology-aided moment in pop culture, but love has always been mainstream

A few months ago, I contributed to a collection of travel tips by a group of experts (admittedly, not an actual profession — I’m just a good packer). Since I have many travel-loving friends and my livelihood depends on the not-always-tactful art of self-promotion, I posted the link to Facebook.

The first comment from cyberspace: “What makes you think you’re an expert?” (It was followed with a winking emoticon, its smirk mocking and disingenuous.) I dwelled on the sting, letting it fester and multiply. The wink felt knowing and superior and somehow smarter than me. I wish this story ended with me standing my ground and triumphing above that mean emoticon in a battle of wit; instead I sheepishly deleted the comment — and the post — and shrunk into a pitiful e-funk for the rest of the day.

Then, miraculously, the messages began pouring in: “What a [retracted slur for female genitalia]!” said one. “Don’t let them bring you down,” said another. And then the inevitable catchphrase for all unwanted and dismissible criticism: “Haters gonna hate.”

I was thankful and relieved. But hating on haters? Meta-haters? A backlash-backlash? I’m exhausted just thinking about it — and I’m not the only one who’s all hated out. Last week, McDonald’s rebranded its longtime slogan, “I’m Lovin’ It” into “Lovin’ Beats Hatin’. ” With one small tweak, McDonald’s aligned itself with the rising anti-hate movement online. When even the fast-food behemoth is feeling the bloat, you know you’ve reached full saturation.

Whether for your fellow man or a midnight McChicken, lovin’ — not hatin’ — is apparently the new natural human state. But even if it seems like haters have been hating since the beginning of time, it’s only been a dozen years since the all-girl group 3LW immortalized the concept, singing, “haters gonna hate” (also “callers gonna call,” though that didn’t stick). Having haters eventually became a status symbol in itself, at least for Kanye West, who in 2007’s “Stronger” proclaimed, “Take this, haters!” By this past summer, the term was so ubiquitous that Barack Obama casually complained Republicans are “hating all the time.”

But hate, in any medium, is a strong word. Casual or frivolous “haters” are only a few degrees from trolls, who are almost but not quite cyber-bullies. Situations too easily snowball to the tragic, as in the case of Rehtaeh Parsons or Robin Williams’ daughter Zelda, who was bullied off Twitter in the days following her father’s death. Relentless harassment of gamer Zoe Quinn in this recent #GamerGate controversy escalated until, last month, the FBI swooped in to investigate death threats.

Suddenly, hating isn’t as hilarious as thousands of silly memes — a fat man on a tiny bicycle, a dorky kid on a scooter — would have us believe. The apparent inevitability of haters, and the natural human inclination toward hating — and all at somebody else’s expense — starts to feel like blood on your hands. (As does this article, where having the last word — via national print — is surely its own version of hatin’.)

Our malaise with the societal-wide hate-a-thon is most evident in our treatment of celebrities, once just convenient punching bags. Last year, the collective hatred for Anne Hathaway — for winning an Oscar, for being vaguely annoying about it, for reminding you of someone you may have dated in high school — went so far as to require its own damning descriptor: Hath-a-hate. “Even now I can feel the shame,” Hathaway said many months later, having stepped away from the spotlight with “the impression people needed a break.”

This year, however, leaked nudes of Jennifer Lawrence — another young Oscar-winning actress, similarly peppy and reminiscent of your high-school girlfriend — didn’t boil over into the schadenfreude-fuelled hate-fest many predicted. Something shifted. Hate, even just a little bit of it, has been swapped for compassion.

If you tuned into Saturday Night Live last weekend, you’d have seen a commercial for “Swiftamine,” a drug that treats vertigo when you realize you do, in fact, like Taylor Swift. Hating her because you’re too cool is out; embracing the catchy beat and bouncing along to “Shake It Off” is in. After years of vitriol, Swift is having the last laugh in top-Billboard style. “Haters gonna hate hate hate hate hate,” she sings, taunting you with your feeble attempts not to dance. “Shake it off!”

Team Swift and the hater-haters are a growing number who have had enough hatin’ and arguin’ and debatin’. They are people like me who are just too damn tired to squabble online about everything and nothing. Perhaps they suffer from the maybe-real concept of “social media fatigue.” These are commenters who caution, “Don’t feed the trolls.” This is #TeamNoOne — and the most optimistic among them are fighting hate with the only and oldest antidote: love.

While hate has enjoyed a technology-aided moment in time, love has always been mainstream: the Bible says “love thy neighbour.” John Lennon sang, “Love is all you need.” Jack Layton declared, “Love is better than hate.” And now, with “Lovin’ Beats Hatin’, ” for better or for worse, love is going corporate.

Here’s what we forgot, though: When “I’m Lovin’ It” launched in the early 2000s, the campaign was feared to be the worst marketing mistake of its time. The New York Times ran an article of skeptical consultants. “The pundits were very suspicious,” one expert said of the slogan, adding “the public was not impressed.” In short, we were hatin’ it even then, but the slogan slowly proved itself a self-fulfilling prophecy. Soon enough we crossed the thin line and circled back. And so it goes.

At least for now, hate is out and love is back, with fries on the side. McDonald’s is all too eager to hop aboard the movement, and surely lots of haters will, yes, hate that, but maybe for a moment we might just indulge and enjoy. So pass me the love, with cheese, and please hold the hate. 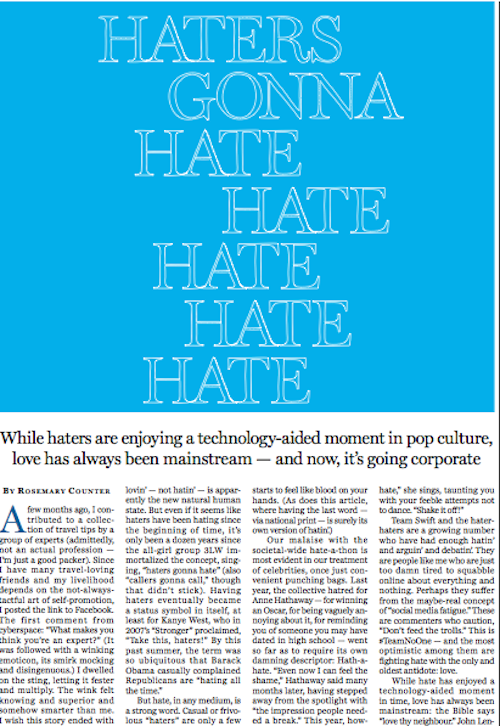 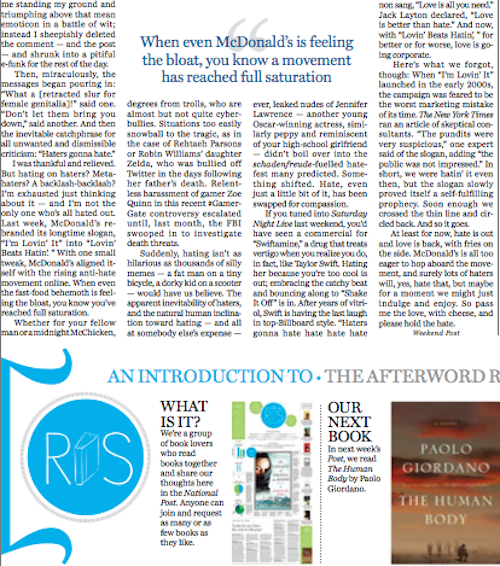