The ‘Right Age’ to Marry

If you’re thinking about getting married young, listen to Oprah

True embarrassing story: While I won’t be quoting my diary-writing tween self here — that’s just cruel — there was a time when she, I mean me, had a relationship plan with a timeline. 22 was the perfect age to get married, I thought, for sure and no exceptions. To my 14-year-old self, 22 was über-mature.

In my defense, I was only slightly dumber than Justin Bieber.

Thankfully, Oprah got a chance to speak to the Biebs and get her all-powerful two-cents- take in on the topic. “Re-think that, will ya?,” said the O. Maybe she should’ve also sat down with other young celebs ready to take the plunge.

Miley Cyrus, 19, announced her engagement in June. Ditto last year for 20-something Frances Bean Cobain. Even unlucky-in-love songstress Taylor Swift, 22, feels (mostly) the same way: “People think I want to get married really young — I don’t know why. I’m a romantic person, but that doesn’t mean I want to miss out on being in my young 20s.”

If Swift can hold out to the impossibly old age of 25, she’ll be living the college student’s romantic fantasy. Last week, researchers from Brigham Young University reported their findings in The Journal of Social and Personal Relationships. A national survey found college students think 25 is the “right age” to get married.

‘The assumption has been that the younger generation wants to delay marriage and parents are hassling them about when they would get married,” said Brian Willoughby, lead author of the study.

Which is only the opposite of what’s really happening, of course. Our parents — except for mine, but that’s another story — often got married young and fast. Having lived the teen dream, they’re actually advising we rein that business in. “The parental generation is showing the ‘slow down’ mindset more than the young adults,” said Willoughby.

The 2011 Census found married couples represent just 67% of families, down another two percent in the last five years. Meanwhile, the average age of first marriage — 31 for men, 28 for women — is creeping up still. The average age of delivering a first child in Canada crossed the threshold to 30 in 2007.

Ah, those stats should make us feel a little better, right?

Once I reached 22, and realized I was hardly any closer to adulthood than I’d been in high school, I raised my deadline — to 26, which also came and went. I’m now this close to 30, and only slightly nearer to settling down than I was at 22. I no longer believe in timelines, “right ages”, or fantasies in general.

Luckily, there are pop culture models for me to look up to.

Just last week in the tv sitcom 30 Rock, Tina Fey’s character Liz Lemon — 40-something and fabulous — scored a slightly unromantic proposal: “Let’s get married like every other idiot on Earth,” said her boyfriend.

Like hopeful brides everywhere, Liz lived her own teen dream, finally, and got to be a princess. Princess Leia, in fact.

“It’s the only white dress I own!” explained the blushing bride. 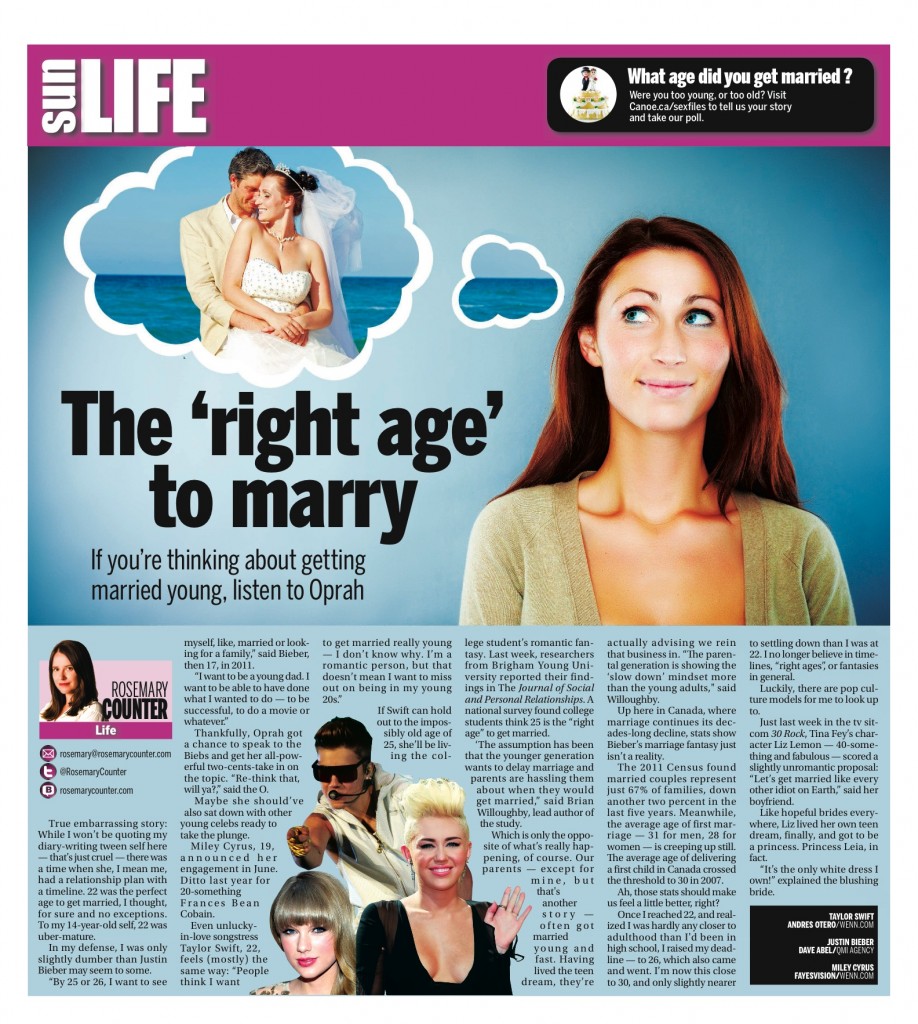