Why newlyweds may be less happy than we think

Seem like everyone and their best girl friend got engaged this holiday? You’re not imagining — almost a quarter of men get down on one knee right in time for a Christmas miracle. Just when you’d survived a whole year of weddings, weddings and more weddings, enter a whole new cohort of frenzied brides-to-be.

New matrimony junkies flock to TV for their fix: A Wedding Story, Engaged and Underage, Don’t Tell the Bride, Bulging Brides, Say Yes to the Dress, Bridezillas. In Four Weddings, four brides are pinned in a head-to-head competition for wedding perfection: “My expectations are large and elaborate,” says one bride; “I’m expecting a princess fairy tale, and I expect everything to be extravagant and perfect,” says another.

But, a twist: Research from eBay Canada found nearly one in four young Canadian couples, by then swimming in post-wedding debt, believe they overspent on their wedding. 13% of them re-sell their wedding items to close the gap.

Often, pain isn’t just in the wallet. “It’s very common for couples to feel down, depressed, or sad after their wedding—or as early as their honeymoon,” says Kimberly Moffit, a Toronto psychotherapist and relationship expert. As many as 10% of newlyweds are affected, and experts even have names for it, including the honeymoon blues or postnuptial depression.

“It boils down to what I call a wedding hangover,” explains Melissa Weinberg, lead author of a marriage happiness study at The Australian Centre on Quality of Life which was done last fall. Contrary to the much-hyped honeymoon phase, Weinberg’s research found newlyweds to be less happy than you might think.

On the study’s scale of one to 100, new couples ranked their marital bliss an average of 73.9; couples hitched for four decades or more averaged 79.8. It also found married people are happier than single people, and women are happier than men. (Widowed people, ironically, measured as one of the happiest cohorts in the bunch.)

“Couples build up to the wedding day as the best day of their life, and then find reality biting as they total up their wedding bills and get back to work after the honeymoon,” says Weinberg. “Big changes occur in the first year of married life, and not all of them are comfortable for newlyweds.”

Best to avoid the honeymoon hangover by planning in advance. “Brides with honeymoon hangovers are the ones who focused on the wedding day instead of the actual marriage,” says Moffit, suggesting you incorporate the things you loved about your big day—ballroom dancing, perhaps—into your real life. “By looking forward to your married life together, you increase your chances of staying happy after the actual wedding day,” she says. 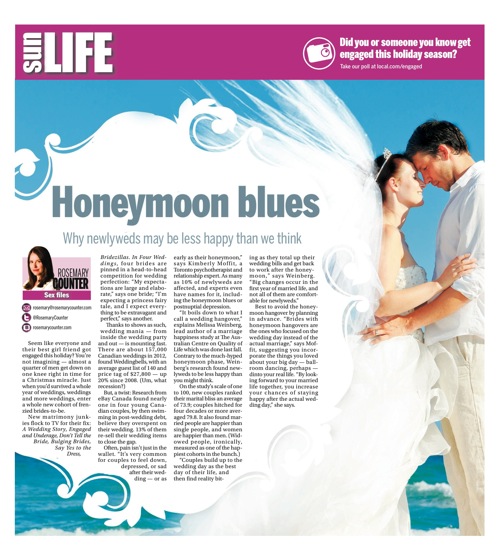