There’s a famous shirt reading This is What a Feminist Looks Like, worn by cheeky feminists, ironic activists and – just once on the cover of Ms. magazine – President Barack Obama. The point, of course, is that feminists come in all shapes and sizes, in both genders and across all age groups, and sometimes where you least expect it.

But I might be wrong, says Carrie Pitzulo, author of Bachelors and Bunnies: The Sexual Politics of Playboy. She says there’s more to Hugh Hefner – the Chicago hedonist who created Playboy in 1953 and morphed it from a magazine to a lifestyle to a brand – than the swift dismissals offered by most feminists (rumour is Gloria Steinem told him, “A woman reading Playboy feels a little like a Jew reading a Nazi manual”).

Digging though archives of memos, correspondence and readers’ letters, Pitzulo asks some unlikely questions: Is it possible to reinterpret Hefner as the creator of sex positivism? As a liberator of women from a rigid Madonna-whore dichotomy? An usher of all genders into a modern age of individual freedoms? Or, as I suspect, is a “revisionist interpretation” a whole lot of wishful thinking?

In search of answers, Pitzulo begins with what we’re all thinking: the centrefolds. While objectification comes straight to mind, Hefner believes playmates are “glorified” as a “friend and equal.” And, to his credit, they’re far from wanton libertines or nameless nudes: Through interviews, the playmates are often presented as educated, assertive, hard-working and individualist (also presented, however, are their measurements).

Hefner doesn’t see any of this as degrading, of course, nor does he think anything less of girls who pose nude (in fact, Hefner even persuades Playboy’s receptionist to strip, in what’s now known as “sexual harassment”). Perhaps most important, and without even trying, “Playboy insisted women had desire, indeed a right to desire, just as society assumed men did.”

And to go with the pictures, articles such as Don’t Hate Yourself in the Morning walk a fine line between deeply offensive and refreshingly liberating. As Playboy becomes increasingly journalistic in the mid-sixties (giving the old excuse “I only read it for the articles” new merit), the magazine explored liberal positions on civil rights, Vietnam, free speech and a “surprising degree of fair and sympathetic gender politics.” Among hard-hitting articles about all this political upheaval – many times I wondered if Hefner had just found himself in the right place at the right time – are pieces for men about fashion, cooking and home decor. Though Hefner was famously fixated on male roles and “womanization,” there’s no denying he was a modern metrosexual long before this generation made it cool.

Though always at its strongest when serving his own bed-hopping agenda, Hefner’s public support of feminist causes – birth control, equality, abortion rights – is as impressive as it is surprising. As is Hef’s ideology of gender as a social construct and sexuality as a wide spectrum. Unfortunately, Bachelors and Bunnies is more academic than biographical, a possible mismatch in tone and topic, so we don’t get many of the dirty details, which, when it comes to Hefner, is possibly the best part. Also largely missing is any meaningful comparison to Helen Gurley Brown, Cosmopolitan magazine’s editor-in-chief, Sex and the Single Girl author and Hefner’s natural editorial foil (they’re buds, actually). A story like Playboy’s, as much as it demands intense cultural critique, could benefit from a well-placed wink. 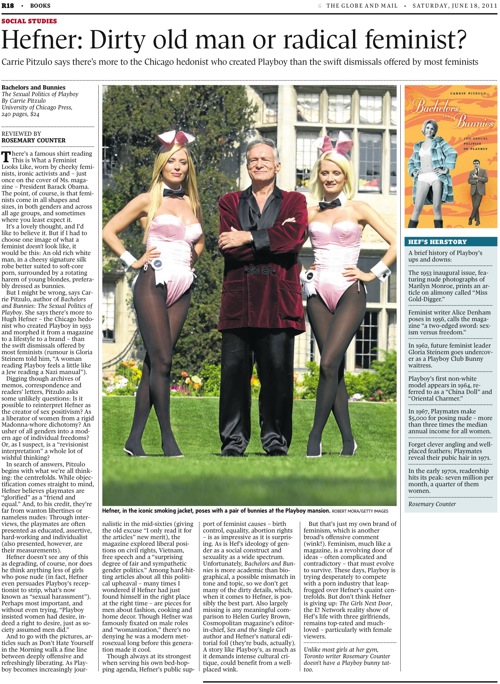