Between the dipping and frying were the 15-minute breaks

Years before legendary fashion journalist Jeanne Beker became a famous face on Canadian television screens, the long-time host of FashionTelevision held a not-so-swanky (and a whole lot… oilier?) job making waffles at the Canadian National Exhibition in Toronto. But could the ever-elegant fashionista last 10 gruelling days in the sweltering heat tending to a vat full of hot oil? In the next instalment of our summer job series, First Hand finds out.

I got my very first summer job at 16 through a friend of my mother’s, who had a very enterprising son who had decided to start a booth in the food building at The Ex selling the “World’s Largest Waffle.” Not really, of course, but they were pretty big-seeming at the time. They were coated in icing sugar and shaped like a flower. He roped me in, and then I roped my best friend Marsha in too, so we could be co-workers.

The son had got the whole operation sponsored by Robin Hood Flour, which provided these green velvet tops and matching Robin Hood hats with a feather. At first, I kinda thought the uniform was a bit chic. I paired it with a miniskirt — this was 1968 — and tried to accessorize. The black velvet hat was kinda fun. I was a young and aspiring actress at the time, so it all felt very theatrical and the costume was right up my alley.

Then I actually worked in the costume for a while and I totally changed my mind. The sleeves were long and the velvet was so thick. There was no air conditioning in there, and it’s August, and I’m standing over this vat of oil. The word “hot” doesn’t even begin to describe it.

The vats were huge, probably like four feet wide and three feet deep. All we had to do was dip this waffle-shaped contraption into batter and then put it into the oil for a minute or two, I can’t remember how long. This was a long time ago, darling. Then the whole thing would get covered in sugar like a doughnut, so even though I was sick of them by the end of the first day, of course they were a big hit.

If you were lucky, you might get to give out samples for a while, but in general, you’d just dip and fry, all day. But you did get a break, and this is what it was all really about. Break was only 15 minutes, and I didn’t have time to change so I’d have to go dressed like Robin Hood, but those breaks are what made the whole thing worth it. There was a whole lot of young summer socializing happening. Guys would come over to flirt with us, and your friends would come visit you, and your friends who worked the rides gave you free rides. It was such a crazy time and I ended up working there for a few more summers. I’d look forward to it all year.

For those 10 days, we’d work like 12 or 14 hours a day, from opening to close. I could never speculate about how many waffles I made, but countless, untold waffles. Not that I was getting rich on waffles. Minimum wage was like $2.50 an hour at the time. You definitely didn’t do an Ex job for the money.

I can’t say I really learned any big lesson that changed my life, but I did really love my job. In retrospect, I mean. I actually only lasted about six days of 10 before I quit. Not the whole Ex, just the waffle job. It was just way too hot. My new thing was selling these flying papier mâché birdies with feathers on the runway on these wooden canes. I’d say, “Birdie, birdie, who wants a birdie?!” People loved those birdies. I liked the fairway breeze. 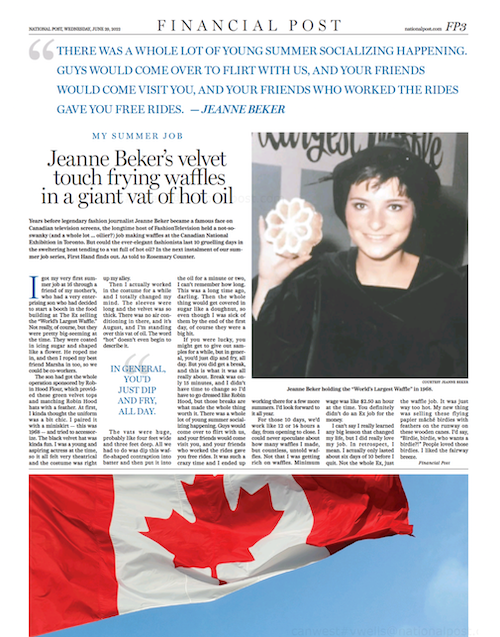