The gig taught him a thing or two about journalistic integrity

Author, historian, journalist, TV and radio broadcaster, former Liberal party leader and former leader of the opposition Michael Ignatieff began his impressive career trajectory as the youngest reporter at the Globe and Mail, then a smoke-filled Old Boys club permeated with the deafening din of typewriters. Here’s how the first-year University of Toronto student landed the coveted cub reporter gig and what it taught him about journalistic integrity. As told to Rosemary Counter.

The summer after my first year at university, I sent my resume to the Globe and applied to be a reporter. I see now that it was probably a highly corrupt story but I suspect someone put in a good word for me. The theatre critic at the time was a great friend of my aunt who I’m sure told someone I was kosher. I was fully aware that I was very lucky to have the job and I was very, very excited to be in a newsroom in a big city. They even paid me, just a little bit, though I would have done it for free.

They sat me beside the wonderful Joan Hollobon, a brisk, white-haired English woman who was actually the medical correspondent. Can you imagine, a full-time dedicated public health reporter? Anyway, in an office that was almost entirely men with cigarettes hanging out of their mouths, they sat me right beside her and (she) took me under her wing. I really thought I would just be writing essays like I did at school and there’d hardly be a difference at all. I remember her teaching me about what an article’s “lead” was and why I needed one.

You have to understand the Globe and Mail in 1965 bears absolutely no relation to any newsroom you’d see now. We had typewriters, great rows of them, and people were banging on them with two fingers. It was so noisy in there, you can hardly imagine, especially between 5:30 and 6 p.m. when everyone was banging out stories before deadline. It was a very different environment, even aurally, with an actual rhythm.

Then the office would clear out, everyone would go drinking except me, being underage. And I did a lot of night shifts, the midnight to 8 a.m. graveyard shift, which we also called the “lobster shift” for some reason. I’d be up on the 15th or 16th floor, I think, looking out over the lights of the city and sitting there at the desk listening to the police radio all night. Then there’d be a call finally and I’d have to run there to see if there was blood on the street. Or the cops would be chasing someone, speeding through lights along Bloor, and if there was a big enough bang at the end, I’d have to go check it out and see if anyone was dead.

The first time I actually had a story with a byline though — oh, I’m ashamed to tell you this — was when this dating service was a new thing. It was like what we’d now call dating apps, but all pre-internet and on paper, where people sent in their particulars and they’d send you back a list of matches. I was tasked to go on a number of dates with girls who put their names in and then write about it.

It was kind of a sting operation because I didn’t disclose that I was a journalist. I was violating all kinds of codes of journalism to get the story, even though for the record nobody told me not to. It was the first time in my life I’d have my name in the newspaper, which felt amazing for about 30 seconds until one of the women rang the paper and told me how disappointed she was with my behaviour. They were all extremely nice women, and I felt terrible. I still do.

After that, I thought a lot about ethics. Full disclosure: I also had a girlfriend at the time, so it was even worse. I’m not proud but it happened, dammit. I became more honest and more diligent. I started to admire those people and aspired to be more like them. And I met all the people whose names I knew from reading them in the paper, who were a big deal to me, and I was stuck by how kind they were — and just normal. There have been people in this life that I’ve met and been totally starstruck, but not too often, because the Globe taught me we’re all just people. 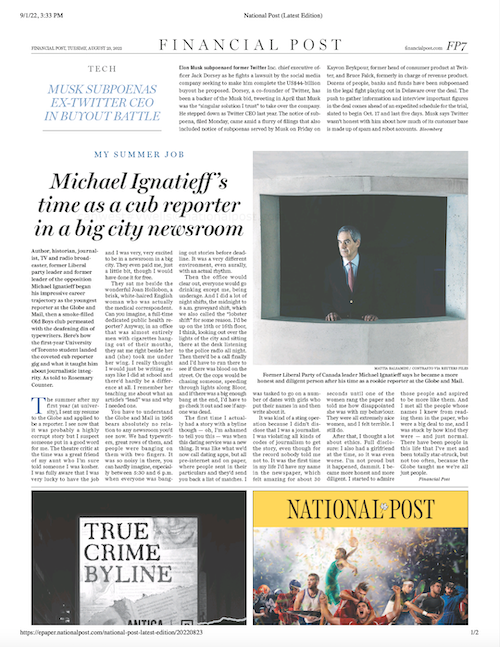