Long before power broker Wes Hall founded Kingsdale Advisors and BlackNorth Initiative and became the unofficial “King of Bay Street,” he was an 18-year-old desperate for a summer job and willing to do pretty much anything — or so he thought. What kind of gig is worse than he ever thought possible? Read on in this week’s edition of First Hand’s summer job series for a very different lesson than the usual “stick it out.” As told to Rosemary Counter.

I’ve had many terrible jobs, but the worst one of them all was at a chicken factory. I’d just graduated high school and had no idea what I’d do next. My buddy Steve’s mom worked at this chicken factory, and they were looking for people, so she suggested I go in with her one day. I should have known that it was gonna be bad, because Steve wouldn’t work there. That was a clue but I missed it.

I got up at 4 a.m. to take a bus to meet Steve’s mom and we drove together to the factory. When we got there, the manager gave me a white coat and a hairnet to wear. He stood me at the assembly line and said, “the chickens come from over here, down the line, and their butts will be at the bottom. Here’s your vacuum.” I was going to be sucking everything out.

Everybody in the assembly line was over 60 and lots didn’t speak any English. So there wasn’t any talking really, just the vacuum sound, like ssshhhffft! ssshhhffft! The workers were all so performative, just totally cool with this task. I’m just looking around thinking, this can’t be me. I can’t do this. I thought about how this was gonna be nine hours a day, with a half-hour lunch and two 15-minute breaks, for the rest of my life. I lasted one hour.

I go to my supervisor and say, “I’m sorry, I can’t.” They sent me to HR who said they’d find me something else to do. I was thinking maybe I’d get a desk, even though I had no skills or education or experience. Instead they moved me to the live chicken section. My job there would be to take them out of the crate and put them onto the assembly line with their heads hanging down to be chopped off. Now I’m a chicken grim reaper.

The chickens would look right in my eyes like they knew exactly what was going on. Death is coming and it’s from this guy. Some would fight me, squawking and scratching and going absolutely nuts. They knew something bad was about to happen and they were right. I felt so bad for them and for me too. I’m thinking, I don’t want to quit because I’m not a quitter but I really do want to quit, so maybe I am a quitter?

An hour of this later I went back to HR and said, “I’m sorry, but I can’t do this job either.” They said they had nothing else for me, which was a relief. I waited around in the cafeteria for the rest of the day for Steve’s mom, who berated me the whole drive home. She said I was lazy and I had no work ethic. But I knew that wasn’t it. I would work hard, just not at this.

It was only a couple of hours, but the job taught me that if something isn’t working, you can give it up. You know in your heart if it’s wrong for you. I work with entrepreneurs now and I see people stick for years with ideas or businesses that aren’t working or they don’t even like anymore. I tell them it’s OK to pivot. If it’s not working, you can go. Or you can go to the boss and say, “Is there something better for me here?”

They might say no, like that HR person. He basically said, “These are the only two jobs in the whole organization that you’re capable of doing.” He was pigeonholing me, trying to tell me where my station in life should be, but I wouldn’t listen. My message to him was, “I disagree with you that I belong here and in fact I’m gonna move on.” I’m so glad I did, because I might otherwise still be there, struggling to get by, hearing ssshhhffft! ssshhhffft! all day long. I moved on right then, though it took me a while to look at a restaurant menu and say, “I’ll have the chicken.” 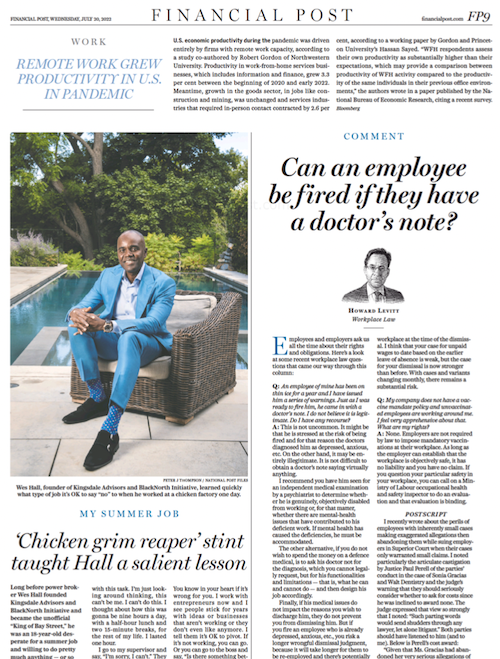