Long before Shark Tank and Dragons’ Den, investor and entrepreneur Robert Herjavec was an aimless teenager considering if and when he should pursue higher education. In the meantime, Herjavec’s father — a blue-collar Croatian immigrant who worked long hard hours at Toronto grocery store Dominion — pulled a string to get his son a summer job. Here’s what stacking boxes taught the chief executive of Cyderes about his future in business. As told to Rosemary Counter.

When I was 17, I was saying things like, “I don’t need school. I just want to go into the real world and make money.” My dad was a millwright who worked on machines at Dominion, the old grocery store. I think he thought, You think life’s that easy? Come to work with me, why don’t you?

My dad helped me get the job but before I started, he warned, “You should never take a job just for the money. Go get a job where you learn something.” And I’m like, “Dad, that’s ridiculous! This job pays so much!” My only job would be to load packed boxes into the back of trucks.

I worked like eight or nine hours a day, and even though it was during the day, it was always dark because I was deep in the back of a massive 18-wheeler. It was dark and dusty in there. Packed boxes came down a conveyor, very quickly, and they’re all different shapes and sizes. As fast as you possibly can you’d have to decide how to stack them as efficiently as possible. I’d have to think, Here’s a square one and there’s a rectangle coming up next so where should I put it? The job actually made me really good at Tetris.

If the boxes came faster than you could load, you’d have to go and press a button. Then the supervisor would come over and say, “What’s the problem here? Work faster!” The whole of the job was not to do this. This only happened once or twice to me.

I became friends with the kid loading the truck next to me. We bonded over how hard this job was and how much we loved complaining about it. He was also Croatian, so we had lots in common. Anyhow that guy was Victor Dodig, now the CEO of CIBC (Canadian Imperial Bank of Commerce). We see each other all the time and every time we go, “Oh my God, remember the trucks?”

I remember it all as clearly as yesterday. I can even still hear the clickity-click, clickity-click of the conveyor belts. Sometimes you remember the hard things in life more because they mould you more than the easy things. And it was so hard. My hands would be dirty and my body was always sore. At the end of the day, I would be absolutely exhausted.

The job gave me an immense appreciation of people who do physical labour, especially my dad. For years he’d been sweeping floors and loading trucks and doing whatever it takes no matter how hard it was. I saw how hard life can be and learned to respect anybody and everybody who works for a living. Not that there’s anything wrong with that kind of work, it’s just not for me. I’m a hard-working guy, but very soft. I admit it.

Two weeks in, I wanted to quit. My dad said, “No way. You signed up for this and you’re sticking with it for the whole summer.” He taught me when you commit to something, you do it. My dad didn’t have a lot of choices in life, he didn’t have the option of walking away at the end of the summer. I think secretly my dad was worried that I wasn’t going to finish school. In his own way, without saying anything at all, he encouraged me to go to school and give myself options.

So I worked the whole summer. Eventually I got used to the physical part of the job, but never the monotony. I had a lot of time to think. At first it was just, “Why am I in a truck loading boxes? I don’t want to be here.” Then it was what I’d do next. I thought about a million different businesses that I was going to build one day. The job made me want to finish school and also so grateful that I had the choice and opportunity. There had to be a better way for me and I just had to find it. 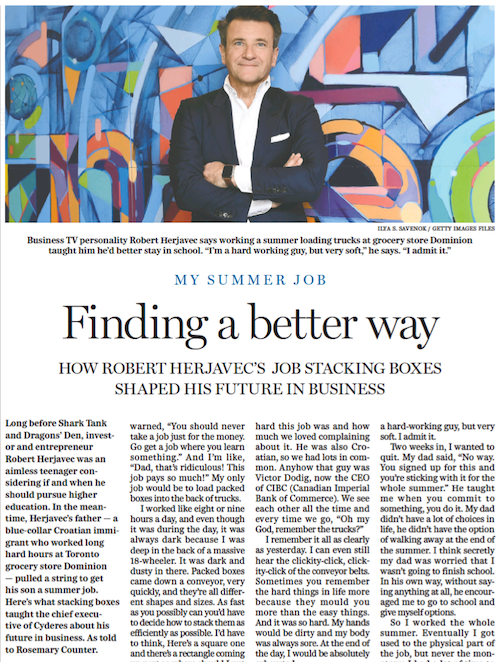