Oh, to be as awesome as Julia Bluhm, the 14-year-old girl activist from Waterville, Maine, who petitioned Seventeen magazine to ditch airbrushing already.

“For the sake of all the struggling girls all over America, who read Seventeen and think these fake images are what they should be, I’m stepping up,” she wrote in her petition on Change.org. “I know how hurtful these photoshopped images can be. I’m a teenage girl, and I don’t like what I see.”

Pretty impressive, am I right? My teenage self, from 12 on — because I was thoroughly convinced teenhood actually began at 12 (it doesn’t) —religiously sucked in Seventeen, YM (I’m dating myself here) and even Cosmo (when no one was looking). The fact that any and all images were, as Bluhm describes them, completely fake, never really crossed my mind.

But the fact that I was super fat, a bit greasy, and probably needed a nose job never left my brain. Science proves it: three out of four girls feel depressed, guilty and shameful after just minutes with a fashion mag, so at least I was normal.

A decade and a half later, things are better, maybe. Emma, a 17-year-old from Toronto, doesn’t read Seventeen. “I don’t particularly care for the whole genre,” she says, “but I think it’s wonderful that photo manipulating will be banned. Lots of girls feel the need to force themselves to meet unhealthy standards, and I hope this helps them learn that all shapes are natural and beautiful.”

Once an aspiring model, Emma’s since quit the biz with her self-esteem intact. “I know who I am and I know I’m healthy,” she says. But then the teeny-weeny teenager adds: “I have a bit of a belly, yes, but that’s normal.”

Lucky Emma has grown up with a pile of pro-self esteem campaigns and a slew of organizations behind them. The first I remember —groundbreaking at the time — was a 1998 Body Shop ad featuring a “real-sized” Barbie and an awesome thought-to-ponder: “There are 3 billion women who don’t look like supermodels and only 8 who do.”

A few years later, in 2004 to be exact, Dove launched its Real Beauty campaign. If you live under a rock (or are of the male persuasion) and missed Dove’s “Evolution” video — where a pretty girl is transformed via makeup and airbrushing into the robot-esque billboards we’re used to.

And by today, possibly the awesomest time to be alive in the uprising against too-skinny models bumming out our brains, success is palpable: Madrid imposed a minimum BMI standard for its catwalks (30% of the models were sent home to eat a burger) and Vogue vetoed anyone underweight or less than 16 years of age. It was the first time a magazine self-imposed its own rule.

But not the last, thanks largely to Bluhm (and the 84,000 and counting who signed her online petition). Seventeen has offered up the “Body Peace Treaty” — signed by the entire staff are a list of eight vows, including “never change girls’ body or face shape” and “always feature real girls and models who are healthy.”

Also on the list is “Say goodbye to those nagging insecurities that you’re not good enough or pretty enough — they’re holding you back from being awesome in the world!” A big goal for real and repressed teens everywhere, but at least we’re headed in a good direction. And me too, still with my original nose, no less. 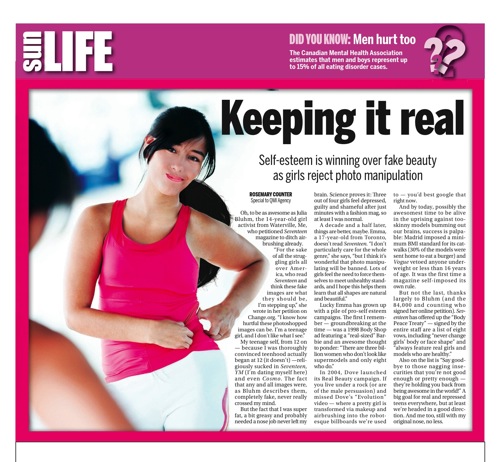