You want constructive feedback, but a departing manager is the last person to give it to you straight

Would 30-year-old Megan Vickell ever return to the PR firm she just quit? “Only when all the bad apples here are made into applesauce,” she said in her exit interview. With a pile of job options in front of her, Vickell felt she “had nothing to lose—and suddenly some power.” And it’s no wonder. Exit interviews have long been a one-way street where desperate managers try to extract info from a departing employee to improve their business: Why are they leaving? What could the company do differently to keep them? Is this interview useful in the slightest?

Not at all, says Twitter CEO Dick Costolo. During a keynote talk at Fortune’s Great Place to Work conference last month, Costolo said he had a “bone to pick” with the management procedure. “The reasons people are leaving sound the exact same as when I break up with someone I’m dating,” he explained. Managers can mostly expect some tactful variety of, “it’s not you; it’s me,” he says.

In other words, expect a very polite lie. “The truth is, everyone quits their manager,” says Costolo. The details—managers don’t communicate, give ownership or take accountability—are the meaningful feedback they need to hear, but many employees will never give them. “It’s a small world,” says Costolo, and since the relationship is already over, clever quitters know not to “throw themselves under the bus on the way out the door.”

Then there are the not-so-calculating quitters, like Vickell, who are too angry and emotional to offer constructive criticism. It’s the catch-22 that makes most exit interviews useless: Departing employees are either so mad there’s no way they’ll help a former boss, or they’re not mad enough to offer criticism and burn a bridge.

Still, because interviews promise a wealth of insider truth, many companies insist on them out of habit. “Like anything, if you’re just doing exit interviews because you think you have to, skip them,” says Cissy Pau, principal consultant at Vancouver’s Clear HR. “Only do them if you really want feedback, really want to know what other companies offer that you don’t. Managers have to want it.”

If managers are on good enough terms with employees for a casual conversation over beers, by all means informalize the process. For those who are not chummy anymore, technology is a manager’s new best friend. Clear HR works with companies to customize anonymous surveys, ques- tionnaires and written interviews that let employees speak freely and think through their responses. “A written interview offers little check boxes, but the employee can take it home and go slow,” says Pau. “You’ll get more thoughtful, constructive feedback—not an emotional reaction.”

If (and only if ) the employee is receptive, use the written portion as structure for an in-person followup. This may be with the manager, but not necessarily. “If the manager is angry or defensive, they shouldn’t be the interviewer. Use judgment to figure out who might solicit the best feed- back, or outsource it to HR or externally,” says Pau. When companies outsource interviews, even the bitterest of quitters become more receptive. “When employees talk to us, more often than not, they’re very willing to give constructive feedback,” she says. “They’re hoping to effect some change.”

Which was Megan Vickell’s plan exactly. “I had a lot I needed to unload,” she says, and HR was a safe place to do so. “I started with my boss—how poorly he treated me—then I snow-balled into an epic speech about issues and politics at the agency. I even cried a little.” The HR woman said she’d never seen an exit interview with such conviction, and Vickell left riding high. “It felt really good for me,” she says. “I don’t know if they got what they wanted out of it.” 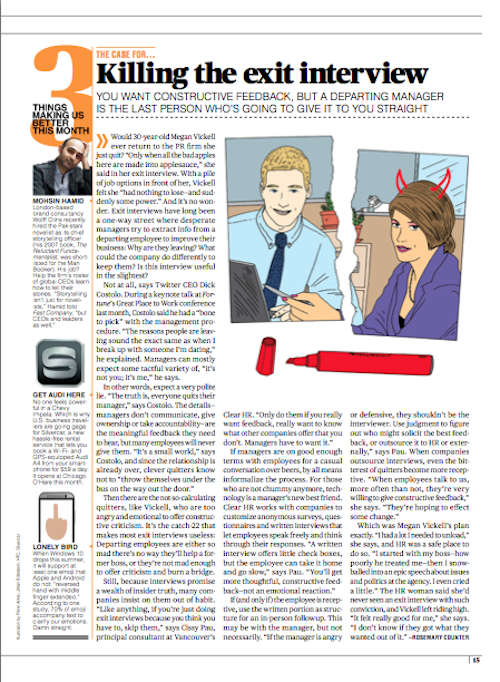