Five years after getting off the ground, B.C.-based Bluebird Strategy, a boutique marketing and events firm, has been a driving force behind some 40 events, festivals and conferences. But its ambitious founder, Heather Odendaal, has always seen success as more than just business expansion — growth has to happen on a personal level too.

Whenever she looked for forums that would prepare her for the next stage of her career, however, she would come up empty. She found conferences for newbie entrepreneurs and Fortune 500ers, but it was slim pickings for those in between. The events she did go to were stuffy, impersonal and over-programmed.

“It’s an important time, when you know exactly where you want to go, but you’re not there yet,” says Odendaal, 34. So in absence of an event that could groom her for higher levels of success — and mind- ful that even though women represent more than half of the Canadian workforce, they occupy just 8.5 percent of the highest-paid positions in Canada’s top 100 companies — she decided to create her own.

The inaugural WNORTH conference, a “Global Gathering of Women on the Rise,” took place in March 2015, drawing 120 businesswomen — executives, VPs and directors from corporate, public and entrepreneurial sectors — from around the world. It was largely a two-person operation, with all the logistics handled by Odendaal and her husband, Mike. This April, the two-day event, organized by a committee of 11 women, will be held at Whistler’s Nita Lake Lodge and will host 180 attendees.

The programming revolves around issues specific to women and business. “Image, Authenticity and Power” was a popular talk last year, as was “Will This Baby Wreck My Career?” This year, the speakers include Veronica Juarez from Lyft, the Uber-esque women-friendly car service, and Elizabeth Cronise McLaughlin from 40 Percent and Rising, an American organization that supports career women through both personal and professional challenges.

Karin Muchall, a development leader with PwC (a professional services firm in Toronto) who is attending the conference, sees it as a prime networking opportunity. Women “don’t often get a chance to pause and focus on our own growth and aspirations,” she says.

Odendaal also partners with companies that are run by women wherever she can. For instance, Nita Lake Lodge is run by a female general manager, Theresa Ginter — who plans to attend as well. “She is the only female represented on the hotel association board of directors,” says Odendaal. “She’s living exactly what we’re talking about here.” Odendaal also built “white space” into the day — hours set aside without programming so attendees can Skype home. And even the cham- pagne that will be served at the conference, Veuve Clicquot (also a sponsor), carries symbolic meaning: Madame Clicquot Ponsardin is the woman who first developed the drink in 1805.

Odendaal hopes WNORTH can continue for years and help change the landscape of corporate boards across the country. “My hope is they’ll come year after year to network their way to the top.” 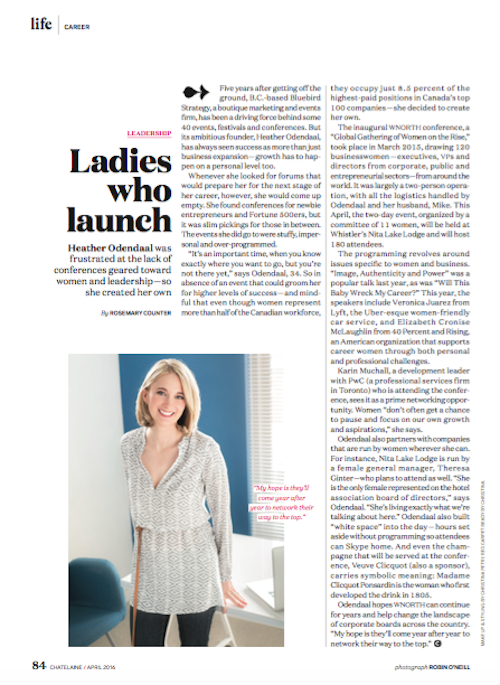