Forget Weight Watchers. Here’s a 24-7 support group to hang on your every tweet.

If you’ve been lucky enough never to find yourself at a Weight Watchers meeting, it goes something like this: a dozen dieters, mostly women, sit in a circle. In turn, but only if they want to, they share their weekly progress. “I lost 0.4 lb.,” someone might say. The rest of the room claps.

To encourage an appearance the next week, peppy leaders reiterate one staple statistic of the 50-year-old program: people who attend meetings regularly lose three times the weight as those who do not. Nonetheless, just two years after its last relaunch, Weight Watchers is revamping again (with its online 360° program) in an effort to keep up with the times.

Some dieters are already a tweet ahead. “I love a good meeting, but there wasn’t always a meeting when I needed it,” says 43-year-old Rebecca Regnier, a television reporter from Ohio. For her—and 58 per cent of Canadians who Weight Watchers says tried to lose weight in the last year—Twitter is always there. “When it’s 2 a.m. and I’m fighting a snack craving, it’s not 2 a.m. in Australia. I have friends there to talk me out of it.”

To her ever-expanding network, Regnier’s tweets include healthy humblebrags (“An apple handled some pre-lunch cravings for me today. Yay apple!”), support for her followers (“Don’t quit! Restart”), and admissions of gluttony (“I had a candy-bar-in-the-car moment”).

Despite periodic transgressions, all documented on @LaughItOff to almost 9,000 followers, Regnier lost 20 lb. How she did it—in short, choose any diet that works for you, follow experts in the field, connect with followers for support—became the ebook Your Twitter Diet, one of many that marries dieting with social-media oversharing.

Web options include Tweet What You Eat and Tweet Your Weight. GQ correspondent Drew Magary, down 60 lb., tweets his weight every morning in what he calls the “public humiliation diet.” With just the push of a button, an endless series of websites (Lose It, FitDay, SparkPeople) and apps (My Diet Coach, Thin Cam, the Eatery) can broadcast every bite into cyberspace.

Doing so isn’t always as easy as it seems. Meegan Dowe, a 33-year-old education coordinator from Halifax, who used to blog about her weight struggles anonymously, used the MyFitnessPal app to track her 90-lb. loss. “It tweets both the food I eat and the calories I burn,” she explains.

Though she hates to admit it, Dowe doesn’t think she could have lost the weight without Twitter. “It gave me a community I didn’t have; people at a similar weight as me and with the same frustrations,” she says. While people are almost always positive, sometimes they’re nasty. “I’ve heard things like, ‘You only burned 300 calories in 60 minutes? I could do it in 20.’ ”

Unlike Weight Watchers, Twitter is far from a private place. For those who thrive on aggressive competition, like GQ’s Magary, this might be “its own incentive anyway,” he wrote. Others, not so much, says Weight Watchers’ chief scientist, Karen Miller-Kovach. “Social dieting is probably great for some and terrible for others.” The research is mixed, she says. It’s generally accepted that obesity is socially contagious, and that more and better support is associated with long-term weight loss. If social media are part of your support system, reported the Archives of Internal Medicine in December, then they can certainly help your progress. But they can’t be your only trick. “You’re not going to tweet yourself to thinness, but if you’re following a program and also tweeting about it, you may see more success,” says Miller-Kovach.

If a public weigh-in feels akin to modern torture, the Twitter diet could be detrimental. “It can reinforce shame. It can be embarrassing, humiliating and not at all helpful,” she says.

Regnier admits to feeling the shame “just a little bit.” For binge eaters like her, food sessions are often solitary and shameful, and a midnight Twitter confession forces an accountability she might otherwise not have. “But seriously,” she asks, “if you’re not willing to share with someone what you’re eating, then why are you eating it?” 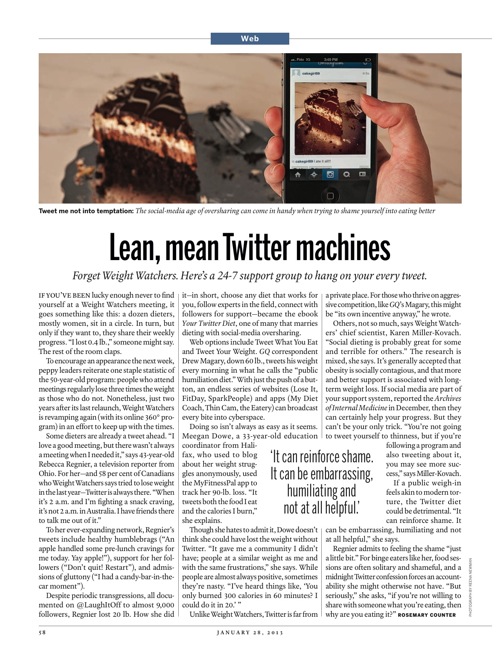