Is crying on the job a sign of weakness?

Whether it’s acceptable or not, Chris Harris is a crier. “For me, it’s just a natural reaction,” says the 31-year-old manager. His last radio job in Regina involved conflict resolution with big personalities and big egos, all on stressful daily deadlines. “Frustration leads my eyes to well up, and I end up choking back tears.” It’s happened quite a few times, Harris admits, but he isn’t too embarrassed to tell the world in print. “I wouldn’t suggest crying as a tactic, but I’m sure it makes me more human. A bit of crying can reinforce some endearing traits.”

For years, the consensus has deemed workplace crying shameful but inevitable. And since 41% of women have admitted to having cried at work, it was largely considered a female habit. In 2010, If You Have to Cry, Go Outside was a bestseller for fashion publicist Kelly Cutrone, but by 2013, Sheryl Sandberg was giving different advice to young career climbers in Lean In.

A year into her Facebook career and sad that someone was spreading false rumours about her, Sandberg burst into tears in front of Mark Zuckerberg. Rather than the awkward career sabotage we’ve been conditioned to expect, the teary situation had the opposite effect. “It was a breakthrough moment for us,” Sandberg wrote. “I felt closer to him than ever before.”

Crying women are often called “emotional” or (even worse) “hormonal”—though it’s technically true; women have six times more prolactin, a hormone related to crying, than men—making their tears seem dismissible. Not so for men. When the 9% of men who admitted to crying at the office shed work tears, you know they really meant them. Especially if that man is the boss.

Look to the very top: President Barack Obama cried in 2008 while thanking his campaign staff; he cried after the Newtown shooting; he cried when his grandmother died and, in April, when thinking of his daughter leaving for college. “I start tearing up in the middle of the day,” he said, without a hint of shame. An appropriate, well-timed cry looks good on the most powerful among us. Both Bill Gates and Steve Jobs were rumoured to stress-cry on the job.

It may be a repercussionless sob when you’re atop the chain of com- mand. “If you’re Steve Jobs and you wanna cry, OK. But does Jobs’ number two cry?” asks business coach Christopher V. Flett. For traditionalists like him, the answer is a dry-eyed no. “If somebody dies or if you cut your finger off, you can cry at work. That’s the only time.” Anything else, says Flett, is nothing short of “professional suicide.”

For marketing strategist Rikia Saddy, however, it’s all about good tears and bad tears. “Bad tears come from a place of anger, frustration and powerlessness,” she says. Authentic tears from genuine emotion are a rare display and worth sharing. “If you’re the CEO and you’re laying off 200 good people, and you feel it enough to cry, you absolutely should,” she says.

As for everyone else, if and when you feel the floodgates opening, wipe a tear away with dignity and politely excuse yourself from the conversation. “Don’t make a big deal about it,” says career coach Shirin Khamisa, founder of Careers by Design. Find a private place to breathe and compose yourself—Harris takes a walk outside—then get back to work. “Don’t feel compelled to explain,” she says. “This can make the emotional display a larger issue than it is.”

Look closely at why you’re upset—as it could have nothing to do with the situation at hand—and fix it ASAP. “Don’t brush it under the rug. There may be another issue that sparked an outpouring,” says Khamisa. And remember that there’s no need to feel ashamed. You may have just won some favour and sympathy from your team. 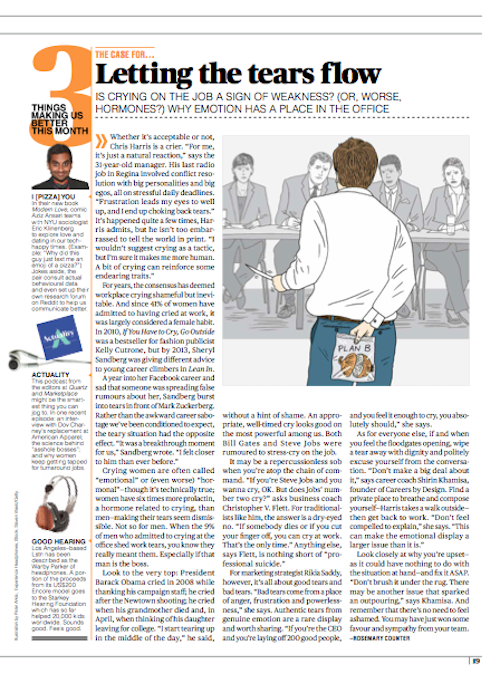