Don’t let a phobia ruin your weekend. Here’s how to tackle your fears

When I begin research for this piece, just typing the word “mouse” into Google invokes strong feelings of disgust. When pictures of mice appear on my computer screen, I recoil. And were a real mouse to scurry across my floorboards—I shudder at the mere thought of it—I’d screech and hop atop the tallest furniture around, palms sweating and heart pounding loudly in my chest.

This, for some, is a hilarious scene. A hysterical woman standing on a chair is excellent comedic fodder for a silent film; a terrified elephant cowering in the corner is a Disney staple. But it’s no fun for us phobics, and we’re at our very worst at the cottage—where snakes, bugs, bats, and mice could be lurking in any nook or corner. Shiver.

Though it often seems like it, I’m hardly alone. Studies show that about 10 per cent of us have phobias, which are defined by the American Psychiatric Association as “an abnormally fearful response to a danger that is imagined or is irrationally exaggerated.” Classified as anxiety disorders, phobias are loosely divided into three categories: agoraphobia, where the sufferer fears crowds and open spaces; social phobias, such as a dread of public speaking or using public washrooms; and specific phobias, the most prevalent type (and the one I’m unlucky enough to experience), which include fears of animals, insects, enclosed spaces, flying, or heights. While we all have fears, a fear becomes a phobia when it hinders your daily life—when it causes distress and minimizes choices. Feeling nervous on a balcony is a fear of heights; driving an extra hour to avoid a bridge is a phobia.

This may seem ridiculous to nonsufferers, who laugh and hide toy snakes in our beds and suggest we get over it. Although phobias are the most common mental illness among women and the second-most common among men, the stigma remains strong. In fact, some experts believe embarrassment conceals much higher numbers and explains the mysterious gender discrepancy: Socially, it’s much harder for a man to admit, for example, that he fears butterflies.

Phobias are not rational, and that’s the whole point. For instance, I know preferring a cottage run-in with a bear to a mouse encounter isn’t logical, but my reaction to the rodent nonetheless remains the same. “The mind signals the brain to release hormones that create certain phenomena in the body,” says Sam Klarreich, a psychologist and president of The Centre for Rational-Emotive Therapy in Toronto. “Then a number of things happen: the palms start to sweat, the stomach feels weird, and the patient experiences hot flashes, sweating, and nausea, and breathing and heart rate increase—all in a short period of time.”

In other words, a panic attack. To prevent this reaction, we steer clear of the situation at all costs with subtle avoidance behaviours that you norms don’t notice. I forgo my glasses at the cottage, for example, in hopes that a mouse out of sight will also be out of mind. Then there’s my spider-fearing friend, Tamara, who avoids the dock and one particular rocking chair (both spots where she has seen spiders). As well, she can only enter the basement during daylight hours—“it takes me, like, five days to do laundry”—and even once broke up with a man after getting a spider bite at his house. “I knew I couldn’t go back there,” she says, “so it was pretty much over.”

“But, ultimately, when we run from it, we reinforce our fear,” says Klarreich. No matter when the fear began—onset is usually in childhood but can come later, and is sometimes triggered by a traumatic interaction—each screeching, chair-jumping mouse escapade makes the next one even worse. Not to mention the anxiety over an impending mouse attack, which you are convinced is inevitable. Soon, fears begin to multiply and generalize, and before you know it, a skittering leaf evokes the same frantic reaction. (If you weren’t embarrassed before, you sure will be now.)

On edge is a terrible way to live, and no way to enjoy the cottage season, but there’s hope. “Phobias are the most treatable anxiety disorder—pretty much everyone is curable,” says Randi McCabe, a psychologist at St. Joseph’s Healthcare in Hamilton and author of Overcoming Animal & Insect Phobias. McCabe doesn’t recommend hypnosis (it’s unproven) or anti-anxiety drugs (they’re a band-aid solution), but says the best therapy is exactly what phobics fear most: exposure.

The process begins by creating a “stimulus hierarchy,” a series of interactions ordered from least to most anxiety-producing. For me, just writing the word “mouse” over and over again has already stripped it of its power (mouse, mouse, mouse!). The next step, suggests McCabe, might be simply looking at a picture of a mouse. “The more you surround yourself, in a gradual way, the more you’ll engage your fears and the less anxious you’ll be.”

Even debilitating phobias have been cured in as little as one treatment, but it’s more likely to be a slower process, depending on the degree of your fear and the speed at which you are willing to move up your list. But the more you understand your thoughts and reaction, the better you’ll be able to manage. “It’s not the mouse that’s doing you in,” says Klarreich, “it’s your thinking about the mouse.” Armed with that advice, and feeling slightly braver than before, I print out a picture of a mouse—albeit one playing a saxophone—and pack it in my bag to head north. 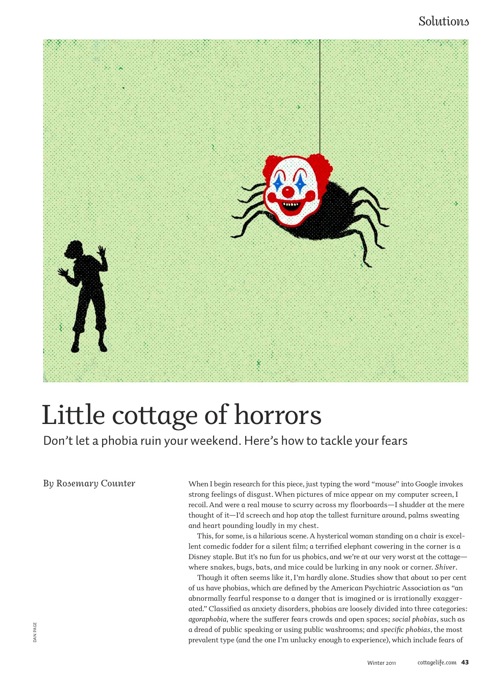 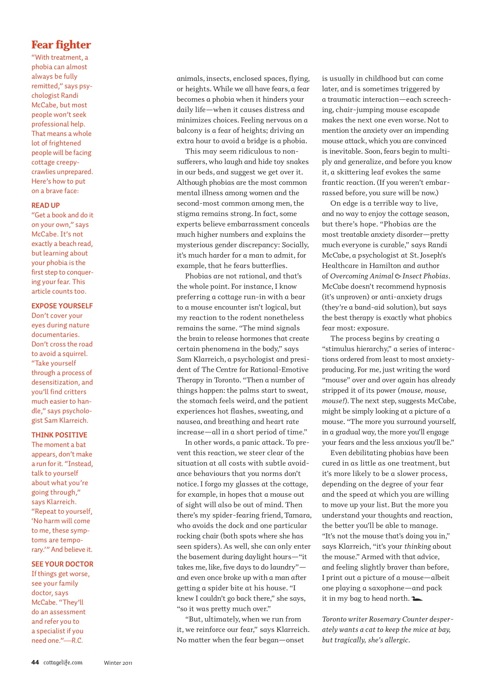