Five ideas for a family-friendly day trip or weekend away

As one of Canada’s most popular travel destinations, Niagara Falls needs no introduction: It’s a natural wonder, a honeymooner magnet and a family-friendly weekend getaway just a two-hour drive from Toronto.

Once you’re there, those looking for flashy attractions will find them aplenty on famous Clifton Hill — including scream-filled haunted houses, speeding go-karts, and dinosaur minigolf complete with a roaring, life-sized T-Rex — but there’s more to see beyond the main strip’s carnival-like scene. Here are just a few ideas for young and young-at-heart travellers alike.

Start your day gently alongside more than 2,000 butterflies from over 40 species at North America’s largest year-round butterfly conservatory, located within the Niagara Parks Botanical Gardens. Grab a complimentary scavenger-hunt book and a pencil, and then watch your step — seriously, to avoid squashing a fluttery friend — while admiring the shimmering blue morphos, yellow-striped zebra longwings and delicate rice paper butterflies. Many have travelled from as far as Costa Rica and the Philippines, packed carefully in cotton in their chrysalis stage, though 40 per cent of the gorgeous insects are hatched on site. Be patient by the glass emergence window, and you might get lucky enough to catch a butterfly come out from its pupa and take its very first flight.

Don’t skip the bird sanctuary just because you’ve already seen butterflies; despite superficial similarities, Bird Kingdom is half artifact-filled museum, half interactive “Indiana Jones”-esque adventure. Even the building tells a story: Originally a 1907 corset factory, it was repurposed as the Niagara Falls Museum in the ’50s, featuring the collection of curator Thomas Barnett. His collection, started in 1827, included all things unusual (like Egyptian mummies, one of which was the Royal Pharaoh Ramesses I — later rightfully returned to Egypt). In 2003, the world’s largest free-flying indoor aviary was added to the mix, laid out like a lost jungle kingdom for kids to wind through, alongside frogs and turtles and bats.

Niagara boasts the only remaining Canadian location of this jungle-themed chain — not that business shows any signs of slowing. Expect a line of diners waiting for a seat in the bumping restaurant, where hanging vines and metre-wide trees hide monkeys, leopards and giraffes that (mechanically) come to life. Kids sip on light-up drinks and parents on cocktails while waiting for the boisterous lighting storm, which arrives on the half-hour to excite animals and children alike.

For more than a century, to harness the falls for hydroelectricity, generators at this plant used steam-powered turbines, head gates and penstocks — you’ll learn about them all and Nikola Tesla, too. The plant closed in 2006, sat empty collecting ghosts for more than a decade, then reopened as a museum and tourist attraction to much fanfare last year. Kids can cruise ”artifact alley,” touch almost everything and (virtually) control the original switchboard. Also bringing the experience to life is “Currents,” a night show of laser lights and 3D interactive projections. There’s more to come this summer, too: Visitors will be able to venture 180 feet down via an underground glass elevator, hike 2,200 feet through a tunnel and arrive at the base of Niagara Falls.

Sneak in one last classic Niagara adventure with an aerial view of the city’s star attraction: the roaring waterfalls, of course, on both sides of the border. You can do this a few ways — from a helicopter, from brunch at the Skylon Tower’s revolving restaurant, or even from a zip line if you dare — but a calm ride on the SkyWheel, especially at dusk when the falls are illuminated with multicoloured lights, is arguably the best. Each of the 42 gondolas can carry a group of up to six 175 feet above the horizon for a bird’s-eye view of the falls, the surrounding cities and the sun setting over rowdy Clifton Hill beneath you. 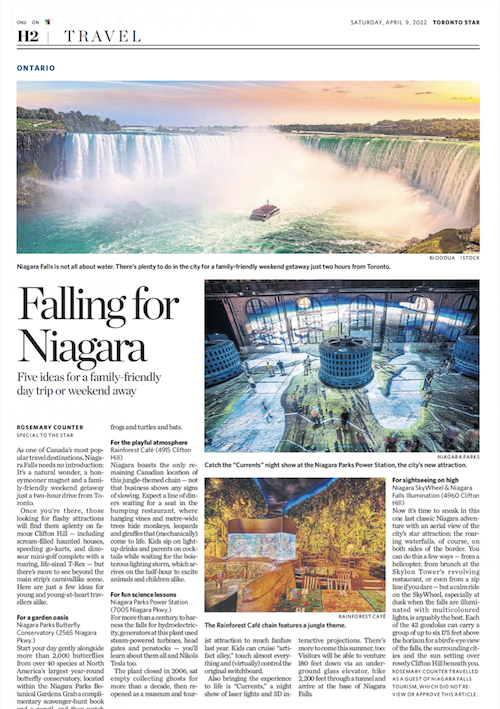