Leave that selfie stick at home

It’s ladies’ brunch hour at Hawksworth, a posh restaurant in downtown Vancouver, and seven of us sit at a long table filled with jam and pastries. Around us, a not-so-subtle photographer circles and lingers. “Try not to focus on the camera,” instructs Warren Fenton, adjusting his lens. Around him, the rest of the restaurant sneak nosy peeks: What’s happening? Who’s that? Are they famous?

No, we’re not, and I know for sure because although the paparazzi are indeed following us, we’ve actually hired them. Fenton’s here with digital marketing agency AntiSocial Media Solutions, and this is their new paparazzi photo session called “Roll.”

For two hours and $300, a professional photographer will follow you around to any event or excursion, capturing shots of you and your fabulous friends in action. Three days later — lightning-speed in business time, or slow-moving by social media standards — expect an email of well-lit, fully edited, downloadable photographs for your social media posting pleasure.

Sounds contrived, perhaps, but Roll actually happened quite naturally at AntiSocial, which helps companies ramp up their online presence. “Lots of clients had asked us to shoot more candid photos, so one day we decided to add it to our roster,” explains Daryl Louie, AntiSocial’s founder.

The new service will be open and flexible to almost anything — business trips, social events, outdoor activities, wild nights out — but Louie expects the majority of his clients will be visitors to the city (for both business and pleasure) seeking professional quality shots (for old-fashioned mementos and/or modern online humblebrags).

Vancouver might be the ideal spot for such a service to thrive; the picturesque city attracts travellers from all over the world, and many visit specifically for active adventure — biking around the Seawall, running marathons, hiking in Stanley Park, etc. — among scenery that amateur photographers don’t often capture, however hard and often they try.

“Lots of people want to focus on enjoying their time instead or spending it behind a camera,” says Fenton, one of six photographers at Anti-Social. “Or maybe they had a trip and weren’t satisfied with how their pics turned out.”

This, I understand. I’ve been both that annoying person always taking photos — and then hating them, deleting them, trying again, hating them even more — and that disappointed person whose vacation photos just don’t quite deliver upon return. For people like me, AntiSocial’s paparazzi session might solve both problems at once. It might even be the future of travel photography.

As such, there is competition. Just across the strait in Victoria, for example, is the upstart Flytographer. Like Roll, they offer photography for hire for a few hours of candid photos; unlike Roll, Flytographer doesn’t use the dreaded P-word. “We don’t ever use that word,” says Flytographer founder Nicole Smith. “Paparazzi are invasive and awkward. We’re the exact opposite of a paparazzi experience.”

In more than 170 countries and every continent but Antarctica, Flytographer connects travellers with local photographers. “They also unction as guides almost, as they’ll take you to the best coffee shop or some cool little alley with a mural that you probably wouldn’t discover on your own,” says Smith. Each and every one of her photographers must pass the “beer test,” i.e. be cool and friendly enough that you’d want to have a beer with them on your vacation, where time is precious. But it will be an expensive beer; Flytographer packages range from US$250 for a half-hour “Short Storyteller” to US$875 for a three- hour, three-location “Wanderlust.”

Liz Priestman went for the $350 one-hour “Subtle Chronicler” while in Paris with her mother and 10-year-old daughter. Her brother recommended the service, and at first, she was skeptical. “I didn’t want it to be like, ‘look at us, posing in front of the Eiffel Tower with our photographer,’” says Priestman, a Toronto-based entrepreneur.

But like many moms before her, Priestman had long become the go-to family photographer — and is therefore missing from the memories. “I have 1,000 pictures of my kids but none of me. It’s like I’ve been absent for 10 years.”

Priestman’s much-cherished Paris photo — three generations smooching in front of, you guessed it, the Eiffel Tower — now hangs on the wall and, of course, the batch made the social media cut too. “I’m sure there were some bad ones,” she says, “but I didn’t see them.” For the right price, pre-selected and edited photos are a blessing for the non-photogenic.

It all may sound a little over the top, but if hours of photo-taking on vacation feels torturous to you, you might be — contrary to what you may think — exactly right for a photography-for-hire service. “For people who hate having their photo taken, this can help put you at ease and forget your hangups,” says Smith. You can also satisfy the shutterbugs in the group and then get on with your day.

Hoping to link up with hotel guests, Flytographer has partnered with Fairmont while AntiSocial has paired with Vancouver’s Opus Hotel, as part of their new “Wild Weekend” package. Should you prefer your photographer follow you to the club, Lindsay Lohan-style, they most certainly would. Provided the club allows it, swanky photoshopped party pics are sure to make you the envy of all your Instagram friends.

Which is really the point here, though most all paps-for-hire will deny it. “There’s a lot more to this than just social media,” says Smith. “Lots of our customers aren’t even on Facebook.” Ditto over at AntiSocial: “It’s really about taking a break from social media, while getting that great photo for social media,” says Louie. “It’s ironic, I know.”

As for me back at the table, I’m trying my best to act natural, with minimal success. I really want to eat another croissant, but I know the camera is watching. “This is a very strange experience,” says my breakfast date through a forced smile.

In accordance, I decide to hide behind my sunglasses like Anna Wintour would. When they’re done, I’m relieved and grateful to feel normal again. But a few days later, when the photos arrive, I don’t hate them as much as I usually do. We all look relaxed, happy, a bit fabulous though not quite famous. I shamelessly press “share” just the same. 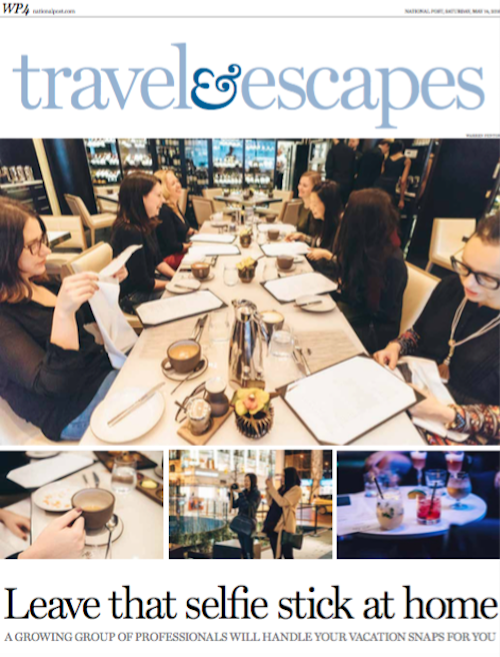 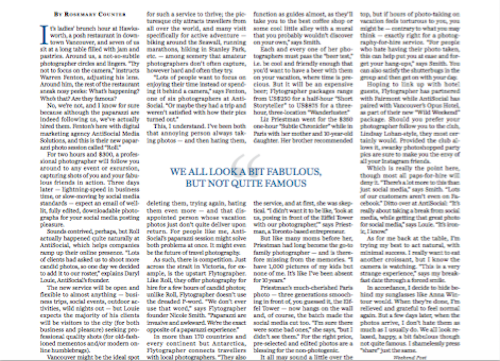