Whether grown or bought, universities are embracing local food

For those of us who remember campus cafeteria food—greasy burgers, potatoes of all forms—today’s menu at the University of British Columbia might surprise you. “We served baby-kale salad with romano beans, radish and broccoli slaw, all drizzled with a grapefruit vinaigrette,” says chef Steve Golob.

But his creation, 14 kg of which was gobbled up by hungry students, is more than just healthy—it’s both seasonal and local. Leading the shift from grub to gourmet are the students themselves. “They don’t just want it, they expect it,” says UBC’s purchasing manager, Victoria Wakefield. Specialty diets, including vegetarian, vegan and gluten-free, must be accommodated. Contributing to demand is a multicultural student body with wide and varied food preferences, as well as an increased interest in health.

To feed a growing market of consumers, three years ago UBC decided to go local. “We first adopted a definition of local food as raised, grown, processed or produced 240 km from campus,” says Wakefield. Grab-and-go oatmeal, once shipped in from the U.S., is now made in Nanaimo, B.C. Tofu is made in Victoria. Potatoes (still a student staple) are homegrown rather than imported from Washington. To date, 53 per cent of UBC’s food purchases meet the criteria.

Going local isn’t just good for students. An October survey from Farm to Cafeteria Canada, the first of its kind, found that, compared to public schools and health care facilities, college and university campuses had the largest food budgets and were significantly more likely to buy local. Ninety-two per cent of schools provided local food in some capacity, and 14 per cent had an official policy to address it. To generate revenue for the local food economy, “campuses are the way to go,” says Farm to Cafeteria manager Joanne Bays.

Bringing these campuses together is the work of a partnership between Ottawa-based Sierra Youth Organization and Toronto-based Meal Exchange, who joined in 2011 to form the Campus Food Systems Project. “Our mission is to build the student food movement and student leadership to bring local and sustainable foods to campuses,” says program coordinator Sarah Archibald. The initiative works broadly with 37 campuses—providing resources, webinars, blog posts and newsletters—and directly with student coordinators on 12 campuses. Memorial University, for example, recently partnered with a local fishery and celebrated with a fish fry.
University LIFE
The Campus Food Systems Project has also reached out to professors, who have proven equally enthusiastic. “We’ve had a biology course look at sustainable seafood, and an anthropology course look at the rise of food movements,” says project manager Caitlin Colson. “We’re learning that, at every level of the university, food means different things, but everyone’s reimagining what the food system can look like—not by outsourcing it, but by creating it.”

Which is exactly what Guelph University did when, while renovating Creelman Hall last year, it decided to re-vamp its food model. Already known for its strong agricultural connections, Guelph built a new menu around ingredients grown or processed nearby. The 100 Mile Grille opened in 2012. A generous government grant paid for the construction of a produce-processing facility. “Now we can buy a lot of produce during harvest season, wash it and freeze it to store away for winter,” says purchase coordinator Mark Kenny.

The result is a menu of traditional comfort foods with a local gourmet twist. “My favourite meal is the Niagara peach salsa and smoked mozzarella cheeseburger,” he says. Still, for today’s health-conscious and environmentally savvy student body, some things never change. “Every year I’m surprised by the uptake of poutine,” says Wakefield. “But at least now the potatoes aren’t frozen and nasty; they’re fresh and local.” 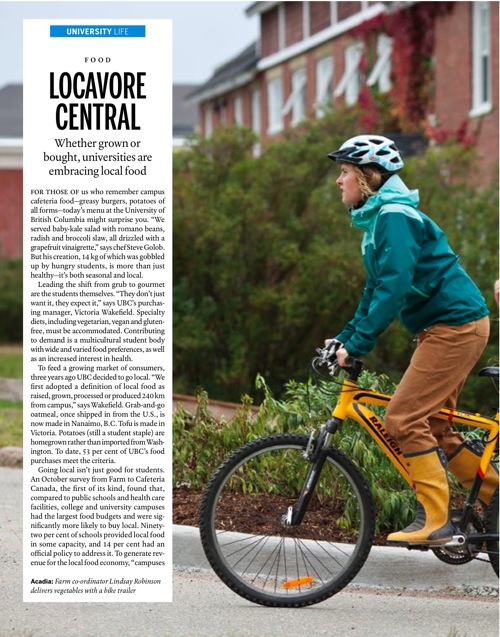 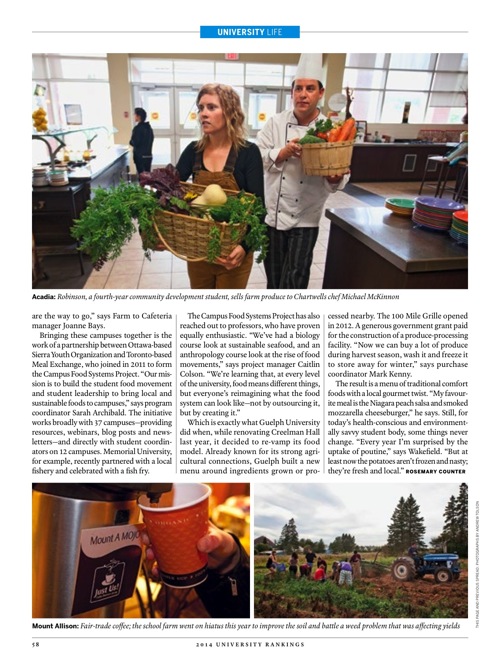 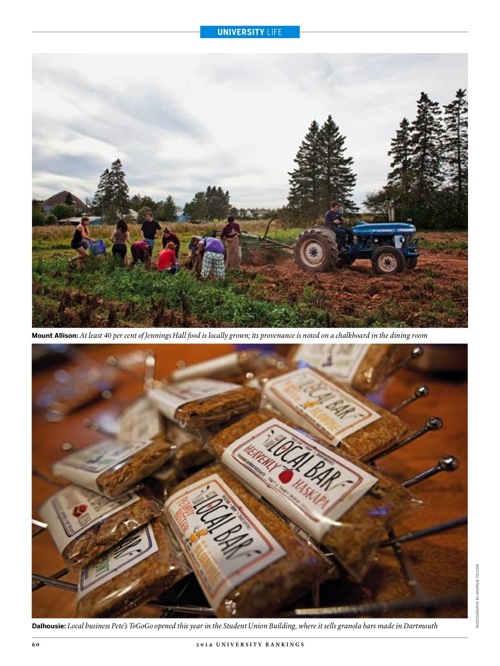