The Jeopardy! host’s style has to complement his on-screen persona: knowledgeable but accessible, conservative but not snooty, smarter than you but not smug about it

It’s hard to imagine, but suave-suited Alex Trebek—arguably history’s greatest game-show host on probably the world’s all-time favorite game show Jeopardy!—arrives to the set looking nothing at all like his iconic persona.

“He generally comes in jeans and a T-shirt, driving a pickup,” says Phil Wayne, Trebek’s stylist. “It’s my job to transform him into the elegant host you see on TV every night.”

Since 2008, Wayne, a 40-year veteran of television costuming with stints at General Hospital and Passions plus an Emmy nomination, commutes twice a week to Sony Pictures Studios in Culver City, California, to power-film 10 episodes of the game show. He arrives early to choose from a closet of 50 suits—some older than his tenure, yes, but not many—to arrange five suit-shirt-tie combos for the day, which Trebek (mostly) wears without question.

“Alex has never said, ‘I won’t wear that shirt,’” says Wayne. “He trusts me to pick the look.”

The look, says Wayne, is “simple, elegant, and classic. It’s not about trends or high fashion.” This look is easy to imagine: Trebek, in a crisp, dark suit and thick mustache, carrying the show, day in and day out, for more than 30 long years. Every day he’s invited into the homes of 11 million viewers, and he must always both look and act the part: knowledgeable but accessible, conservative but not snooty, smarter than you but not smug about it. When it comes to intelligence-measuring trivia games, says Wayne, “a stuffier host might ruin the show.”

Satisfying viewers is paramount to any show, but Jeopardy fans in particular are a finicky and contradictory bunch: Trebek must look current, and the episode must always feel new but also somehow exactly like Alex-from-the-past in a rerun from 1990. Familiarity and consistency are key, but Trebek can’t always wear the same suit, Matlock-style. And not unlike Matlock, the average age of Jeopardy viewers has now crept up past 64. Trebek must appease die-hard fans who loathe change (remember the uproar when he shaved his mustache?) while simultaneously attracting new viewers (who, last season, overwhelmingly voted for the aforementioned shave).

Unlike the “trimmer, more European look” of Pat Sajak, who’s also dressed by Wayne and often seen in beiges and grays and even short sleeves or Hawaiian shirts during theme shows, Trebek’s “far more conservative look” reflects the upscale ’tude of Jeopardy snobs. (Can you even imagine Trebek rocking a Hawaiian shirt? “You never know,” teases Wayne.)

Close viewers know we do get brief glimpses of outside-the-studio Trebek—during rare pre-taped video clues. “Sometimes when he’s reading clues from different parts of the world, we’ll pop in a sweater or something much more casual,” says Wayne. This might be the closest we’ll get to “jeans and T-shirt” Alex—lots of these outfits are plucked from Trebek’s own closet.

Back in the studio—Wayne’s domain—you’ll likely find Trebek in some version of his unofficial uniform. “To me, Alex looks best in a rich, dark suit,” says Wayne. The current favorite is a brand new Armani, but Trebek’s also got a couple of Guccis and a Dolce & Gabbana topping Wayne’s lists of 2015 front-runners. Blacks and dark blues are always winners, though browns were vetoed and tossed when Wayne took his post and sought to put his own signature style on the much-loved host. “The last couple years, I’ve really pushed for bolder, brighter ties,” says Wayne. His go-tos are magenta, vibrant blues, and golds.

Like many men before him, ties are where 75-year-old Trebek can get creative, or even festive. “I watch dates very carefully,” explains Wayne. “If it’s Christmas, I’ll make sure he’s in red, and if it’s Saint Patrick’s Day, he needs to be in green.” He’ll also save the fun ones for Kids’ Week and the chicest for the Tournament of Champions. It’s subtle, yes, and many people will never notice, but for daily viewers who never miss a show Trebek’s always tweaked and timed to fit into the viewer’s life—not vice versa.

Fans notice, and they aren’t shy about it either. “We just got a letter recently from a fan who loved a tie so much she wanted to get it for her husband,” says Wayne. Trebek loves and appreciates feedback, he says, and pays it forward when he can. “Just this past taping, he brought in a tie that someone had mailed from Canada and asked if we could work it into the show.” (That lucky letter writer had a Christmas show surprise last week.)

Against conventional fashion rules, Wayne is quick to pair bold patterns with more patterns—not the usual solids. “Alex likes shirts with stripes and patterns, and he loves a little check.” Small tone-on-tone details aren’t quite visible on TV, even following Jeopardy’s shift to high-def cameras in 2006, but they do add texture and visual depth that pleases viewers’ eyes without them even noticing. Conversely, lots of garments were axed with the new cameras. “A lot of the patterns didn’t work when we went to high-def. They jump around.”

Also on the chopping block were pocket squares, once a favorite of Trebek but long since phased out. “They’re kind of back in style with younger guys, but Alex wears them the old-fashioned way.” Every so often, Trebek will want to throw one back into the mix. “I’m happy to accommodate,” he says.

And even though Trebek trusts his ever-accommodating stylist, he’s been known to go rogue. “Sometimes he’ll go shopping on his own and come in with a bunch of new suits,” says Wayne, who’ll then have them altered and worked into the rotation. “Alex likes to support local businesses and he doesn’t just want to go to the highest-end stores. And he really likes a sale.” What kind of world-famous television icon haggles for a deal then hops in his pickup? Who is Alex Trebek, that’s who. 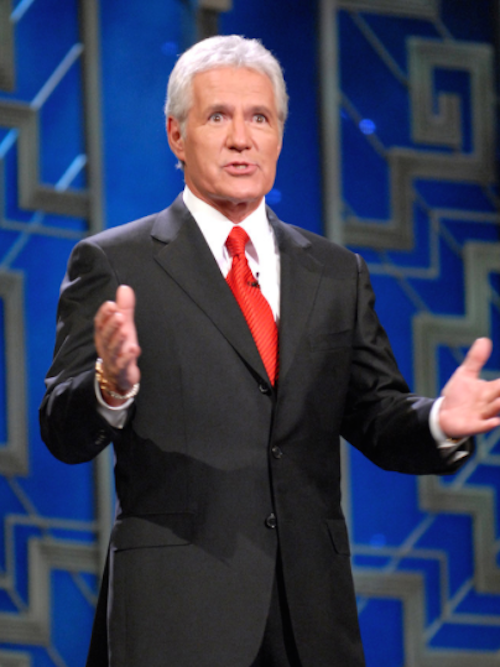