Drugged out and behind big sunglasses, I dragged myself to yoga class. “I have a migraine,” I gloomily told the teacher, vaguely describing my symptoms in hopes that she’d know which poses might help and which ones to avoid. But there was no sympathy to be had. “That just sounds like a regular headache to me,” she said.

Ugh, I thought as I bit my lip, but I can’t blame her; I, too, spent a long time downplaying, dismissing and denying my migraines. “They’re not that bad,” I said when my doctor first used the M-word – a position I maintained for two more painful years. I even offered up a list of preferable alternatives: “Maybe it’s my sinuses?” (It’s been proven, by the way, that up to 90 percent of self-diagnosed sinus headaches are migraines in disguise.)

The whole truth is, when I heard the word “migraine,” I had a very clear image in mind: mostly, the worst pain humanly possible (far worse than whatever subpar pain I had), plus auras, blurred vision and vomiting. If I really had migraines, I’d be curled up in a ball, writhing and praying for death. This was absolutely not me, thank you very much – I am lively, happy and mostly healthy. Like many, migraine’s PR problem had gotten to me.

“There is a misconception surrounding migraine and a lack of understanding about the degree of suffering for migraineurs,” says Dr. Christine Lay, a neurologist and director of the Centre for Headache at Women’s College Hospital. “It’s much more than ‘just a headache.’”

For obvious reasons, numbers are elusive, but let’s crunch some anyway: Experts estimate that about 20 percent of the general population is genetically predisposed to migraines – that’s about 7.2 million people. Dr. Lay estimates that there could be as many as five million migraineurs in Canada, yet self-reported Statistics Canada reports say that just 2.7 million of us have an official diagnosis – meaning over half of migraineurs could be unaware of what they’re experiencing. For an affliction that is supposedly recognizable, these numbers reveal a fascinating and confusing discrepancy.

The problem, says Dr. Lay, is multi-faceted, beginning with the doctors and patients themselves. “Up until recent years,” she says, “migraines were either taught superficially or not at all.” Yet, like dental cavities, they seem to be a pretty common ailment. According to Statistics Canada, about 14 percent of the world’s population has experienced a migraine, and studies consistently show that women are more likely to experience them than men. The result? Like my yoga teacher, a universal Oh-I-know-what-that’s-like, take-a-Tylenol mentality.

Complicating matters is how to diagnose migraines since symptoms can vary. For instance, the much-hyped visual aura is experienced by just 15 percent of sufferers, and only about 20 percent experience vomiting.

Even if you did have a textbook migraine, you aren’t guaranteed a speedy diagnosis. Take Sylvia Scherrelies, a 30-year-old nurse in Victoria, BC, who has had headaches as long as she can remember: “I have early memories of my mom teaching me how to swallow Advil as a very young child,” she says. They worsened throughout her teen years and 20s into classic migraines with nausea, vomiting, one-sided pain and light-sound sensitivities.

Still, Scherrelies faced decades of dismissive doctors. “My family doctor was an older man who never even used the word migraine,” she says. “He said they were just headaches, very normal, and suggested Advil.” As a preteen in the late ’90s, with the Internet more widely available, Scherrelies began doing her own research and self-diagnosed. She was ignored by doctors for a few more years (sometimes she was given a T3 prescription and sent home, while other times doctors would sug- gest Advil) until she was referred to a neurologist and eventually diagnosed at age 20.

Scherrelies and I are both migraine sufferers but with very different trajectories. There are many, many more, says Dr. Elizabeth Leroux, director of the Headache and Migraine Clinic at the University of Montreal’s Health Centre. “When you first tell your doctor, you can be either recognized or denied, and it will make a big difference on the quality of your life,” she says. The fact that a doctor might not consider migraines “real” or “important” or write you one prescription and send you on your way is a risk no patient should have to take. “It’s just completely unacceptable that such a common, treatable disease with such wide impact depends on luck for a diagnosis,” she says. Dr. Leroux’s book, Migraines: More Than a Headache, is challenging these lingering notions that often leave migraine sufferers alone with their pain.

These stereotypes die hard, as we’ve embraced them for decades. “Migraine has been known since 3000 BCE, but it’s only in the past several decades that science has been advanced, leading to a better understanding of – and treatments for – migraine.” says Dr. Lay. Three times as many women have migraines as men, likely due to hormones – more specifically, estrogen in women of child-bearing age – making this a woman’s problem that was easily dismissed in a male-dominated medical field. “Migraines have long been an invisible disease of depressed and anxious women,” says Dr. Leroux. “It’s seen as the disease of complaining women who don’t want to have sex. Remember the old joke ‘Not tonight, honey. I have a headache’? That’s migraine.”

And just like that, you’ve got stigma. Consider calling in sick with the flu (definitely don’t come in!) compared to calling in sick with a headache (insert employer eye rolling here). Scherrelies learned this the hard way: After too many sick days (she has a migraine 24 hours a day, seven days a week, that never disappears – the pain level just varies), she was put on long-term disability last year. After losing her ability to work and dealing with chronic pain, depression soon followed. She is still seeking migraine relief, but doctors constantly ask about her mental health rather than her physical condition. “I tell them over and over that the depression is caused by the migraines, not the other way around,” she says.

Like almost every other disease, migraine isn’t a one-size-fits-all experience but a spectrum with a thousand variations in between. “On one end, you have someone completely crippled by the condition who can’t function,” says Dr. Leroux. “On the other end, you have someone who gets two moderate migraines a year – and maybe they don’t want to associate themselves with the first person.” Though I hate to admit it, that’s exactly why I refused a diagnosis that I was lucky to get in the first place. Without knowing migraine even had a stigma, I was unknowingly contributing to it.

Chronic pain isn’t an uplifting story; it’s a daily, ongoing trudge of avoiding triggers and monitoring symptoms. As such, there aren’t any flashy celebrity spokespersons associated with it. “We could really use a famous person saying ‘I have chronic pain from migraines and I got help,’” says Dr. Leroux. (Remember that celebrities with migraines face stigma, too, and for performers who are expected to be on stage, “coming out” as a migraine sufferer can cost them gigs.) But just for fun, know that Julius Caesar, Thomas Jefferson, Napoleon, Vincent van Gogh, Virginia Woolf, Sigmund Freud, Elizabeth Taylor and Elvis Presley all got migraines and became legends just the same, according to the National Migraine Association. The organization is working hard to raise awareness and combat stigma.

The upside is, though women are far more likely to get migraines, they’re also far more likely to seek help. Dr. Lay suggests that you start with a headache diary, tracking not only your headaches but also your menstrual cycle, diet, sleep and even the weather. “Arrive to your doctor with all the evidence you need to discuss it thoroughly,” she says, “and don’t let your headaches be brushed off as ‘regular.’” Anything recurring isn’t “normal,” says Dr. Lay. (If your doctor disagrees, consider finding a new doctor.)

“I tell my patients to recognize but not dramatize,” says Dr. Leroux. This isn’t easy when you’re on day five of a 10-out-of-10 pain-level migraine, but skipping the drama and panic will help you move out of self-pity and frustration and toward real help. “You first need legitimate recognition that migraine is a terrible but treatable condition,” says Dr. Leroux. “Then you can get to work on a tailored treatment so that you can cope better and have a good life.” Both are very possible, with the right doctor and diagnosis, for migraine sufferers at every spot on the spectrum. 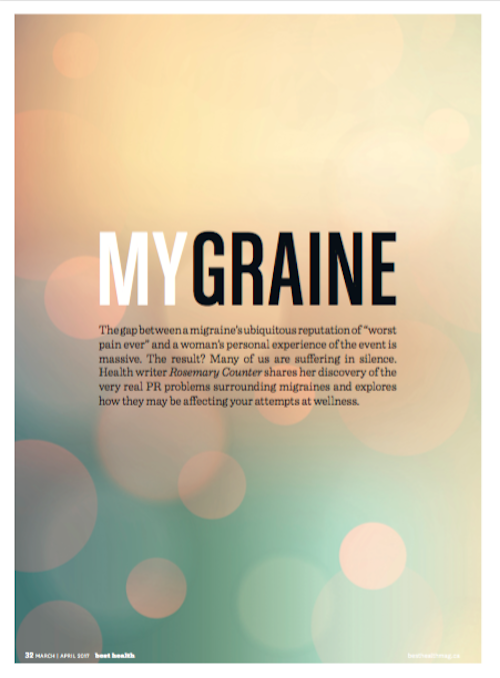 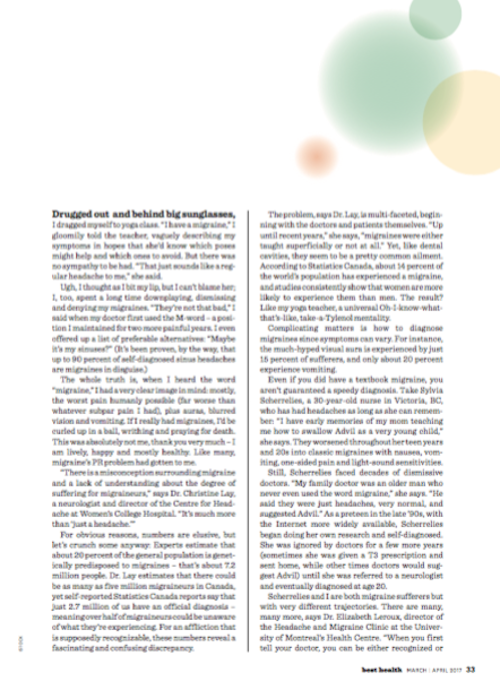 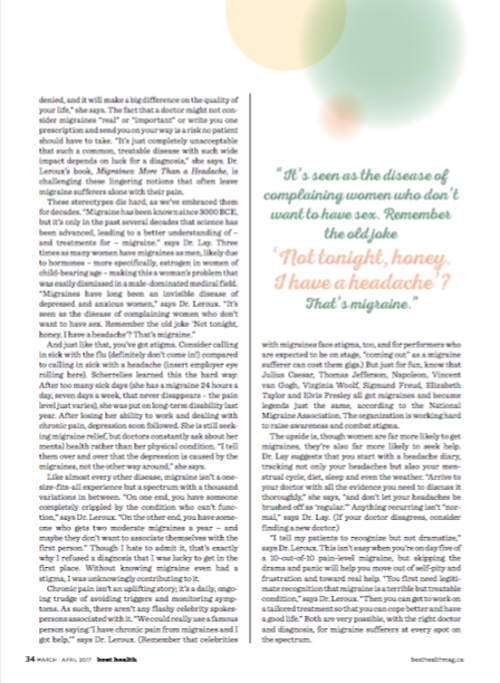