My summer of lobster

The iconic seafood has taken turns through history as a staple of both high cuisine and low.

I may be alone here, but I actually have fond memories of the McLobster. It was 1991, perhaps, and my whole family — two parents, three brothers and me — are squeezed into a blue Aerostar. We’re on an annual family road trip, this time to the East Coast, and Roger Whittaker plays on a loop. I’m eight-ish, prone to carsickness and boredom, but if we all behave for once, there is a rare and much-anticipated trip to McDonald’s in our future. More specifically, there is the fast-food chain’s newest menu addition: the McLobster.

The memory ends right there, however, and today I have nothing but questions: Is the McLobster really as good-behaviour-worthy delicious as I remember? If so, after its much hyped early-’90s debut, why did the McLobster disappear into lore and obscurity? And how is fast-food lobster — a confusing oxymoronic combo if there ever was one — possibly back on takeout trays? And how long can the madness last?

Like the seafood equivalent of a song of the summer, lobsters suddenly seem everywhere. It’s lobster hour while supplies last at McDonald’s, as part its “Great Canadian Taste Adventure” — the first time that sandwich has graced the chain’s counters nationally since sticking its toe into the Ontario market in 2013 (to less-than-steller reviews). Subway’s lobster offering, imported to Canada last year, can’t be missed in their stores now, where big posters herald “the Atlantic Canada lobster sub is back.” The lobster frenzy is not restricted to strictly fast food — the Keg, for its part, is celebrating its annual “Lobster Summer.”

The result: Lobsters are crawling out of fine dining establishments and into fast-food joints on every corner, served in convenient “roll” form. The recipe is simple: lobster chucks plus mayonnaise plus lemon, wrapped in a buttery bun, conveniently wrapped to go. It’s not a bad comeback for “the cockroach of the sea” once reserved for the poor and the imprisoned.

Just a century and a half ago, lobster — from the Old English loppestre, meaning “spider” — was considered a disgusting bottom feeder. It was sold in cans, not unlike Spam, for 11 cents a pound (baked beans went for 53 cents), and doubled as cat food. It was a basic supply-and-demand scenario: lobster along Boston’s seashore was so plentiful you could capture them by hand, and storms brought so many of the arthropods ashore that they’d be ground into fertilizer.

But lobster’s fortune changed as railways spread across North America. By the turn of the century, mid-land passengers, who were blissfully unaware of its awful reputation, were served the creature as an exotic new delicacy. Lobster was easily obtained en route and plentiful, plus chefs discovered the public would gobble it up with a side of melted butter.

Everyone had a taste during the Depression and Second World War, when lobster prices fell with all the rest and, since lobster wasn’t rationed during the war like beef and pork, it became an easy way to get your protein. By the 1950s, lobster prices up again, Hollywood and the Rockefellers were serving it at society parties, and the nouveau riche at home followed suit. Lobster proved the ultimate social climber.

Back in this century, conditions were set for a resurgence again in 2012, when, without explanation, and with fewer traps in the ocean, the lobster harvest jumped from 104 to 127 million pounds. Fishermen suspect the food chain’s outta whack — predator fish such as cod, pollock and haddock having their populations slashed by overfishing. Scientists also point to climate change, which warmed waters, triggering early lobster growth.

Whatever the causes, dockside lobster prices plummeted to $2.77 a pound — the lowest since 1939. Cue a few seasons of lobster poutine, tacos and grilled cheeses. Prices have since risen; a fresh 2015 lobster from Atlantic Canada now costs about $5 a pound — and climbing — so their foray onto fast food menus may not be destined to last. I must test my inner child’s memory of McLobster now, or perhaps never.

Or maybe I’ll work up to it. With an open mind and a cautious stomach, I start at Subway, where a $14 sandwich can make even the most optimistic lobster lover skeptical. “You’re really getting that?” asks the woman behind me, her face a mixed salad of confusion and curiosity. Fast-food lobster is a foreign concept for many of us, and more traditional ways of imbibing run deep. And while Subway maintains its lobster is popular in Atlantic Canada, here in-land, even my sandwich artist isn’t convinced of his work, suggesting I lather my minuscule lobster portion with a healthy squirt of sub sauce. I agree, but it does not help.

At McDonald’s, a lineup of patrons curves around the soda fountain and out the door, but the McLobster is not a popular order. “We got any lobster left in the back?” calls the woman at the counter, an ominous sign if I’ve ever heard one. It’s a bit of a hunt, but for just $7.49 — or make that a meal for $9 — the roll is mine.

“I thought it would look more like it was squeezed from a tube,” says my friend Jessica, a new mom who rightfully deserves home-cooked lasagna from me, but is politely letting the Mickie Dee’s slide. “It doesn’t look bad,” she says, semi-confidently. We take two big bites and are equal parts surprised and relieved; though Twitter was distinctly #notlovinit, my McLobster is neither delicious nor, as some called it, “McNasty.” I give this takeout lobster one enthusiastic thumb up and one childish thumb down.

It does demand a crustaceous palate cleanser, however, so I seek out Market Street Catch across from Toronto’s St. Lawrence Market. Here, I eat the only truly satisfying roll of my lobster adventure ($17). It’s a cold, calorie-laden truth, served on a heaping salad with balsamic vinaigrette. It is fresh and scrumptious and I want two more as I sit barefoot down by the pier. This is how lobster should be, but it’s not fast food. 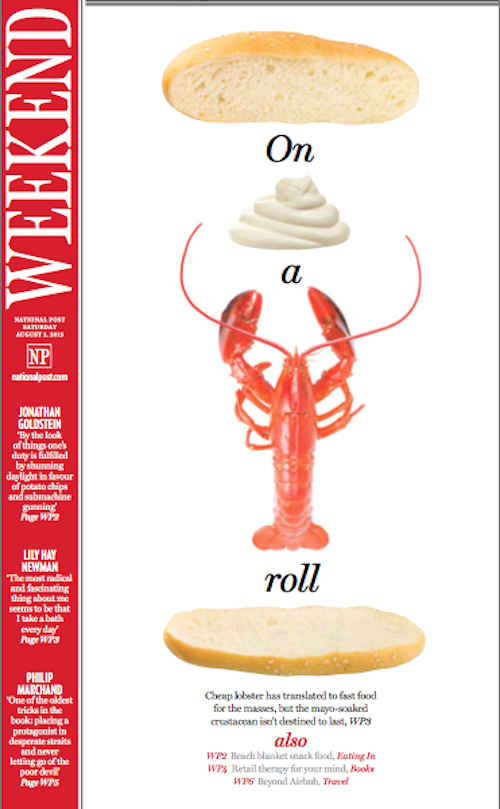 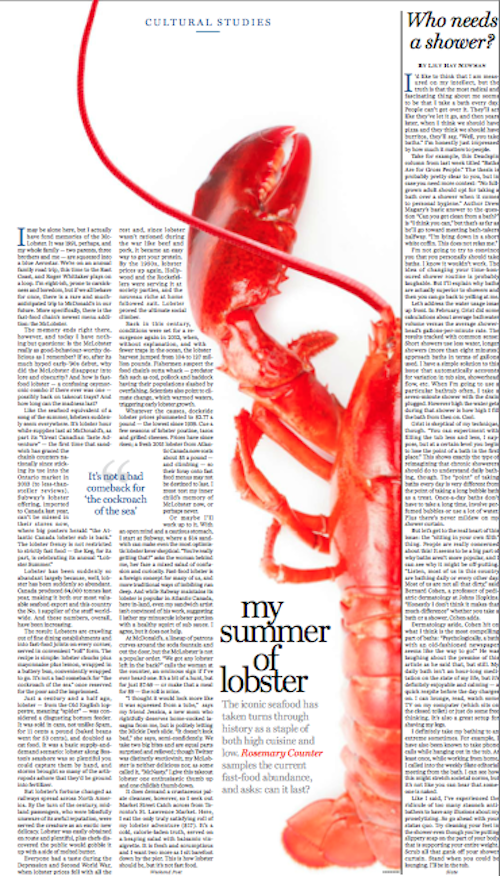