Your roommate in first-year residence could be your polar opposite in personality.

A decade ago, which might as well be a century in technology years, Michelle Titus was like many first-year university students: away from home, stuck in a “teeny tiny, horrible” room, and living with a complete stranger she couldn’t stand.

In her defence, it was a bad match from the start. Titus was popular and outgoing, the soon-to-be relationship columnist at the University of Waterloo’s student paper. Her roommate was an introvert who’d wishfully described herself on her application as a “social butterfly.” “On paper, we should have been the best of friends,” says Titus, now 30. In real life, following some drama worthy of Mean Girls, they were estranged by the end of the year.

But that was using the old questionnaire model, which is increasingly unreliable when matching university students in residence. “I like to think people answer honestly,” explains Kati Kilfoil, assistant director of residence life at Saint Mary’s University in Halifax, “but 19 years of experience tells me that the person who shows up on the first day isn’t always the person on paper. People imagine who they’d like to be, not who they actually are.”

There is also a problem with nosy helicopter parents overseeing the application process. “We do ask questions—Are you a night owl? Do you drink alcohol?—but when students don’t fill out the applications on their own, they sometimes don’t answer truthfully,” says Cate Morrison, residence life manager at the University of British Columbia.

Because the forms aren’t helpful, many universities take a hands-off approach, inquiring about age, gender, academic year and little else. Haylee Drew, 19, a freshman studying sports management at Brock University, could have had a room to herself, but decided she wanted a roommate for the full university experience. Other than checking off that box, the matching “was just random.” The roommates-to-be connected on Facebook first, where “all her pictures were so emo it was making me nervous,” she says.

On move-in day, Drew discovered her roomie was a sheltered only child who clung to her. “She was like my little puppy; wherever I went, she’d ask if she could come, too,” says Drew.

Part of the problem, says UBC’s residence life manager, is the media’s portrayal of roommates as inseparable friends forever. “There’s a false sense that you’re going to be besties as soon as you get here,” Morrison says. Women are especially susceptible, she adds. “Females prefer, and sometimes expect, to be really good friends. Men seem more okay just doing their own thing.”

A greater influence than gender, however, may be Generation Y itself, according to Kilfoil at Saint Mary’s University. “The millennials have grown up in large, private spaces, whereas our residences were all built 40 years ago when the family dynamic had most people sharing rooms.” At the same time, there are now culture clashes to deal with when your roommate turns out to be from another country, which is increasingly common. “Over a third of our students are international now, so there’s a very good chance that every room will have a student from another country,” Kilfoil says. At UBC, Morrison recalls a particularly awkward culture clash where one student wanted her boyfriend to sleep over, but the other roommate’s religion did not permit her to sleep in the same room as a man. In the end they agreed on a compromise: the religious roomie bunked with a female friend when the boyfriend visited.

There is also a decreased level of interpersonal skills in an age when social media make it easy for students to chat with their parents or friends at home about their roommate issues, “but somehow they can’t communicate with the person who sleeps three feet from them,” says Kilfoil.

Which is exactly how it happened with Haylee Drew and her roommate. “I know she didn’t have any friends, and I didn’t to be mean. So I’d just sneak away,” she says. Eventually, fed up, Drew and another girl unofficially switched rooms without telling anybody.

A room change, however tempting, is considered a worst-case scenario. To prevent them, a gamut of roommate resources—from carefully selected pairings to formal mediation services—are available at most schools. “We focus on working on problems rather than taking the easy way out,” says Morrison, who’s relocated just three students this year. But that’s not to say everyone else is getting along just fine—Kilfoil estimates a full 20 per cent of the thousand students in her residence never want to see each other again after first year.

It could be the old roommate system just doesn’t work anymore, and as such, Saint Mary’s is on the cusp of a change. While slowly converting double rooms into singles, they’re making an every bigger concession to the new cohort: “We’re about to roll out an online application where students can view another student’s profile and select their own roommates.”

The University of Toronto developed and launched a similar service, Roommate Finder, for off-campus students in 2010. “It’s similar to Facebook in that they can showcase themselves and their interests, only with much higher security standards,” says Jennifer Radley, manager of the housing service. “We provide avatars, so you don’t need to upload pictures, and an internal inbox system so that they can message each other without actually providing personal email addresses.”

Also on Roommate Finder are a series of questions much more intimate and detailed than your traditional residence application, she says. “For example, do you pay the bills as soon as they come in or do you wait a month? Do you do your dishes right after you finish eating or do you wait until they have mould on them? Are you open to sharing things or should your roommate always ask first?”

Roommate issues have stayed largely the same over the years. Schedules, cleanliness, noise and overnight guests top the complaints list, and most schools train their residence assistants to help resolve these conflicts. But for anyone seeking professional intervention, roommate counselling is available.

Alyson Mischel, a psychotherapist and life coach in Los Angeles, was teaching life-skills classes to sororities and fraternities when she began focusing on roommate relationships in 2008. “There are all kinds of alternative-relationship counselling—friends, writing partners—so it’s completely natural that therapy is extending to living partners,” she says.

Mischel’s best advice almost feels too easy: “Set up guidelines at the very beginning. I’m a proponent of making an actual business plan, with all the variants laid out,” she says.

Roommate pre-nups may seem extreme, but they’re already popping up on campuses across the country. At the University of Victoria, residence life coordinator Karla Carreras says they call them roommate agreements, “and we’re looking at making them a mandatory part of the community.”

Residents in each apartment-style dorm (four bedrooms with everything else common space) are encouraged to discuss and agree on house rules. Chores, noise and when lights go on or off are included. It is not intended to be a legally binding document, but if students break the rules in their mandatory residence contract they can be kicked out.

“We run into problems when the students are already friends and so ignore the roommate agreement. In two months, the honeymoon period wears off and they haven’t had that discussion they should have,” says Carreras.

For the Net generation, despite all their innovations, a basic model of respect and communication may work best when it comes to getting along with your roommate. And if not, good news: much like your iPhone, by next season you’ll probably have a new one anyway. 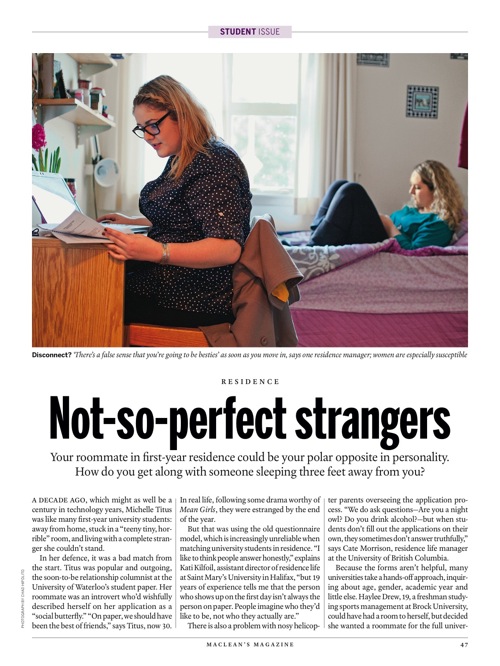 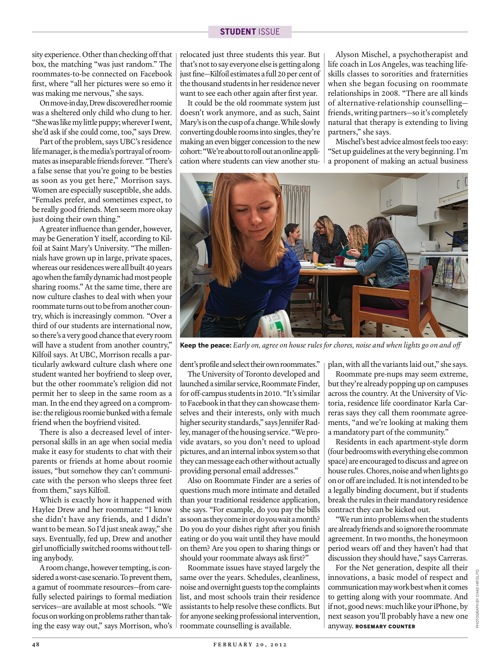