Groceries, takeout, music, movies, taxis and almost everything else can now be summoned to your doorstep on demand. And yet, you’re still expected to bundle up and wait on a street corner for the bus. What if it’s the middle of the night? What if you need to change buses—once, twice or more—to get to work? Wouldn’t you rather buy a car instead?

Public transit almost everywhere has big problems with access and convenience. And the pandemic upped the stakes: The only thing worse than an empty bus that takes an extra hour to complete its route because it still waits at every single stop is an overfilled one where masked travellers cannot possibly maintain a healthy physical distance.

But Remi Desa wants to end the struggle. After years in the transportation and logistics sector—ensuring deliveries moved and arrived as efficiently as possible—the Toronto-based entrepreneur thought outside the box. Literally. “I started to think about moving people instead of packages,” says the CEO and co-founder of Pantonium. It’s not quite the same, he jokes. “A person isn’t going to sit happily for four hours even if it is the most efficient route.”

Public transit, he posited, needs to modernize like everything else. “On-demand technology has been around for some time now, but certain industries haven’t adopted it,” he says, citing funding, politics and never-ending red tape as major hurdles that impede progress. Century-old transport models, user apathy and pragmatic necessity exacerbate all of the above.

“We’re trying to reimagine mobility so buses can run on demand like so much else,” says Desa. “We want to be more accessible to the riders, and also more flexible and productive for the drivers.” Pantonium Macrotransit could be the software platform to connect riders and rides to streamline trips. If his theory worked, that is. So to find out, Desa’s team ran a test in Belleville, Ont., on its single (and notoriously inefficient) evening route.

“Our nighttime service has to cover a big area, and our ridership was on the low side,” says Paul Buck, Belleville’s manager of transit services. “We needed something that would service more people and not drive around empty all night.” Desa’s plan was comfortably familiar with a modern twist. “It took me back to Dial-a-Bus,” Buck says, recalling GO Transit’s failed mid-’70s experiment. “This is exactly what we were looking for, except the technology didn’t exist.”

Rather than using a set schedule that riders can either make work or not, Pantonium Macrotransit used AI software (and an old-fashioned phone-in option) to ask the people of Belleville where they needed to go and when. “Our system then co-ordinates all the buses across the city according to demand. Basically, we’re adjusting the routes and schedule in real time on real people’s schedules,” says Desa.

The project wasn’t just successful but surprisingly so: The area that was serviced increased by 429%, yet vehicle mileage decreased by 30%. Accommodating just 30 riders per hour equated to a 300% increase in usage. The surveyed riders were mostly young, low-income and carless, and more than 70% reported on-demand transit made their commutes more convenient.

Since the pilot project fared so well, Belleville went all in on Desa and Pantonium Macrotransit when COVID-19 hit in March 2020 and ridership plummeted. “Our ridership dropped more than 90% overnight, so it was a very simple decision to make,” says Buck. Within three days, the city of 50,000 moved its entire transit service—seven days a week, 24 hours a day—to an on-demand model.

Slowly but surely, other cities are considering a better way of taking the bus. The on-demand service in Chatham, Ont., manages to serve the whole city with two buses rather than five; Stratford, Ont., has done twice as well by replacing 10 buses with just a pair. Pantonium also found success south of the border in Rogers, Ark., where ridership grew 44% and ride time fell by 30%. In these and eight other cities, Pantonium’s technology has increased access to jobs and schools, reduced fuel consumption and traffic congestion, and decreased carbon emissions. Riders, meanwhile, save nearly $10,000 annually by using transit instead of cars.

And yet, despite all its promise, Pantonium Macrotransit faces a familiar problem: The bigger the city, the slower the bureaucracy moves to reward innovation. “Public transit has a large political aspect. Everything needs to go through council, and change takes time,” says Desa. Thanks to him and his forward-thinking colleagues at Pantonium, however, ordering a bus to your doorstep from your iPhone is closer than ever before. 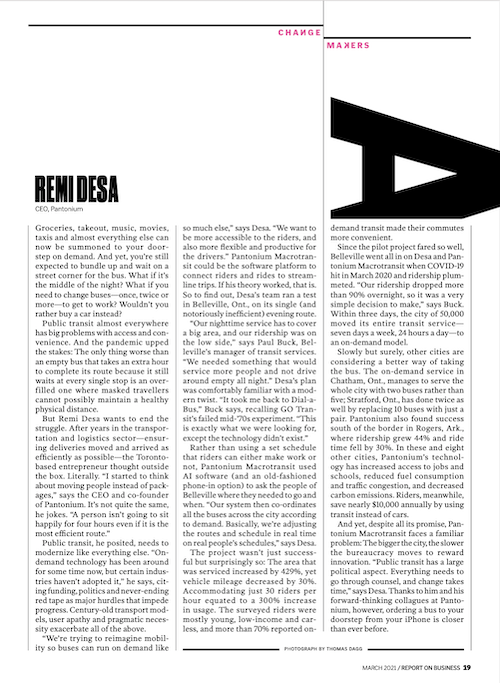 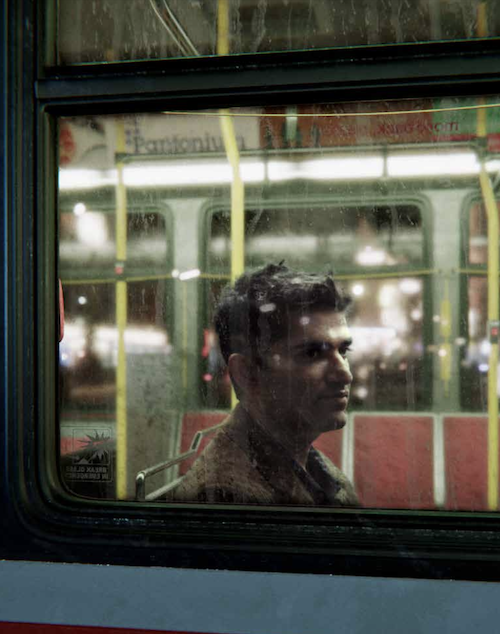