Our company usually hosts a holiday party, but it’s been a rough financial year. How do I cancel the event without facing a mutiny?

Sadly, you can’t. “You will put actual fear into your employees, who will ask, ‘Are we under financial duress? Am I going to lose my job?’” says Alanna Gross, corporate event planner of Event 2 Event in Toronto. You’ll quickly go from boosting morale to doing the exact opposite. So don’t cancel like the Grinch; downscale like the Whos. “A sit-down dinner can become a cocktail reception, or skip the fancy venue to bring it back to the office,” she suggests. And while hiring a planner might seem like an extravagance, it can actually help, Gross notes. “A professional planner knows how to cut corners and still throw a great party,” she says. “That’s their job.”

How can I get better at remembering clients’ names?

Last month, 200 businesswomen gathered at She’s Next, a networking event in Toronto hosted by Rebecca Minkoff, the leader of Female Founder Collective. Her plan to remember every name? Non-existent. “It would be beyond impossible to remember 200,” she says. “I’d be setting myself up to fail.” Since you’re neither a robot nor a computer, you need to win where it counts. Prioritize the important people and partners, Minkoff says. Then there are some old tricks when you meet, say, Mary. “I’ll say, ‘Mary, Mary, Mary’ 10 times in my head. Then when I’m talking to them, I’ll overly refer to them: ‘Hi, Mary! Could you pass me that, Mary?’” Don’t go overboard and spook her, but a few repetitions should have Mary’s name firmly placed in your brain. Even better? “I find one interesting detail—Mary has red hair or Mary has three kids—and I add that.” But don’t panic if you come up blank. “I have two moves,” says Minkoff. One is formal and requires an accomplice: “If I’m with my colleague Elizabeth, I’ll introduce her first, and Elizabeth knows that’s my cue that I don’t remember a name.” The other is casual: “I’ll say, ‘Nice to see you again! Remind me of your name?’” Far better to be authentic than fake it.

One of my VPs has a habit of drinking too much at industry events. How do I raise the issue with him?

As carefully and sensitively as humanly possible—and only if you absolutely must, cautions Donna Ferguson, a psychologist and addiction specialist at the Centre for Addiction and Mental Health in Toronto. Because you know how this convo will go: “Most people aren’t going to say, ‘That’s so nice! I’m so glad you told me this, and now I’m on the straight and narrow,’” she says. “It’s far more likely they’ll be upset and defensive.” And rightfully so. “You’re judging, diagnosing, making assumptions. Some people binge drink but aren’t alcohol dependent; some people drink socially but never at home. There are ranges of alcohol issues, but you’re not the person to diagnose them,” says Ferguson. If the VP doesn’t have the drinking problem you’ve insinuated, you’ve deeply insulted them; if they do, you’ve gone about this intervention all wrong.

“First, ask yourself what your real problem is,” says Ferguson. “Are you genuinely concerned they have a drinking problem, or do you not like their behaviour while drinking?” If it’s the former, you need to go through HR and follow protocol. If it’s the latter, consider skipping the see-me-in-my-office approach in favour of some in-the-moment support. Offer to get them a glass of water or inquire how they’re getting safely home. “That really says it all,” she says. 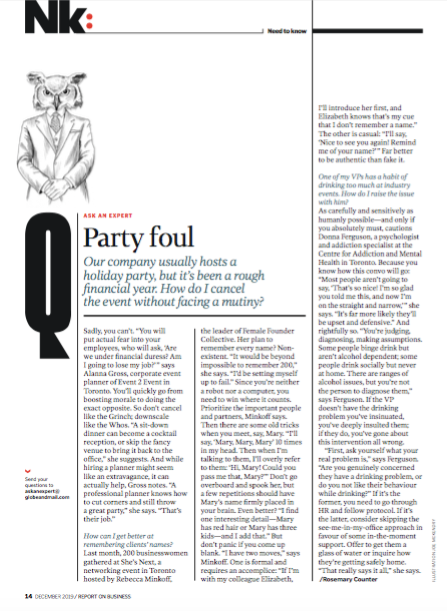