Good, bad and ugly from a century of products ‘for her’

Women are already the Holy Grail for marketers: they make 85% of all brand purchases, three-quarters of women identify as the primary shopper in their household and almost one in four shop at least once a day. But despite being super-consumers, the female is still a curiously one-dimensional figure for many companies—a hair-twirling, calorie-counting, recipe-forgetting pastiche of stereotypes. One thing all marketers wholeheartedly seem to believe, however, is that she loves, loves, loves the colour pink.

It’s been that way for ages, and sadly shows few signs of letting up. Here’s a century’s worth of products thatreached for the elusive female consumer, with decidedly mixed results. Many bombed — others giggled all the way to the bank.

1893: The Kodak camera
At the turn of the last century, memory-documenting photography was regarded as a woman’s pastime. Ads featured the Kodak Girl, introduced in 1893, an independent and fashionable world traveller (yay!) who showed how “Kodak simplicity” made cameras easy enough for even a woman to use (ugh, nay).

1934: Lady Levi’s jeans
Working men were loving Levi’s for 60 years before “Lady Levi’s” launched in 1934—just as women in denim became legal on New York City streets and Audrey Hepburn was popularizing pants. Sales remain strong to this day: the world’s best-known jeans brand had a net revenue of $4.8 billion in 2011, up 8% from the year before.

1959: The Princess phone
“It’s little, it’s lovely, it lights!” claimed Bell of its iconic Princess phone. The rotary version—available in pink, light blue and ivory to match pastel bedroom decor—was updated a half-dozen times, and inspired a slew of copycats (the Cinderella and the Petite), until production ceased for good in 1994.

1968: Virginia Slims
Women just weren’t relating to the Marlboro Man, so enter Virginia Slims, a narrower and more elegant cigarette marketed to ladies looking to smoke their way to equality. The slogan “You’ve come a long way, baby”—empowering and sexist!—still reigns, but market share has dwindled to less than 2%.

1969: The Honeywell 316 Kitchen Computer
This $10,000 recipe-storing monstrosity was the first computer offered to home users. It required a two-week programming course and was advertised with the terrible slogan “If she can only cook as well as Honeywell can compute.” It turned out it was Honeywell that couldn’t compute: not a single model sold.

1993: The Gillette Sensor for women
After nearly a century making men’s razors, Gillette released the Sensor for women: identical blades, but with a wider, “easier to hang onto” handle. Today, Gillette boasts 55% of female buyers—not counting those who just borrow their boyfriends’ blades.

2000: Ford Windstar
Solutions minivan A prototype jointly developed by Ford Motors and Maytag, this minivan had everything but the kitchen sink, literally: It boasted a microwave, washer-dryer, and a wet/dry utility vacuum. Multitasking moms were not impressed, and it never went into production. But the idea of women-only wheels keeps popping up: in Japan, Honda claims sales of its “Honda Fit She’s” have “exceeded expectations.”

2007: Cadbury Thins
In a market saturated by macho ads like Oh Henry’s “Feed your Hunger” campaign, the smaller-sized, 100-calorie line of Cadbury Thins was called a “bull’s-eye with women” by Cadbury execs. Thins became an overnight success, with sales spiking 420% within six months.

2009: Skinnygirl cocktails
“Real Housewife” Bethenny Frankel’s premixed line of cocktails became the fastest-growing spirit brand of 2009 by tapping into a trio of trends—rising booze sales, low-calorie claims and celebrity endorsement. Skinnygirl was so big with the ladies that it sold to Beam Global Spirits & Wine for a reported $120 million in 2011. Cheers, Mrs. Frankel.

2012: Lego Friends
Lego’s girl-centric line is set in Heartlake City, where five shapely friends and their adorable puppies and kittens play in a pastel beauty salon, fashion studio and vet’s practice. A petition demanding Lego ditch the gendernorm-reinforcing toys quickly topped 60,000 supporters, but while the backlash raged, Lego’s sales to girls tripled in 2012.

2012: BIC ‘For Her’ pens
When BIC unveiled its “For Her” lady-pens—pastel-coloured, slightly smaller, but retailing for 70% more—throngs of sarcastic women flocked to Amazon to review the product. “For years I have struggled with using pens made for men,” quipped one. Ellen DeGeneres savaged BIC on-air after the company asked for an endorsement, but today “For Her” are Amazon’s #4 bestselling ballpoints. 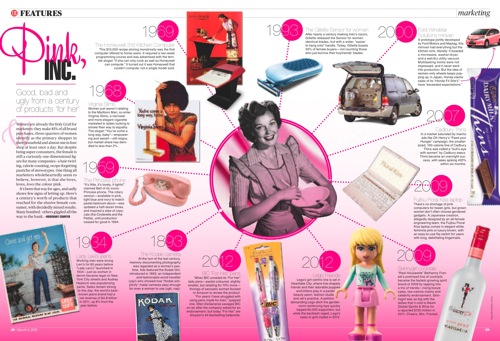