Even before the little royal was born, factories were pumping out the tschotckes.

UNION JACK BOOTIES
Prince Charles’s Highgrove store offers these (in the usual red and blue, as well as pretty pink) as “the perfect gift and keepsake.” The environmentally minded Prince stocks eco-friendly items, and these are no exception: They’re made from vegetable-dyed leather. Accused of a cash grab, the Prince insisted the booties are business as usual: “There have always been baby products for sale on the Highgrove website,” said a spokesperson.

SHH! DON’T WAKE THE ROYAL BABY! BOOK
Count on any number of royal-baby books hitting bookshelves in July, but Bloomsbury’s keepsake, Shh! Don’t Wake the Royal Baby! by Martha Mumford is currently hogging the cute factor. How will a future king ever find peaceful sleep among yapping corgis, marching guards and rowdy parties? The plot’s yet to unfold, but a parachute jump while strapped to the Queen doesn’t sound relaxing at all.

PARTY PIECES
If you happen to run a party-planning business like the Middletons’ online company Party Pieces, and if your elder daughter happens to be the mother of a royal heir, you might be inclined to cash in: Last December, the Middletons added the product line “A New Little Prince/Princess”—with invites, plates and napkins characteristic of “American-style” baby showers—to the e-shelves. Some called the business-op tacky and crass; others, including anyone who’s been to a child’s birthday party, know the princess theme has reigned supreme long before the royal baby was born.

I LOVE MY UNCLE HARRY/AUNT PIPPA BIBS
U.K. company Beauty & the Bib, “keeping dribblers dry” beneath cheekily phrased bibs since 2004, immediately jumped on the royal-baby bandwagon with customized star-shaped bibs declaring, “I love my Uncle Harry,” and “I love my Aunt Pippa” (the word “love” spelled via their signature heart-shaped strawberry). An equally sweet and slightly more imposing “Long may I reign” bib is available in gender-neutral yellow.

ROYAL GUARD PJS
Non-royal babies can at least look the part in sleepsuits and pyjamas—available now at Kensington and Buckingham Palace shops. One-piece sleepers are miniature versions of the iconic Buckingham Palace guard uniform (with snaps for easy nappy changes). They’re also adorably reminiscent of Will’s 2011 wedding ensemble, so could little Alexander McQueen dresses be next? We can only hope so.

ROYAL BABY CROWN from SWEET BABY DOLLY BY JAMI KLEHR
DIY kitsch-lovers are in luck: The craft community has been quick to share creative designs. Among them is 32-year-old Jami Klehr, a knitter and stay-at-home mom in rural Minnesota, whose pattern for a Knitted Royal Baby Crown is proving an instant crowd pleaser. Klehr had the crown idea floating in her head long before the royal baby news, but who can resist a timely hook? And Klehr is expecting her third child this month. “All babies are precious, and all of them deserve to be adorned with a crown,” she says. We like her democratic ideals.

‘TO THE PALACE BORN’ MUG BY MCLAGGAN SMITH MUGS
Scottish-based china company McLaggan Smith Mugs, operating just a few miles from the shores of Loch Lomond, was quick to launch its own royal baby brand of bone china. Designed by artist and illustrator David Luff, mugs feature a “To the Palace Born” design and this “Yummy Ma’am,” featuring a blue-haired Queen pushing a corgi in a pram.

ROYAL MINT COMMEMORATIVE COINS
In July, and in keeping with an old tradition to give silver for good luck, the Royal Mint announced its plans to give 2,013 silver commemorative coins to U.K. babies born on the same day. (An average of about 2,000 Brits are born daily.) Designed by British graphic designer Matthew Dent, the keepsake is engraved with the year and the shield of the Royal Arms. Lucky parents have 60 days to claim the coin, which usually retails for $36—though expect the royal baby batch, and its knockoffs, to pop up on eBay for much, much more.

THE ROYAL BABY FINE BONE CHINA RANGE BY MILLY GREEN
China—teacups, in particular—are a royal collector’s essential. This kids’ set, including bowl, plate, mug and egg cup, all decorated with bunting and prams, was designed by watercolour artist Milly Green. (Green, disappointed by design options when she decorated her daughter’s nursery in 2007, grabbed a paintbrush to create her own.) The table set, she says, “reflects William and Kate as a modern-day couple who are taking the British monarchy into a new accessible phase.” As such, Green hopes the china isn’t destined to collect dust in display cabinets, but used every day. 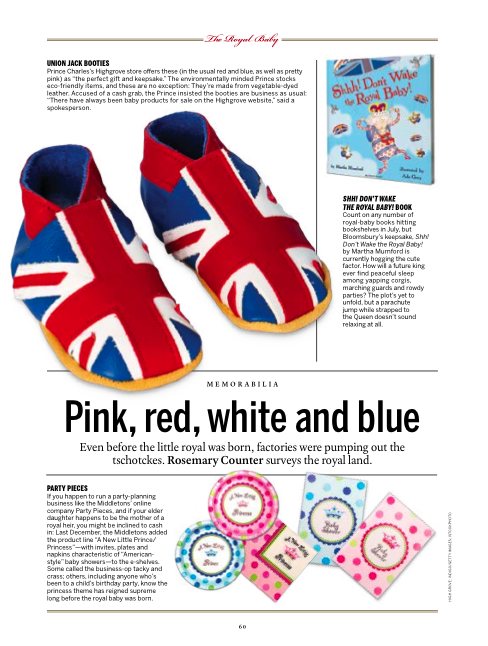 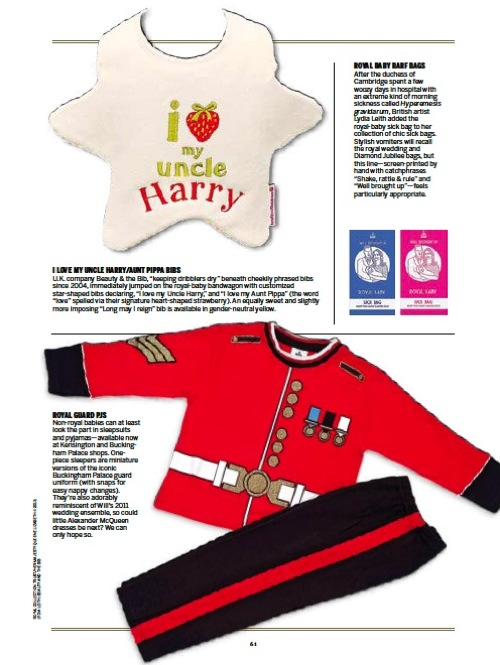 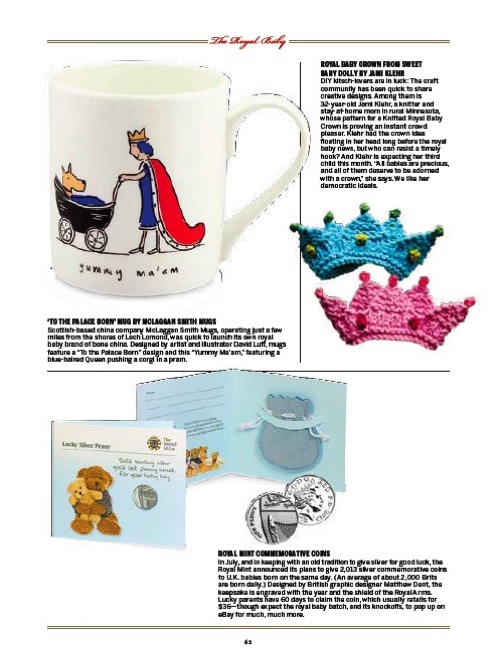