Before she could read, Jade Raymond could play video games. “I remember sitting on my cousin’s lap playing text adventure games on his Apple II,” she says. “He’d read to me and ask what I wanted to do next. It blew my mind.”

Today, Raymond is the one blowing minds, as one of the gaming industry’s most sought-after producers. After building Ubisoft’s Toronto studio from the ground up, Raymond returned home to Montreal last year to do it all again, this time with former employer Electronic Arts (EA) and a marquee game franchise: Star Wars.

A hyper-diligent student, Raymond says she was always focused on progressing “better and faster.” She read as much as possible, volunteering at the library for better book access, and joined an afterschool robot-building club even though it had just one other member. She began working as soon as she was old enough, as a babysitter, waitress, table busser and switch-board operator—“name a crappy job [and] I’ve done it,” she jokes—and when her grades remained near-perfect despite all those extracurricular activities, she switched to a more challenging private school. Video games proved a perfect fit for her methodical, determined character. She remembers a trip to visit family in San Francisco at the age of 12: Initially, her gamer uncle easily won their contests, so she made it her summer’s mission to vanquish him at every game he owned. “I had doughnut-shaped blisters on both thumbs, but I beat him,” she says.

Many hours spent in front of the console led to an epiphany that turned into a career: “Someone makes this, so this must be a job.” After a degree in computer science at McGill and a two-year stint at Sony, she moved to San Francisco and EA in 2000 to produce The Sims Online—a multiplayer, web version of the hit franchise. A part-time gig on gaming industry TV show The Electric Playground turned her into a rising star, but also attracted malicious discussion on gamer forums.

In 2004, Raymond moved back to her home turf of Montreal with Ubisoft, where she was put in charge of Assassin’s Creed. Some gamers protested the choice of a female producer for the violent action-adventure, but then and now, Raymond prefers to ignore the trolls. “It doesn’t reflect the majority of fans, or how the industry really is,” she says. Despite the haters, the Assassin’s Creed games have sold 76 million copies and banked $6 billion in revenue since its 2007 launch.

In Montreal, Raymond met her husband—an industrial engineer who doesn’t play video games—and had the first of two kids. A fortnight before her due date, her boss at Ubisoft pulled her into his office. “I thought he was going to say, ‘What’s the hand-off plan?’” she says. Instead, he asked her to move to Toronto, and build a 350-person studio from scratch to produce what the industry calls “AAA” games, ones with the highest development and promotion budgets. Raymond reached for her rolodex—in two decades, she’s worked with over 700 developers—and handpicked a dream team willing to bet on her leadership and vision. “When you’re competent and fair, you gain people’s respect,” she says.

After five years and one blockbuster—2013’s Splinter Cell: Blacklist—Raymond began to feel a familiar antsy feeling. She’s always had a love of travel and change—the family moved often when she was a child, once living briefly in Jamaica. Now it was time again to try something new. “If I didn’t give myself a kick in the butt, I was basically retired,” she says. In October 2014, she parted ways with Ubisoft.

Raymond wasn’t out of work for long. Last summer, she re-joined EA. Anxious to improve its lacklustre performance in the action-adventure genre, the company brought Raymond back to head up a once-in-a-lifetime project: new Star Wars games.

Paired with writer Amy Hennig, Raymond is building from the ground up again at EA’s Motive Studios. (She’s also in charge of the company’s Redwood, CA-based Visceral Games label). And her leadership has once again drawn in top gaming talent. “She pushes for a work environment that promotes candour, trust and empowerment,” says producer Jean-Francois Poirier. Plus there’s the small matter of Star Wars. “It’s pretty easy to appreciate the adventure ahead.”

It all adds up to a challenge of galactic proportions. Fortunately, her urge towards super-productivity lives on. “Even today, it’s hard for me not to cross the street diagonally to optimize my time,” she laughs. “But I’ve got kids now so I try to set a good example.” 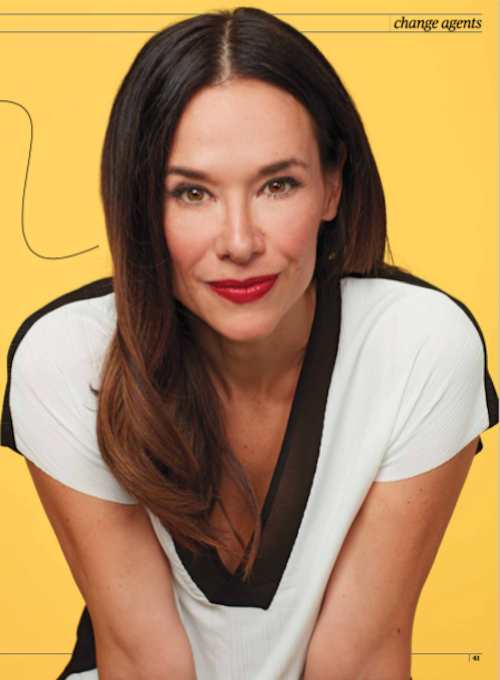 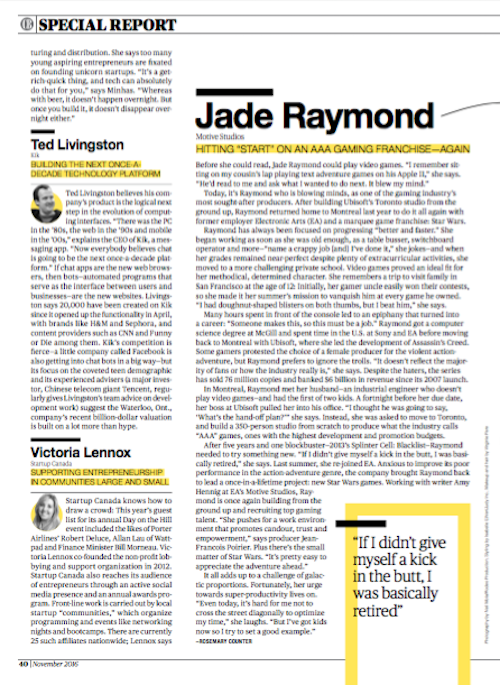