One of my executives hosted a large dinner party—in violation of pandemic-related public health guidelines. Should I discipline the individual?

You can and should, says David J. Doorey, a professor of work law at York University. “This person is in a position of authority and is supposed to show leadership,” says Doorey. “At minimum, it demonstrates a significant lack of judgement.” The effects of the party could have been disastrous and deadly. That’s a good enough reason to take this infringement seriously. But don’t dismiss lingering consequences at the office, either. “If execs can ignore health and safety guidelines, then so can regular employees. And now, you can’t take action against employees without being a hypocrite and inflating even more anger.” Countless factors go into determining an appropriate punishment—up to and including firing. But at the very least, you should officially and publicly write them up for unbecoming conduct. Doorey suggests “a notice to employees saying the behaviour was unacceptable, disciplinary actions are being taken and health guidelines will be followed.” Ideally, that message includes a written apology from the offender.

I don’t have a succession plan to determine who will replace me as CEO of my family company. Who should create one?

anine Guenther is the newly appointed president of Dixon Mitchell; Rob Mitchell is the investment firm’s founder, who graciously stepped aside. Years earlier, Mitchell had begun planning his departure, on his terms, hand-picking the new boss and integrating her into the company. But this ideal situation is rare, even in an industry that’s supposed to know better. “We often advise clients to have a succession plan in place—we’re on them all the time, actually—and still only six of 10 business owners do,” says Guenther. Like a will, it’s your responsibility. Yet also like a will, psychological barriers (family, legacy, mortality, conflict, uncertainty) can hold you back. “It’s so overwhelming that some people give up. They figure they’ll sell when they need to or let someone else deal with it when they die,” she says. But sudden death as a best-case scenario is likely worst-case for everyone else. Lots of responsibility comes with being a leader, but you don’t have to carry it alone; it’s okay and even preferable to involve your top people with the planning process. That ensures there are no surprises when the time comes. “Like everything else, if you plan for it, everything will probably be fine,” says Guenther. “When you don’t plan, the wheels come off.”

My employees have really embraced working from home. Should we downsize the corporate offices or wait to see how people feel post-pandemic?

Many companies have been pleasantly surprised about how happy and productive workers have been at home; no wonder some firms are keen to cut their rent payments. But don’t be hasty, says human resources consultant Janet Salopek. What may seem like a budgetary no-brainer is a major upheaval for your firm. “Going entirely virtual is a complete cultural shift, and for culture shifts to be well thought out, it takes time,” says the founder of Salopek & Associates. She suggests considering many scenarios: back-to-the-office, work-from-home and a few hybrids. “Explore other options rather than all-or-nothing,” she says. And solicit employees’ feedback via surveys and continuing communication (you’re doing that already, right?). “Remember that even if people say they love working at home, they might think totally differently in a year, so it’s wise to keep the door open,” Salopek says. Remind yourself of other savings you’re enjoying—overhead, utilities, supplies—and treat paying rent as an investment in future options. 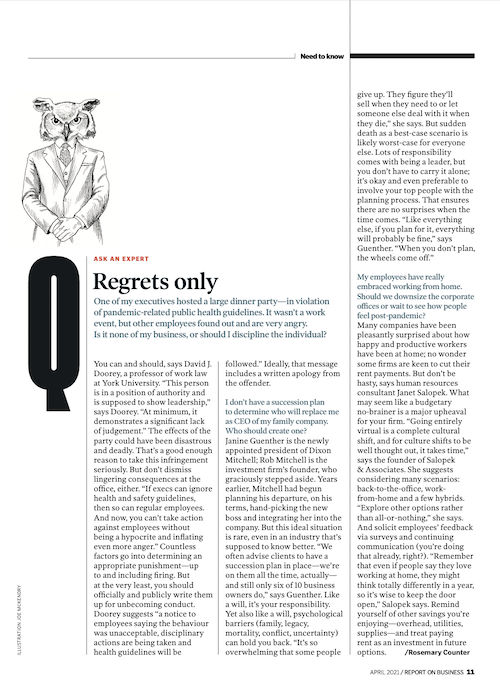