Get three key legal and financial documents in place to be well protected against life’s surprises.

As soon as I turned 18, my mother, a family lawyer, unceremoniously sat me down at the kitchen table. “This morning, we are signing something called a power of attorney,” she said. It sounded like a foreign language. Now Mom didn’t want to scare me, but it was just in case I was in a horrible accident, she said, casually slathering jam on her toast. Let’s just say it wasn’t my best morning.

No one – especially not a young person, and especially not me – wants to think about their own mortality, the possibility that they could get sick or the very real chance that something – anything – could happen at any time. But, if being the child of a lawyer has taught me anything, it’s that things will happen to you in this life that aren’t planned, and preparing for the worst is one way you can assure these bad times aren’t so bad. With that in mind, here are three legal essentials you almost certainly need in order to prepare for potential disasters.

Valerie, a 60-year-old grandmother who lives in Markham, Ont., had once had a really good health plan through her job at an information technology company. But she changed employers and, by a stroke of bad luck, Valerie got sick just a month later.

Though she was health-conscious and ran four times a week, Valerie suddenly became ill with “brutal, all-over pain” one Sunday night. Doctors assumed it was a bladder infection and prescribed antibiotics. But things only got worse. “By Monday, I was really sick and not thinking straight. I knew I should call an ambulance, but I couldn’t even get downstairs,” she said. Luckily, her husband came to take her to the hospital. On Tuesday afternoon she got a diagnosis: Her appendix had burst.

“It would have been a very stupid thing to die from,” she admits, but Valerie came very close. She was in the hospital for two and a half weeks, then home and nearly bedridden for another month and a half. Complicating it all was the fact that, having only been in her new job for a month, she had no short-term disability insurance. Once she was well enough, Valerie applied for and received employment insurance, but the cheques “were so insignificant, I don’t even remember what they were.” Had she had a personal health insurance plan, she’d have had help with additional expenses such as drugs or therapy. Valerie and her minister husband managed to get by until she went back to work. But not everyone is so fortunate.

A 2010 survey from TD Insurance found almost a third of Canadian adults don’t have life insurance, and 60 per cent don’t have critical illness insurance, which provides a lump sum if you’re diagnosed with an illness covered by your plan (you typically get paid if you survive more than 30 days after being diagnosed). Excuses for not having life insurance are plenty: Forty per cent don’t think it’s necessary, 23 per cent feel they can’t afford it and another 23 per cent admit they probably should have it. So why don’t they?

Certainly, it’s confusing. “Everybody has their own needs and goals, so there’s no one-size-fits-all solution,” says Kelly Kay, estate and financial planning specialist with Sun Life Financial. There are many life insurance options – term (low-cost and temporary), permanent (stable and lifelong, typically with a guaranteed premium for the life of the policy), universal (flexible for tax savings but costly) – and even more health insurance. But just as you wouldn’t skip the eye doctor because you don’t know what your cornea does, don’t avoid hiring a financial advisor because you’re confused about insurance. “It’s important to seek the advice of an advisor or planner,” says Kay. “It’s their job to educate you so you can make an informed decision about which plan meets your goals.”

If cost is holding you back, here are some numbers. For a healthy 50-year-old woman who doesn’t smoke, a term life insurance plan that costs $37 monthly will leave $500,000 for her family and estate after her death. As for long-term care insurance, the same woman would pay $108 a month to assure $500 weekly should she become ill, physically dependent and unable to support herself.

“But, for a lot of people, it’s just fear,” says Kay, explaining why people avoid talking about insurance. “You’re dealing with your own mortality, the fact that you can get sick,” she adds. Valerie agrees. “We all think it will never happen,” she says, though she is a living example that it can. But if you’re sufficiently prepared, you can cross one worry off your list and focus on recovery. Valerie ultimately went back to work and opened her own interior design business. “And I promptly got insurance, which, thankfully, I haven’t needed yet.”

Inheritance squabbles are not just a habit of the ultra rich; regular folk are in no way immune to them. When sisters Marlene* and Ellen* were children, they often visited their mother’s friend, an elderly woman with a much-loved piano. While Ellen took no interest in music, Marlene could play the instrument by ear. The old lady would encourage her, saying “That’s lovely, Ellen” – often mixing up their names – and Marlene would correct her. When the lady died, she left her beloved piano to “her special little friend, Ellen.”

At first, it didn’t make any difference – after all, the girls lived in the same house. But when they grew up, Marlene couldn’t bring herself to ask for it outright and risk a fight, so the piano went to the wrong sister. Ellen promptly sold the piano and it was lost to Marlene forever. So even when you have a will, which a Leger Marketing survey found about half of Canadians do, disputes of varying levels of intensity are all too common.

Les Kotzer, a wills lawyer and coauthor of Where There’s an Inheritance (Continental Atlantic, 2009), sees a spectrum of so-called wills. Whether written on a napkin or formally prepared, Kotzer asks the same questions: “Is it up-to-date? Is it problematic?” An old or poorly-worded will – “antiques and memorabilia are both potential minefields,” says Kotzer – can be contested and can lead to the destruction of your family. “And if you don’t have a will, the law writes one for you,” explains Kotzer. It’s called dying intestate. The laws vary from province to province, but usually a large lump sum is split between your spouse and any children.

Even if that sounds fair, you probably still need a will, says Stan Rule, an estate lawyer in British Columbia. It’s not that everyone needs a will, he explains, but “it’s hard to conceive of a situation where you’d be better off without one.” Besides doling out cash, says Rule, your will names an executor or trustee to pay off creditors, handle your assets and arrange your funeral.

If you have young children, you can appoint a guardian for them. If your children are older but not quite old enough to handle a large lump sum, you can create a trust for them. “You may even want to make some charitable donations,” Rule adds – something the courts would never know to consider.

Though it may not be dinner party fodder, talk about your will with your family and friends. Make your wishes known so they’ll be more likely to be met. Had anything been mentioned to Marlene and Ellen’s mother, for example, their situation could have been avoided. “Communication is important, and there are cases where you may choose to favour one child over another – maybe one’s wealthy and one’s struggling,” says Rule. If you involve your family in estate planning, they won’t be shocked and hurt later on.

When you have a will, don’t file it away and forget about it. Keep it in a safety deposit box or fireproof vault, making sure your executor knows where to find it, and review it every few years. “A will needs to reflect your current situation,” says Kotzer. Marriages, separations, births and deaths may affect your last wishes, he says. So you should revisit your will any time your situation changes. “Our lives aren’t static – and neither is a will.”

A woman called in to a radio show to speak to Kotzer. Karen from Ottawa explained she had been called to the hospital when her mother, who suffered from Alzheimer’s, broke her hip. “Here, the nightmare starts,” Karen explained.

Her mother needed surgery, but without a signed power of attorney – the legal document that allows others to make health and financial decisions should you become incapacitated – Karen couldn’t take the helm.

The social worker said she needed a power of attorney, but no lawyer would sign it now because she already had Alzheimer’s, said Karen. It took a year of applying for bonds and waiting for papers to be filed, during which time the public trustee took all of her mother’s possessions. They took everything from the house: “all the crystal, all the china, all the fancy carpets, all the things she’s worked for. Everything is gone. I have nothing that I can remember her by,” Karen said.

Terminology and technicalities vary in every province, but the gist of the power of attorney process is the same. There are two types, explains Jean Blacklock, coauthor of The 50 Biggest Estate Planning Mistakes…and How to Avoid Them (John Wiley and Sons, $24.95). “One deals with the possible loss of decision-making abilities around personal matters – health care and medical matters. It allows you to appoint someone else to make these decisions for you,” she says.

“The other power of attorney deals with property. When you become incompetent, the person named will step in and deal with your financial affairs,” says Blacklock. It goes without saying, but choose your power of attorney carefully. “Choose someone really trustworthy, someone who makes financial decisions like you do, and get them involved with your finances to see how they handle it,” she suggests. It sounds simple enough, but elder abuse and fraud are rampant. “It happens every day in Canada; people we trusted are fraudulent,” Blacklock says.

And just as with wills, don’t be tight-lipped. “If people know you have a power of attorney and who you’ve named, it’s less likely someone will do inappropriate things. It’s when there’s secrecy and privacy that these things happen,” says Blacklock.

So face your fears and talk about worst-case scenarios with your partner and children. “In my experience, women are often the drivers in estate planning,” says Blacklock. “We look at it as an item on the list – redo the hardwood floors, update the wills – but we tend to drag it along and then rush it to make it all go away.” Instead, take control of disasters before they happen. The same unlucky event could be chaos for your friends and family or merely a bump in the road. It’s your decision. 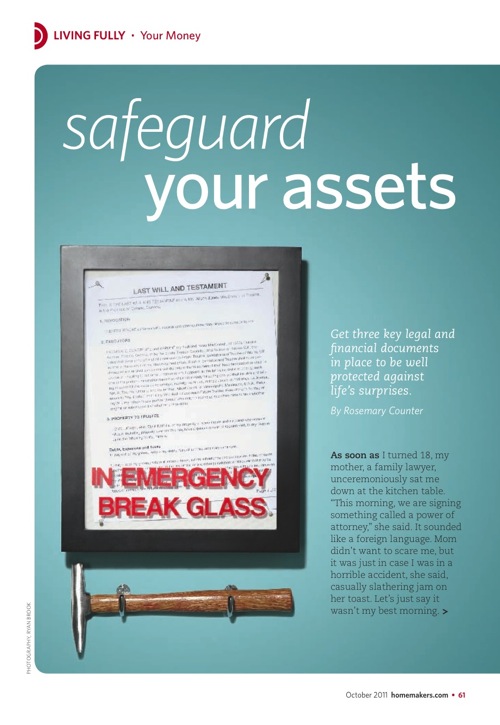 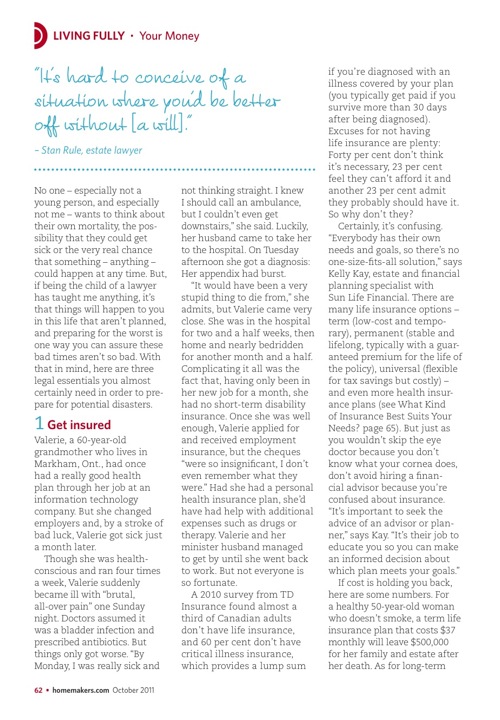 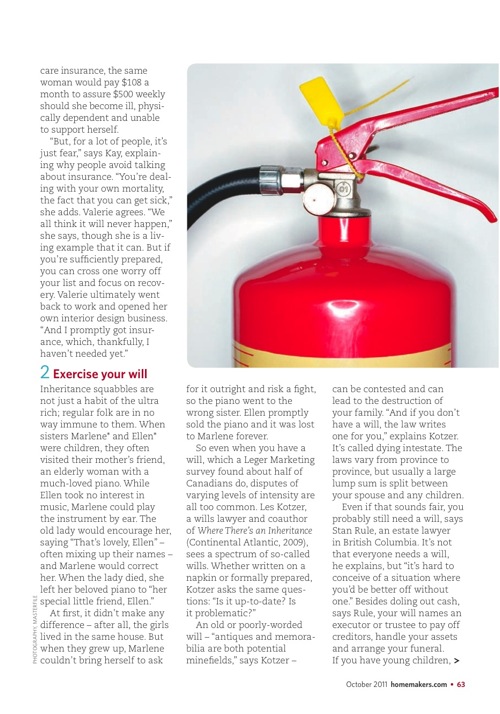