Serial with a media scandal twist

On March 10, 1987, at 9:40 p.m., the body of Welsh private investigator Daniel Morgan was discovered in the parking lot of a seedy London pub. The 37-year-old was struck three times with an axe in the back of the head and once more in the face, where the axe remained. His Rolex watch was gone, but £1,100 cash sat in his pocket.

If none of this seems familiar, it’s because what is widely considered the most investigated murder in British history rarely lands in the mainstream press. U.K. journalist Peter Jukes stumbled on the Morgan case four years ago while investigating the News of the World phone-hacking scandal. “Intrusions, bribery, bugging apartments, tapping phones and hacking voicemail—we call them the dark arts, and they began with the Daniel Morgan murder,” says Jukes.

At the time of his death, Morgan and his business partner, Jonathan Rees, were drinking together, despite their ever more acrimonious relationship: £18,000 had recently disappeared from the firm in a supposed robbery that Morgan suspected was a set-up. Morgan was having an extramarital affair with a woman who now lives with Rees. Det. Sid Fillery, assigned to investigate the crime, later went into business with Rees, trading illegally acquired information with the press. At the time of his murder, Morgan had allegedly approached News of the World with a massive story—which Morgan estimated to be worth £250,000—revealing a web of corrupt police offcers operating a cocaine smuggling ring.

“This is a story about media corruption, so the media won’t touch it, and why?” ask Jukes. “Because many of them have been involved.” In almost three decades, five murder inquiries and one collapsed trial have brought no answers or solace for Morgan’s family. “We’ve been lobbying for years for public scrutiny of the case,” says Daniel’s brother, Alastair, now 67. “The last government was totally unsympathetic to us, which infuriated me because I thought, ‘Can’t you see how serious this is?’” They didn’t, or wouldn’t, and so the murder went unsolved.

But the media landscape has since shifted. The massive success of the podcast Serial and Netflix’s Making a Murderer provided renewed interest in true crime stories, a new medium to better tell Morgan’s complicated and intertwining story, and a full bypass of the traditional media channels that had previously blocked them. And the advent of crowdfunding could help fund the project without depending on government or media.

Jukes is the host, merging old facts with new evidence as it appears. “We’ve recently conducted a five-hour interview with a former police officer who went undercover at Morgan’s rogue detective firm—taken over by Rees and Sid Fillery within a year of Daniel’s murder,” he says. Even when the lead investigator retires and immediately goes into business with the main suspect, Jukes remains an unbiased reporter. “There’s a burden on me to step up and be the objective narrator,” he says. As with Serial, listeners can visit the website to see photographs, newspaper clippings and evidence.

Alastair hopes the podcast will garner global interest, but, he says, “I’m just grateful, after all these years of being told to go away, that someone was interested.” His unabashed interviews carry the 10-episode series and confirm the swirling rumours about Daniel’s plan to expose the police. “‘All police are bastards,’” Alastair recalls his brother saying. But even he has questions. “I’d be lying if I said I knew who did what, but I have no doubt who was involved. The question now is how did they get away with it?”

Untold probably won’t solve this mystery. Still, “there is a kind of justice in transparency, even if there are no convictions,” says Jukes. “They might get away with murder, but not without infamy.” 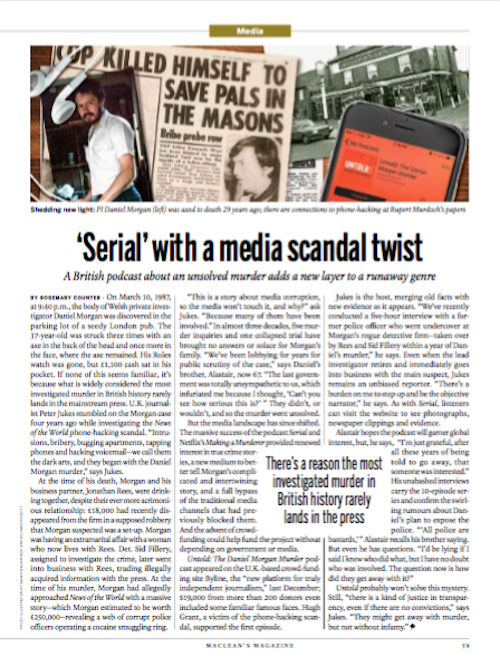