Ever wondered who takes the most selfies? It’s Filipinos, and Manila has the museum to prove it

After 19 hours on packed airplanes, and with a brutal 12-hour time difference, you couldn’t pay me to snap and send a selfie. (I kid; for the right price, you can!) But in this moment in the busy Filipino capital of Manila, I’m all alone in my grey-faced cynicism. People pour off the plane and dig through suitcases for their selfie sticks; they gather in groups and smile wide. Welcome to the Selfiest City in the World.

For 5,000 years, Manila was known as “the Pearl of the Orient,” but since last year, it has earned a new modern title: Selfie Capital of the World. research by Time Magazine measured the average number of selfies taken on Instagram over seven days, across all time zones, and found that Metro Manila snapped far more selfies — 258 per 100,000 people — than even the closest competition: Manhattan (202 shameless selfie-takers), Miami (155 beach-happy selfies) and Anaheim, Calif. (an almost-humble 147 selfies). Fascinatingly, Kardashian- mecca Los Angeles didn’t make Time’s Top 100, whereas the Philippines snagged three more spots on the list.

For a country obsessed with selfies, celebrity and social media — more than 90 per cent of the population are active on social networks, compared to two out of three Canadians — topping the list is a brag-worthy feat. To celebrate, just eight months after Time’s findings, Manila opened the doors of the world’s first and only “selfie museum”: Art in Island.

The “museum” descriptor is something of a misnomer. It’s more of a theme park, with floor-to-ceiling interactive im- ages created (or re-created) over four months by painters tapped from all corners of Asia, specifically for visitors to pose in front of — for selfies, or the more old-school “assisted selfies” of previous generations. “We chose the Philippines because Pinoys like art and taking pictures,” says CEO yun Jae Kyoung.

En route, my guide and I brave six lanes of bumper-to-bumper rush-hour Manila traffic, which creeps along so slowly that vendors sell roasted cashews and fish crackers between lanes. In passing cars, drivers snap selfies of their frustrated faces. Maybe this is the cynicism again, but I must ask: Isn’t this all a little, um, selfie-indulgent?

“Not if you’re serious about your selfies,” says my guide Pearl Caritativo, without even a hint of sarcasm. For her and many others, selfies are a big deal.

Just look around: Currently atop bestseller lists is the reigning Selfie Queen Kim Kardashian, maybe performance artist and definite egomaniac, whose 400-page photography book Selfish has been called “unexpectedly revealing” (really, Telegraph?) and “a document of mind-blowing vanity” (better, Slate). Last September saw Selfie the TV show, which in true selfie fashion was passé and cancelled by November. Similarly old news is last March’s “best selfie ever!”, a.k.a. ellen deGeneres’ celebrity-filled Oscar selfie, which now feels about as quaint as playing Snake on your Nokia.

If you’re totally convinced we invented selfies, however, know the very first selfie was snapped in 1839 by Philadelphian chemist and amateur photographer robert Cornelius, who ran into the frame and sat still for a solid minute. Picasso and van Gogh rocked self-portraits, of course, as did Polaroid-enthusiast Andy Warhol (who you just know would have gone buck wild for Instagram).

The Oxford dictionary declared “selfie” the word of the year in 2013, defining it as “a photograph one has taken of oneself.” That’s since expanded to include “ussies” (or “groufies”) for groups and even “belfies” (a butt-specific selfie, and I’m sorry). Smart- phones have become the great selfie equalizer and encourager: These days, 93 million selfies are taken globally per day. Every two minutes, we snap more pictures than were taken in the entire 1800s.

Not that I’ll learn any of this at Art in Island, which is all about experience. Just as most museums are snootily turning up their noses at selfies beside high art, if not all in-gallery photography entirely, Art in Island is embracing the inevitable. “Whenever you visit an art museum, you are always expected to just look around quietly,” reads the museum’s Facebook page. “you don’t even have a single proof of you being there.”

So it’s shoes off (for real) and this is happening. A second time for Pearl, as she’s pre- visited and studied up. “When I went last week, I didn’t bring a friend and got too lonely,” she says. That you need a friend for a selfie, I mention, is pretty ironic. But for 200 Filipino pesos (a bargain $5 Canadian bucks), you can buy a bud in selfie stick form. And just in case I’m not sufficiently enthusiastic, Pearl’s kindly brought one for me too. Selfie sticks aren’t mandatory for Art in Island, but few patrons have arrived empty-ended.

Some are an easy sell — Me as a mermaid? done! — while others go so far as to crop and delete portions from the origin- al for selfie-snappers to replace with their own image. Posing as a harvesting peasant woman in Jean-Francois’ The Gleaners, for example, feels as icky as it does egotistical. A recent Ohio State study linked excessive selfie-taking with narcissism and even psychopathy, but I digress.

Meanwhile, posted signs encourage us all to be our best selfie: “Forget all those poses you always do when taking pictures! use your creativity and imagination to think of new angles, facial expressions and ideas to make the photo more amusing and memorable,” they read. It’s not bad selfie advice, at the Manila selfie museum or anywhere else. 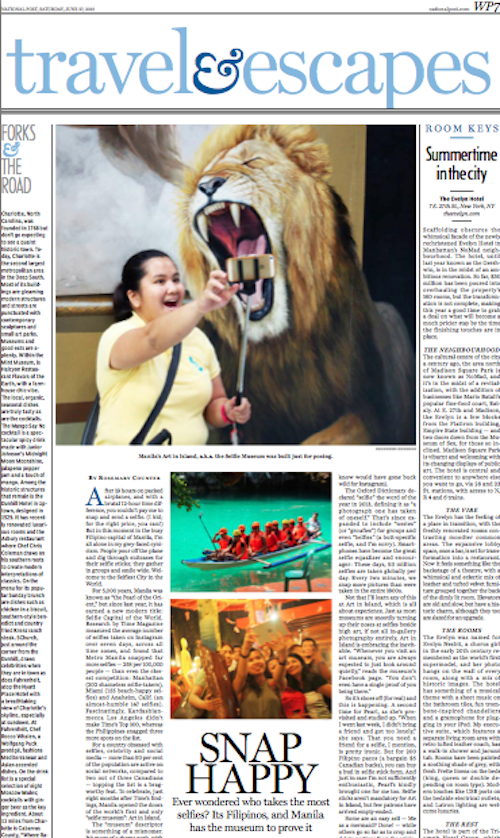