When thousands upon thousands of politically minded women needed a makeshift symbol for their movement at January’s anti-Trump women’s marches held worldwide, they reached into their craft closets and took up an old skill: knitted pink “pussy hats” became the must-have accessories. It might have been a bad day for the brand new U.S. president, but it was a very good day for anyone in the yarn business; in the weeks leading up to the marches, wool of every shade of pink flew off store shelves around the world.

In a small Ontario town far away from the excitement, staff at the Spinrite Yarn Factory Outlet—a decidedly apolitical space—shared the industry’s cause for celebration. “It was pretty terrific,” says CEO Ryan Newell with a smile. In 15 years at Spinrite, Newell has led the steady and surprising growth of a 65-year-old company that should have, logically, vanished a half-century ago.

“Spinrite is in the old, old business of yarn,” says Chris Dowding, a Deloitte partner and Spinrite’s coach in its successful pursuit of the Best Managed Companies designation this year. Even he was surprised to see Spinrite’s enduring success. “Most textile businesses are not in Canada anymore,” Dowding explains. “And of the businesses that made yarn in 1952, almost none still exist.”

Instead, Spinrite is the largest craft-yarn company in North America. Based just where it always has been—45 minutes outside Kitchener-Waterloo, in the teeny Ontario town of Listowel—Spinrite imports bales of acrylic and cotton from Turkey and Portugal to be spun into thread and twisted into yarn. With the help of 500 employees across two production facilities (the other is in North Carolina), Spinrite packages and sells more than 50 million balls of yarn a year under seven brands to big retailers like Michaels and Walmart, as well as smaller independent shops. Among the latter is Toronto’s The Wool Mill, whose long-time owner, Wendy Mortimer, knows why manufacturers like Spinrite are thriving today: The once “lost art” of knitting has most decidedly been redis- covered. “It’s back with a whole new generation of young women,” she says.

One of these women is Alicia Bint, a 33-year-old freelance illustrator from Milton, Ont., who was taught to knit as a child by her grandmother. “I don’t know exactly what brought me back,” says Bint, “but suddenly it seemed like something people my age were doing again.” Knitted fashions were popping up on runways and at craft shows, as well as on Pinterest and other social media. While Bint credits grandma for providing the basics, she admits, “YouTube filled in the rest.”

Yes, there are YouTube tutorials, without which newbies like Bint would “probably give up.” It might seem incongruous, but modern technology (including Pinterest, Instagram and Ravelry, a sort of Facebook for knitters) has actually fostered a boom in the craft that few saw coming, as stitchers use the Internet to swap patterns, share progress and offer tips—the kind of communal activity once conducted in living rooms.

Newell saw the opportunity early on. A 30-something Listowel native with a business background but little experience with Spinrite’s product—as a male non-knitter, he’s firmly outside the target demographic—he felt the company could prosper by ushering the old art into the new digital age. Not everyone believed him. Chief financial officer Jeff McCuaig recalls questioning whether an aggressive online strategy would play with yarn buyers when he joined the company in 2008. “Is a 55-year-old knitter really going to be sufficiently Internet savvy?” he recalls asking. “But they are.”

And how. In the past decade, Spinrite has developed active followings on Pinterest, Instagram, Facebook, Ravelry, YouTube and (to a lesser extent, since it’s less visual) Twitter. The company uses the handle Yarnspirations, which is also the name of its own blog (and subtle e-commerce storefront). Featured prominently on all of Spinrite’s platforms are creations by the tight-knit knitting community’s trusted “influencers,” whom Spinrite supplies with samples of new colours and styles. As a result, the site is “first and foremost a hub for inspiration,” says marketing vice-president Denise Darragh.

Indeed, the sales strategy at Spinrite has been cleverly reworked to unfold almost backwards. “We know nobody wakes up and says, ‘Today I need a ball of yarn,’” says Newell. “It’s the inspiration that fuels the demand, not the other way around.” This shift has affected the company’s entire business model. Once upon a time, knitting patterns represented a huge part of Spinrite’s sales. But not unlike the copying of music or movies, the influx of boot-legs online completely destroyed pattern sales as a reliable revenue stream. Instead of waging war on illegal downloads, Spinrite embraced the trend. “We give that inspiration away,” Newell explains, “and let that drive the purchase.” Yarnspirations employs four full-time designers to create new patterns, distributed via thrice-weekly emails and a monthly digital lookbook.

The goal is not necessarily—as you might expect—to fuel e-commerce activity. Spinrite’s online sales represent only 7% of its annual revenue, and while boosting that is on the agenda, Darragh says the company knows and respects how its customers like to shop. “The majority still want to buy at a bricks-and- mortar store, because the feel of the yarn is so important,” she explains. “They really want to touch it.” To keep these shoppers engaged, the company devotes significant resources to the seemingly arcane task of designing new yarns. “Lots of people would say, ‘Yarn is yarn,’” says Dowding at Deloitte, “but Spinrite is actually really innovative in the world of yarn.” For instance, it sends reps to runway shows in Europe to scout for new trends; the product development team takes that intel, weighs it against sales stats and buying forecasts, and incorporates it all into creating the dozen new yarns the company launches each year. “With the same raw material, we can make hundreds of different colours, textures and thicknesses,” McCuaig explains. “The possibilities are pretty much endless.”

This commitment to doing things differently helps explain precisely why a small-town yarn business like Spinrite happens to thrive in 2017. As Darragh puts it: “It’s kind of delightful that something so low-tech lends itself to such benefits from technology.” 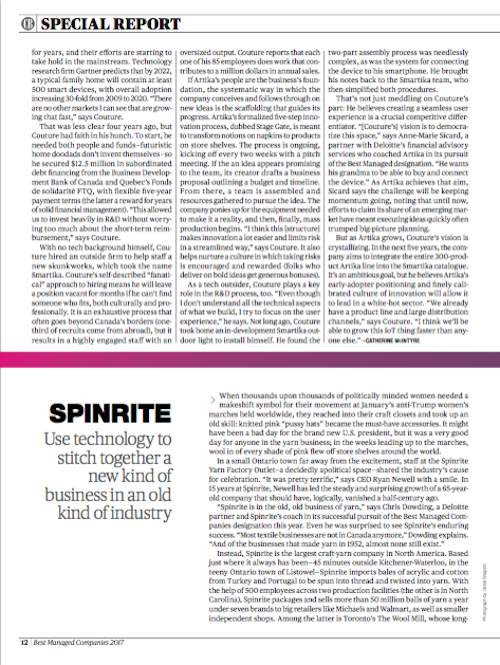 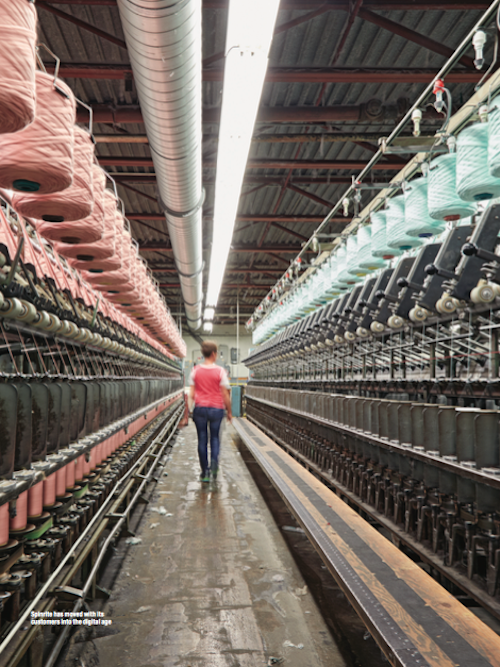 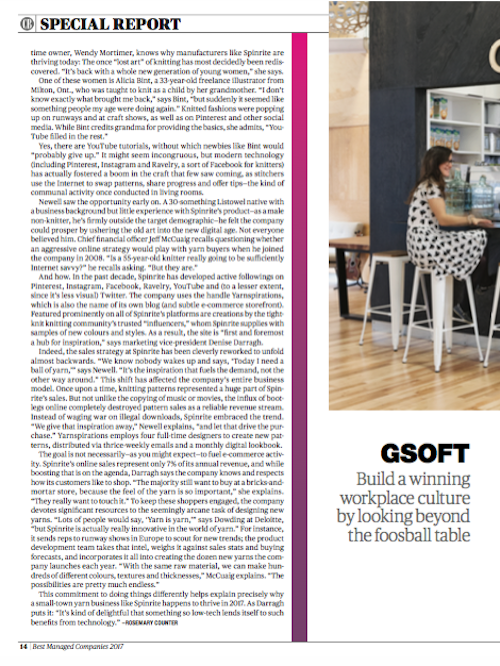