The Australian bake sale that inspired our pay equity issue

As Madeline Price added the finishing touches onto Feminist Week, an event the University of Queensland student had spent months planning as the VP of gender and sexuality of the UQ Student Union in April 2016, she noticed a gap in the schedule. “In a week’s worth of panel discussions and workshops, from 9 a.m. to 9 p.m. every single day, I had one empty Tuesday morning spot,” says the 24-year-old. “I thought nobody comes to campus then; let’s just have a bake sale.”

Making the bake sale appropriately feminist, however, was the student union’s added twist: “To start a discussion about pay inequality in Australia, we set a standard price for a baked good—$1 for a cupcake—and then you get a discount based on your particular economic inequality,” says Price. The idea’s been seen before and after, including this Maclean’s issue, to spark conversations and awareness of the wage gap, which in Australia is lingering around 18 cents. The Gender Pay Gap Bake Sale at Queensland would also consider class, race, disabilities and sexuality. White men would pay full price.

Predictably, following the announcement of the upcoming event, detractors took to social media. “The bake sale itself constitutes discrimination under both Queensland and federal anti-discrimination law,” wrote one Facebook commenter. The sale was “blatantly discriminatory against men to try and make some asinine political point,” charged another. Criticism broadened and intensified: “This is exactly why more people are starting to reject feminism.”

Like many internet outrage cycles before, an unsuspecting Price then watched a trickle snowball into a storm. Someone—“we have our suspicions but aren’t 100 per cent certain,” she says, mentioning some poorly organized “men’s rights groups” on campus—grabbed a screenshot from a private Facebook group and sent it to the Brisbane Times. They interviewed Price for a story, “University of Queensland Union to host bake sale that charges based on gender,” seemingly a breezy piece on the local campus controversy. “But by the time I woke up the next morning, I had like thirty missed calls from various media outlets.” Price’s throwaway bake sale would eventually land at the Washington Post, the Daily Mail and the Guardian.

Despite the previous week’s mounting online hate, including comments, messages, emails to her personal and professional accounts, it was this moment that Price felt control was lost. “I’ve been a feminist in online spaces for some time, so at first it wasn’t a surprising response,” she says. The worst were violent images, name-calling (“ugly feminist c-nt” was oddly popular, she recalls) and both rape and death threats, but phone calls were a new invasion. “I’ve always understood the online world as something that could be contained—I could always turn off my computer. Someone breathing on the end of my line in the middle of the night is pretty scary.”

So just four days after its original piece, the Brisbane Times ran another story: “UQ bake sale ends in online rape, death threats.” Luckily, this gloomy headline buried a more uplifting real-life truth. After all the vitriol, explains Price, she learned an uplifting lesson about trolls. “Everyone that deep in the online world doesn’t ever come off,” she says.

Instead, compared to the usual modest sales to hungry students in passing, several hundred people showed up on that usually sparse Tuesday. All surrounded by television cameras, a long lineup held staff, students, even some visitors who trekked to the Queensland campus to show their support. And they plunked down much more than a dollar. “Some people said, ‘I’ll take one cupcake, here’s twenty bucks!’ ” Hundreds of dollars in profit went to Share the Dignity, an organization that provides sanitary products to women living in homelessness, and baked goods were all sold out in an hour. All thanks to abusive creeps and sexist trolls, Queensland’s Gender Pay Gap Bake Sale proved more visible, successful and profitable than anyone thought possible, and the wage gap discussion grew louder than before. 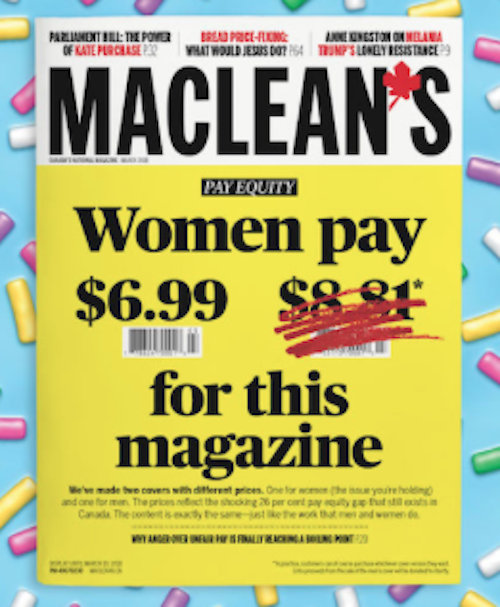