Cruella created as a woman not fit for ‘polite society’, but also a clever social comment

Cruella de Vil needs neither introduction nor explanation (even if, due to some strange raised-by-wolves existence, you’d never heard her name): The reviled supervillain is equal parts cruel and evil. In Italian and Polish, she’s Cruella de Mon – demon – and in French, she’s Cruella d’Enfer – Cruella from Hell. Disney set her infamous villainy to catchy music: “Cruella de Vil, Cruella de Vil, if she doesn’t scare you, no evil thing will!”

Besides the devil himself, no earthly entity is more terrifying than the women with whom he colludes. The witch trials proved this for hundreds of years: These women often reject matrimony and maternity, they form tight secret alliances, they have the audacity to be old and still sexy. If they’re blessed with power or property, they’re especially dangerous. Probably illogical, emotional and hysterical too.

No wonder Dodie Smith, beloved English author of The Hundred and One Dalmatians, when imagining and creating one of the best and worst villains in literary history, leaned into these familiar tropes of bad women not fit for polite society. In 1956, when the book was published, there was a word (it starts with an F) circling back into vogue for women like that. And while Smith would likely never have dared to call herself a feminist, much about how she lived her life said otherwise.

Smith married at the ungodly age of 43, having spent her childbearing years aspiring to be an actress and playwright. She found success only behind a male pseudonym, and then was promptly outed as a woman anyhow. The drab headline: “Shopgirl Writes Play.”

After relocating to California, Smith turned her pen to novels and published I Capture the Castle, her feminist magnum opus about an unbreakable young woman surviving the depression, in 1948. But she was made famous by her next work, The Hundred and One Dalmatians. About puppies.

Now reconsider Cruella: She’s the only daughter of a family dynasty without a much-preferred male heir; she’s a rebel girl expelled from posh private school for bad behaviour. She doesn’t believe in love or marriage – except those of convenience, like hers to a subservient furrier, who she insists takes her last name. She later runs her own fashion business, promotes female talent, gets frustrated and infuriated when this talent is squandered in favour of domesticity (“More good women are lost to marriage than war, famine, disease and disaster,” deadpans Glenn Close in her 1996 version of the iconic antihero). Cruella can’t cook and hates children. Hell, she doesn’t even dye her hair.

A woman like that, reads the sarcastic subtext of Dodie Smith, is probably so bad, vile and evil to her very core, that she also kills puppies. Put this way, Cruella is clear and clever social commentary. Too bad men in 1956 were not in on the joke.

A year after the novel’s publication, Walt Disney bought the film rights to Dalmatians. He was fresh off the underperforming Sleeping Beauty, with its do-nothing princess literally sleeping until her prince arrived, which had almost bankrupted his studio. He assigned Cruella to senior animator Marc Davis, one of his so-called “nine old men.” (They’re exactly as you’re imagining, I promise.)

“I put something of all the bad women I’ve known into Cruella,” Davis said. “Bad,” as usual, is subjective. Actress Tallulah Bankhead, on whom he based his drawings, to me sounds wicked fun: Rich from a prominent Alabama political family whom she publicly opposed in her support for civil rights and women’s lib; she drank like a fish and smoked 120 cigarettes a day; she was a bisexual divorcee known for many, many romantic conquests and getting naked at parties.

With slight tweaks, bad female behaviour hasn’t changed much over the years. In the 1996 live-action film, Cruella needed an update and a job – a fur-loving fashion-house maven, naturally – and just as Bankhead had inspired before, none other than Vogue’s Anna Wintour became the new face of bad women. Like fashion, everything old is new again: She’s cold, mean, selfish, dominant, ambitious and demanding.

“I was really determined that Cruella be as bad as possible,” said Close, adding the villain “basically has no redeeming human characteristics. Except she does have a sense of humour, albeit wicked.” (To me and many women, traditionally unfunny, that counts.)

This weekend, another Cruella comes to the big screen. Set this time in late 1970s London, this film’s Cruella is a scrappy up-and-coming fashion designer facing her sketch-stealing boss and the old-world establishment that would rather she not make a scene. Obviously she still does. “I am woman, hear me roar,” says Emma Stone, who plays the titular character, quoting Helen Reddy’s 1972 feminist anthem, though Stone’s quick with a third-wave nod: “I’d like to remind you all that I’m doing this in heels.”

I’m all for an origin story, and can hardly wait to see her transition from meek to malevolent, but I hope Disney won’t make this Cruella too sympathetic – she’s born bad, remember, and everything that makes her so bad is also what makes her so good. Also likeable, and the older I get, dare I even say relatable. The further I age out from Sleeping Beauty, the more awake and powerful I feel, the more wildly and eccentrically I dress, the more I yell and swear when I drive, and the more I like Cruella de Vil. Puppies notwithstanding, Dahling. 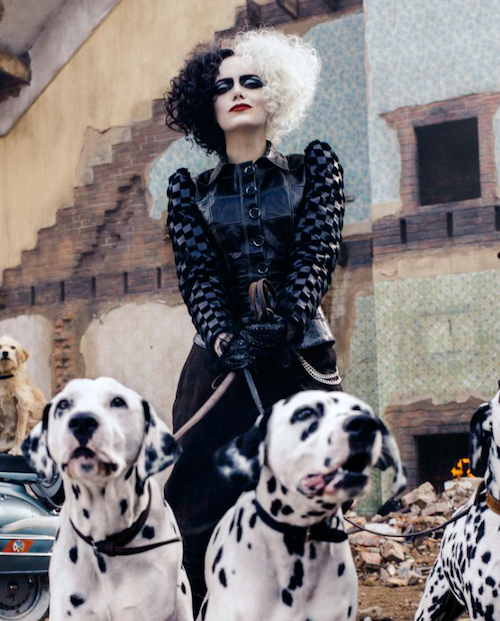