The Case For Telling the Honest Truth

At the Barrie, Ont., radio station where he works, Kirk Pearson is semi-affectionately known as “Captain.” The 34-year-old ad sales manager leads a team of 13, and among them he is known for saying exactly what’s on his mind, without filter—much like the Star Trek character that inspired his nickname. Pearson’s response to a recent client rejection revealed little sympathy for his team’s hurt feelings: “Look, if I come back here in one minute and this shit’s still happening, then I’ll be really upset.”

Brutal honesty like Pearson’s can be shocking—if only for its rarity in the über-PC, touchy-feely work world of 2016. “The thing companies need most is often what they get least: the truth,” says Mindy Mackenzie, author of The Courage Solution: The Power of Truth Telling with Your Boss, Peers, and Team. Mackenzie, too, has earned a nickname—“the Velvet Hammer”—for her ability to blurt out what others suppress. “People will get frustrated, critical and angry,” she says. “They’ll murmur with co-workers and complain to their spouse, but they’ll never, ever find the courage in a meeting room to say, ‘I disagree with you, and here’s why.’”

Gone are the straight-shooting bosses of yore: Today’s business people tend to couch difficult messages in soft, minimizing language. They might craft an email, carefully choosing their words and monitoring their tone so it doesn’t offend. Or maybe they’ll coerce someone else into delivering not-so-great news. Whatever the approach, meaning gets diluted or even lost—all to avoid the slight momentary discomfort of telling the truth.

Driving this communication failure, says Mackenzie, is simple human nature: “We like to agree and to be agreed with, and we like to be liked.” Criticism feels anathema to these impulses, especially when it stirs emotional reactions (including tears).

Yes, blunt talk can hurt, but the free flow of both criticism and praise is, according to career coach and former tech exec Kim Scott, “the single most important part of managing people.” At a recent keynote, Scott spoke about what she calls “radical candour,” a communication style that arises when the speaker both “gives a damn” and doesn’t fear angering or o ending the listener. Criticism without caring makes bosses seem like jerks, and caring without criticism makes them wimps, but criticism plus caring eliminates ambiguity and passive-aggressiveness, creating better relationships and results. “When you challenge people directly and show them you care personally, you help them do their best work,” Scott said.

Brutal honesty works best when it doesn’t come as a complete surprise: “Do a personal declaration of your leadership strategy,” suggests Mackenzie. “It’s your responsibility to share openly who you are and what you expect.” For example, since Mackenzie is not a morning person, she has told her staff not to take it personally if she’s not exactly chipper before coffee.

But what of social niceties? Honest feedback doesn’t necessarily preclude politeness, says Edmonton business etiquette expert Joanne Blake—especially when you preface things by asking permission to be blunt. Once, after a presentation, a (white, male) student with dreadlocks asked Blake if his hair- style might hinder his job prospects. “Do you want my honest opinion?” she replied, preparing him for some tough love while giving him an out if he actually didn’t want to hear it.

And if you pride yourself on honesty, don’t just deploy it when things go wrong. “If you’re going to be blunt, be very sure to offer compliments and appreciation too,” says Blake. After all, kudos are extra sweet when everyone knows you only tell the unvarnished truth. 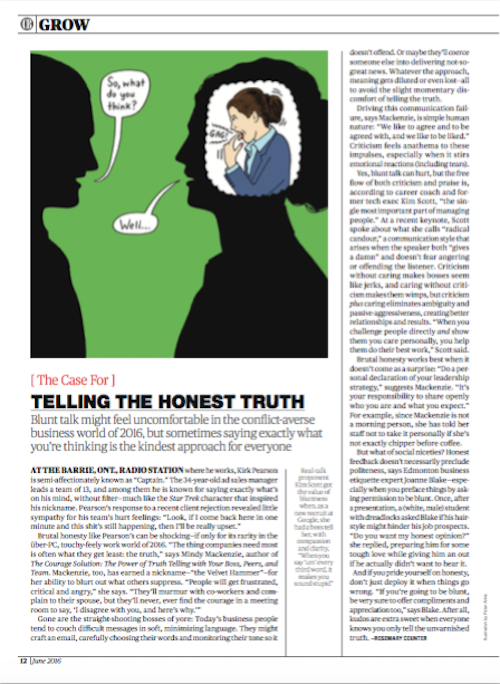